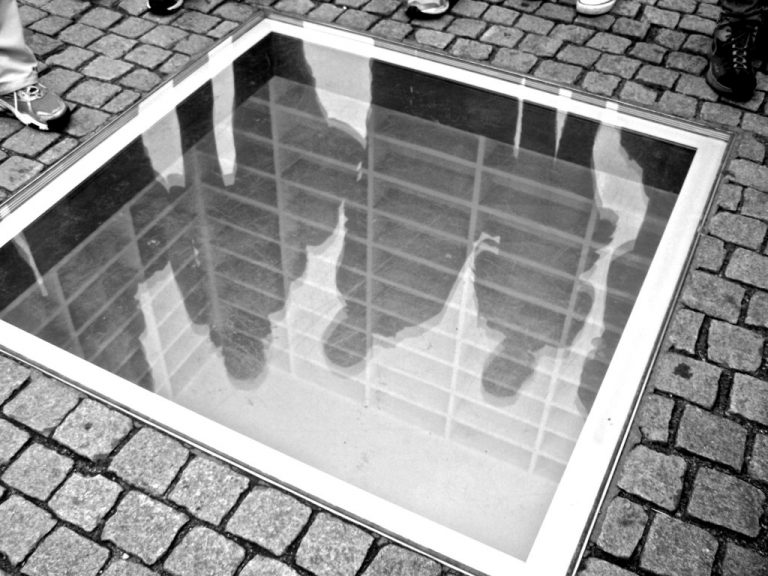 A symbol of education in the city of Berlin, the Bebelplatz Square was chosen on May 10, 1933 by Joseph Goebbels, Minister of Education and Propaganda of the Nazi government, to carry out the infamous autodafé. This sad episode of German history consisted of the burning of German books whose content was contrary to Nazi ideology. Decades later, in 1995, contemporary artist Micha Ullman installed on the same site a significant work, the sad poetry of which recalled a whole disappeared culture - the Empty Library.

Adolf Hitler, who had held power since 1933, had already forced many artists and scientists into exile as their ideas did not please him. This was the case of the German painter Josef Albers who, at the closure of the Bauhaus, went into exile in the United States in 1933. On the night of May 10, 20,000 books were destroyed by fire. Indeed, members of the government and many young students deliberately threw "non-German" books from bookstores and libraries into the chain. Among them, some works were written by Karl Marx, Sigmund Freud or Stefan Zweig - to name only the most famous authors concerned. Pages and pages went up in smoke in the dark night, no longer blackened with ink but with ashes.

If you visit Bebelplatz today you will find on the ground a glass plate less than one meter square: it is the Versunkene Bibliothek, the Empty Library. This installation by the Israeli sculptor Micha Ullman sits as a permanent reminder of the 1933 autodafé and the censorship that Hitler's government engendered. Revealing a sinister and icy universe, the transparent glass plate lets us glimpse at a succession of shelves. These were intended to accommodate the 20,000 lost works and are thus emptied of their content. Furthermore, the library is particularly visible at night, during this time it seems to take on its full meaning.

Micha Ullman: An Artist of Remembrance

Micha Ullman was born in 1939 in Tel-Aviv, Israel. He has chosen to create his art by always looking at and interrogating the past. The remembrance of the traces of history occupies a large place in his work. Indeed, his art feeds on memory; it becomes the memory itself. The bookless library of Berlin acts as a soulless body, testifying to the violence and the ignorance of the Nazi government. Placed in the Berlin square in 1995, the memorial also presents a quote from the romantic poet Heinrich Heine, engraved on the plaque itself: "Where you burn books, you end up burning men" (''Dort, wo man Bücher verbrennt, verbrennt man am Ende auch Menschen''). Through the destruction of a whole series of works, a whole section of culture indeed disappeared during that sinister night.

Here is truly the message that Micha Ullman wants to send us through his art; if culture is wiped out, what will happen to humanity?