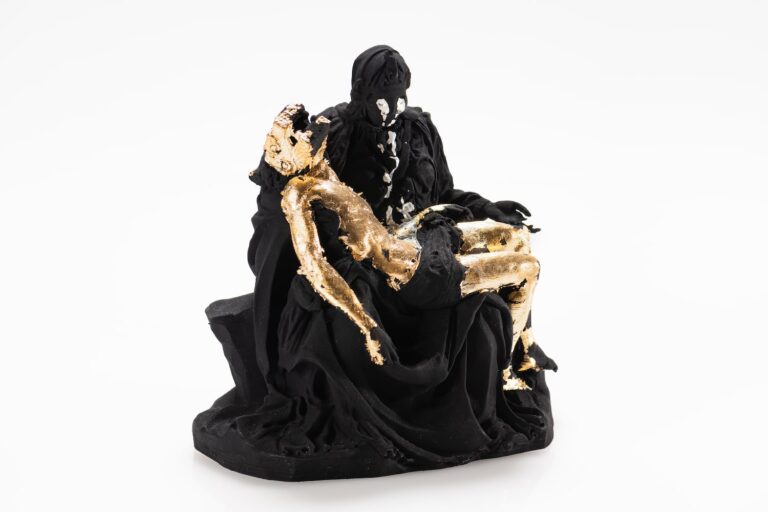 Painting of the Week: Miguel Covarrubias, The Mexican Street Scene

24 local, national, and international artists presented an intersectional show discussing social and racial justice themes relevant to Latin American/Latnix communities for Vida, Muerte, Justicia | Life, Death and Justice in Ogden, Utah. The exhibition contained central themes of COVID-19’s impact on the Latin American population, but also discussed the pains and deaths of migrant workers, honored victims of school shootings, and raised concern for other forms of violence and mistreatments that heavily impact the Latinx/Latin American communities. The show was on display at Ogden Contemporary Arts Center and Weber State University’s Shaw Gallery. You can see the show virtually—available online with a virtual walkthrough on the Ogden Contemporary Arts website.

María del Mar González-González and Jorge Rojas, co-curators of the show, researched and conceptualized an exhibition with artists whose work deals with particular social justice and human rights incidents throughout the 21st century. Rojas says:

We selected multigenerational artists for their impressive professional trajectories and commitment to making art that critically addresses and reflects our times.

One of the many relevant themes explored through the exhibition is the impact of COVID-19 on local communities. As González-González states, “COVID has revealed a lot of the systemic injustices that (our community) has been going through.” According to Salud America!, Latin American peoples make up approximately 18.5% of the United States population, yet currently comprise 26.6% of COVID-19 cases. This statistic reveals the ways that Latinx and Latin American individuals are treated with less veracity compared to white Americans when it comes to healthcare. Rojas gives the statistics: “Nearly 61 million Hispanic or Latin American people currently live in the United States, making it the nation’s largest minority group.” Ogden, Utah, specifically, is approximately 30% Latin American. With that heavy presence, it’s important that locally curated shows like this exist to pay tribute to those who live in this world through a Latin lens.

The Corona Altar by Scherezade Garcia is an installation in the show that honors the Mexican tradition of “papel picado” (punch paper). Visitors were encouraged to bring personal offerings including flowers, photographs, and notes, as well as other items to commemorate those they’ve lost. This piece intersects global trauma and marginalized groups of individuals who have been disproportionately affected by the pandemic. It is a strong representation of the exhibition’s overall intent—to explore the universality of humanity and biases related to life, death and justice in our world today. 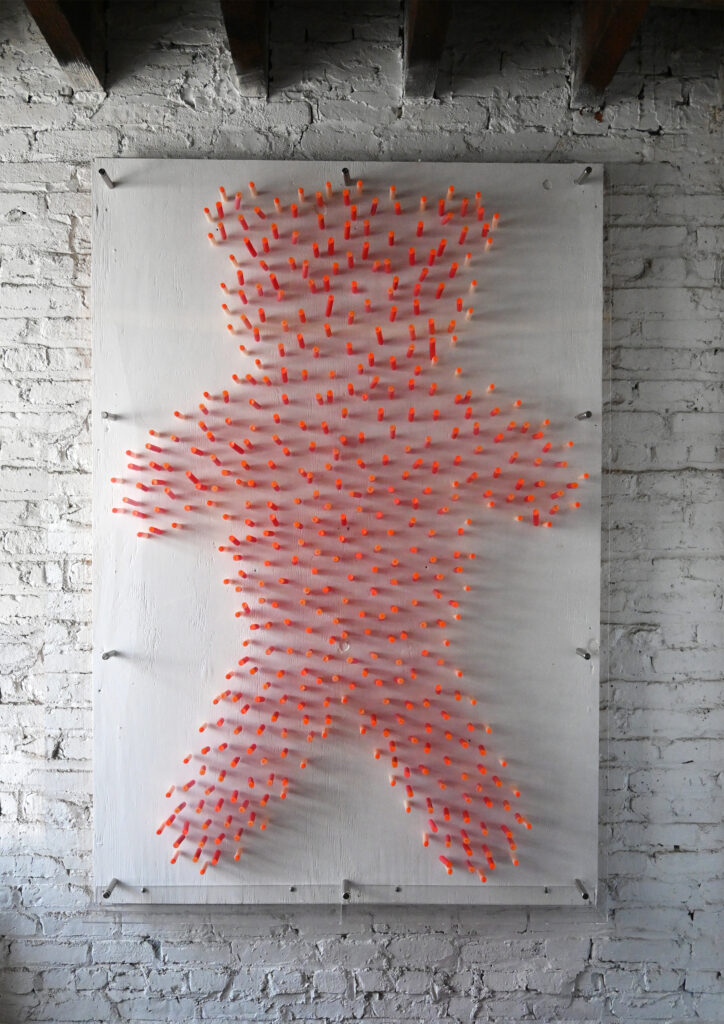 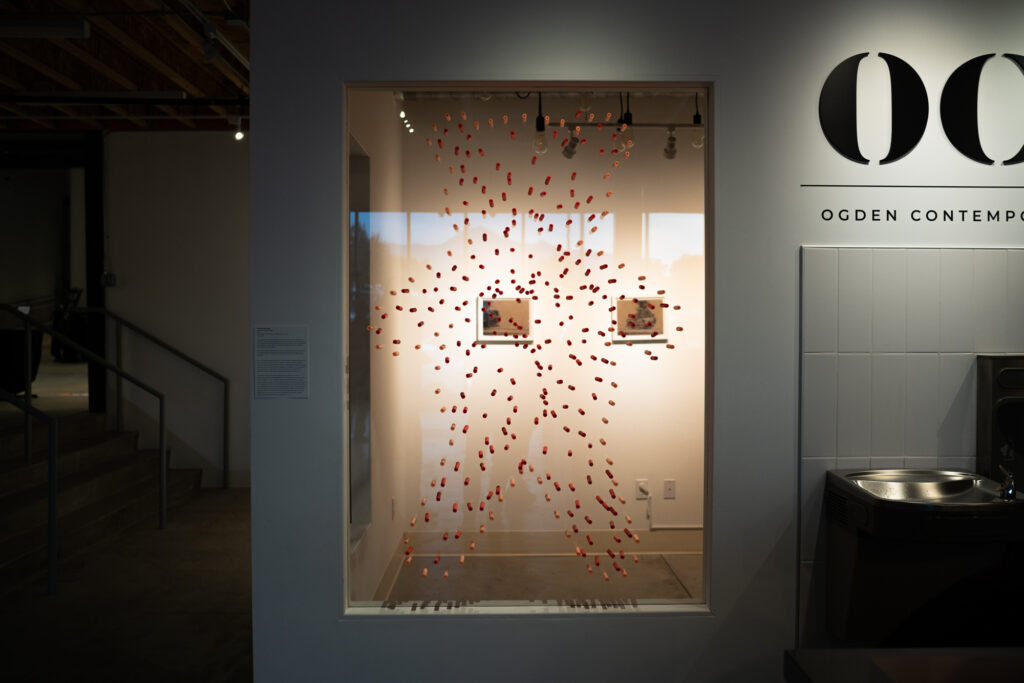 The artist states: “Created in response to the staggering number of school-shootings, America’s Teddy Bear is an installation of a giant bear figure made out of hundreds of foam bullets, fired into a large, clear surface…”

“…Using a military-style toy gun during a performance, I’ve created a familiar and endearing image that is undercut by the realization that each bullet represents a victim.”

Patricia Espinosa’s America’s Teddy Bear is another powerful piece in the show that responds to current events. The artist states:

Created in response to the staggering number of school-shootings, America’s Teddy Bear is an installation of a giant bear figure made out of hundreds of foam bullets, fired into a large, clear surface. Using a military-style toy gun during a performance, I’ve created a familiar and endearing image that is undercut by the realization that each bullet represents a victim.

Her piece appears innocent with foam bullets that form the familiar teddy bear shape, but Espinosa’s performance has a contrasting ominous tone. The loud drill noises reflect what a student might hear during an active school shooting. In alignment with the show’s theme, this piece honors the lives of those lost as the artist writes their names on each bullet.

Eden Buxton received her BFA in Photography from Weber State University and MFA in Film & Media Arts from the University of Utah. She has curated exhibitions throughout the Northern region of Utah, ranging from shows on busses to elevators. Buxton believes in the importance of accessibility in the art realm and has been determined to bring art into the community. Her current position is at Ogden Contemporary Arts as their Marketing & Fundraising Coordinator.

Some artists are gateways to art and its history; creators who make an authentic and one-of-a-kind work that is referenced over and over. Fernando...

In Suzanne Valadon: Model, Painter, Rebel, the Barnes Foundation in Philadelphia, PA, shows how Valadon transitioned from an in-demand model to a...

The Titian’s Vision of Women. Beauty–Love–Poetry exhibition is a major highlight of Kunsthistorisches Museum in Vienna that runs from 5...

Until Sunday, January 30th, 2022, the Georgia Museum of Art is exhibiting some of the most influential Native American printmakers at work today.