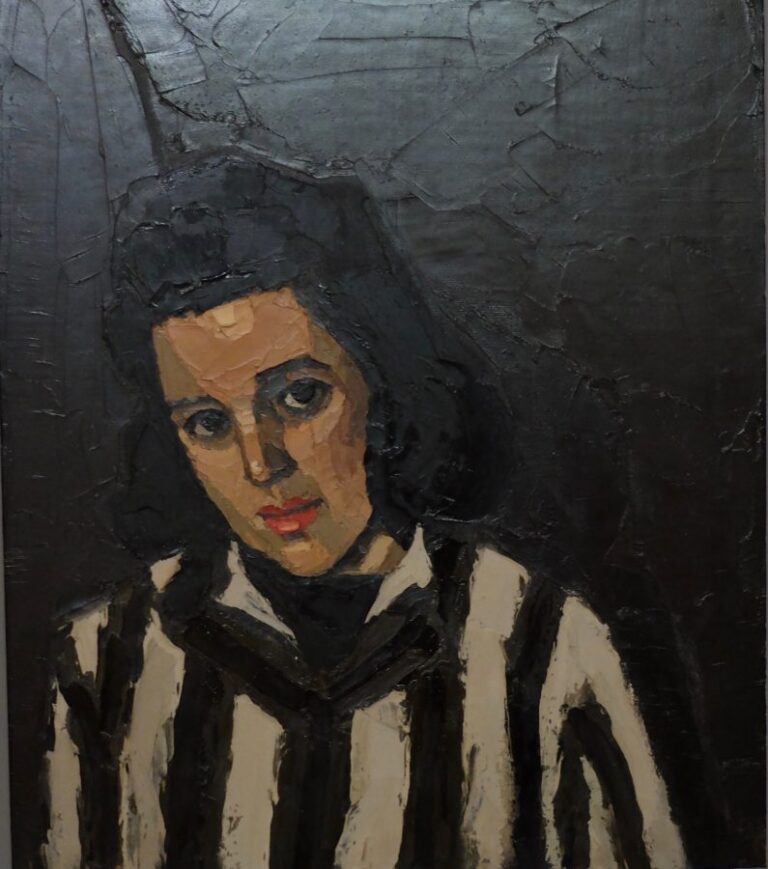 Sir Kyffin Williams (1918-2006) is widely regarded as the defining artist of Wales during the 20th century. His paintings have become part of the visual iconography of the country.

He is best known for his thick impasto oil paintings of rugged Welsh landscapes, the predominant colours of black, slate-grey, olive-green, ochre and umber, applied in thick, bold swathes with a palette knife.

However, as well as landscapes, he produced hundreds of portraits over his career, ranging from eminent Welsh figures to small, solitary, stoic humble figures set within his trademark landscapes. Here we take a look at Kyffin’s women.

Kyffin (rhymes with ‘puffin’) was born into an old landed family in Anglesey, Wales. His mother, Essyllt, had forbidden the use of her Welsh mother-tongue at home. She was an inhibited and anxious parent. He said: “I was brought up with a vision of a totally apprehensive mother, fear written all over her face.” Their relationship was distant and seemed to involve little or no physical contact. At birth he was sent to a local farmers wife to be nursed. In stark contrast, Kyffin said that his brother was worshipped by their mother and given the best of everything. Sadly, Kyffin reports that the brother, although worshipped, never received any maternal affection. Despite this traumatic family dynamic, it seems the brothers loved each other. Kyffin said: “He was awfully nice to me, terribly nice.”

In later life Kyffin spoke generously about his mother: “I was terribly sorry for her. I mean she really was an extremely good person who had got lost, totally lost in the sort of strange miasma of society and convention.”

In his youth Kyffin developed polio and then epilepsy. He was in the Army when he was officially diagnosed. Apparently the doctor said: “We have decided that as you are in fact abnormal, you should take up art.” At first this didn’t appeal, but he ended up at Slade School of Art in London. He claimed he only got in because everyone else was away in the war.

Kyffin described his health problems as “my greatest misfortune”. This also affected his relationships with women as he believed that emotional excitement exacerbated his condition.

“When I was young I couldn’t get excited, I couldn’t go to dances, I couldn’t do anything like that. And so in a way the only thing I did have was my art.”

Although he did have some relationships, he never married or had children. In an interview with the BBC Kyffin specifically mentioned sex: “Well I think one naturally does know all about it, but I had to be a total loner really, any excitement would bring on an attack, do you see, and this sort of thing made life extremely difficult.”

Kyffin took a while to find his artistic calling. Whilst attending Shrewsbury school as a boy, one senior master said: “Never in my whole experience have I met a boy with less ability.” Another master said: “This boy has no power of lucid thought.” And his house master said: “It is a tragedy, he is the despair of all who teach him.“ His initial work at art school was not considered worthy. A life class teacher famously said to him: “Oh Williams, why do you make your nudes look like oak trees? You can’t draw, you had better see if you can paint.”

At this moment he found his great love. “Well it is rather extraordinary. I found there was something in oil paint. It was the sensuousness of the oil paint, the richness of the oil paint; from the moment I started to use oil paint I used it thickly”. Art school prohibited the use of a palette knife, so he worked with a brush. Later he threw such convention aside and worked almost exclusively with the knife.

When speaking of his portraits he was always very modest. Although he clearly paints with emotion, he always denied that he was able to get inside the mind of the sitter. He said of his sitters that it was their sadness and their angst that appealed to him. He called it “a search for truth.” One of his exhibitions was visited by a psychologist, neurologist and a brain surgeon and they said that Kyffin’s portraits were an incredible interpretation of the psyche.

Kyffin said that some women, in particular, were “very paintable. ”He explained: “very good-looking women, are not paintable because everything falls in the right place and they look like statues of Greek women or something like that.” He felt that he had to find that special something in a woman that was unique to her.

Kyffin admitted that not having a relationship was his greatest regret. He said:

“the only thing I’ve ever wanted in my life was to get married, and somehow it turned out to be almost totally impossible because of epilepsy, and painting became a substitute. It’s very odd really.”

Perhaps we can view his portraits of women through this lens – a complex and vulnerable man in love with life and with womankind, but always held at arm’s length. The celebrated artist, surrounded by friends and admirers, but in fact, through a series of tragic life circumstances, a man starved of personal intimacy from birth all the way through to his death aged 88.