Yesterday we were commemorating Remembrance Day. Also known as Armistice Day, it marks the day when World War One ended, at 11am on the 11th day of the 11th month, back in 1918. On this occasion, yesterday we presented the artists who fought in this horrible war (check out the article here). Today we want to recall the atrocities of the war with this shocking picture, created in 1919 by John Singer Sargent.

John Singer Sargent, Gassed, 1919, Imperial War Museum, London[/caption] If you saw this painting hanging on Imperial War Museum's wall, you would have immediately noted its tremendous size - 231 cm to 611 cm. Then you might have probably noticed it's topic. Gassed depicts the aftermath of a mustard gas attack, with a line of wounded, blind soldiers walking towards a dressing station. The painting provides a powerful testimony of the effects of chemical weapons. Mustard gas is a persistent vesicant gas, with the effects that become apparent only several hours after exposure. It attacks the skin, eyes and mucous membranes, causing large skin blisters, blindness, choking and vomiting. Death can occur within two days, but suffering may be prolonged over several weeks. Here we have the horrible scene of management of the gas victims, their relative lack of protective clothing, the impact and extent of the gas attack as well as its routine nature – show must go on regardless the victims. Sargent was commissioned by the British War Memorials Committee to document the war and create a painting planned for the Hall of Remembrance. The scale of the work was inspired by Uccello's triptych The Battle of San Romano. The thing is, that The Battle of San Romano is 182 to 320 cm, so Sargent's work t is two times bigger. [caption id="attachment_2311" align="aligncenter" width="620"] 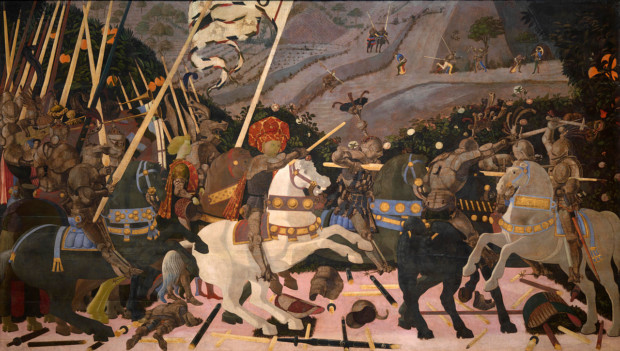 Paolo Uccello, Niccolò Mauruzi da Tolentino at the Battle of San Romano, probably c. 1438–1440, National Gallery, London.[/caption] Sargent visited the Western Front in July 1918 near Arras and then near Ypres. As an American painter, he was asked to create a work embodying Anglo-American co-operation, but he had difficulties to find a good situation. As he wrote in a letter to his friend:

"The Ministry of Information expects an epic – and how can one do an epic without masses of men? Excepting at night I have only seen three fine subjects with masses of men – one a harrowing sight, a field full of gassed and blindfolded men – another a train of trucks packed with "chair à cannon" – and another frequent sight a big road encumbered with troops and traffic, I daresay the latter, combining English and Americans, is the best thing to do, if it can be prevented from looking like going to the Derby."

The situation changed when Sargent witnessed an aftermath of a German barrage in which mustard gas had been used during the Second Battle of Arras of 1918. The War Memorials Committee agreed to change the subject of the commission, and the painting was made at Sargent's studio in Fulham in 1918-9. [caption id="attachment_2312" align="aligncenter" width="620"] 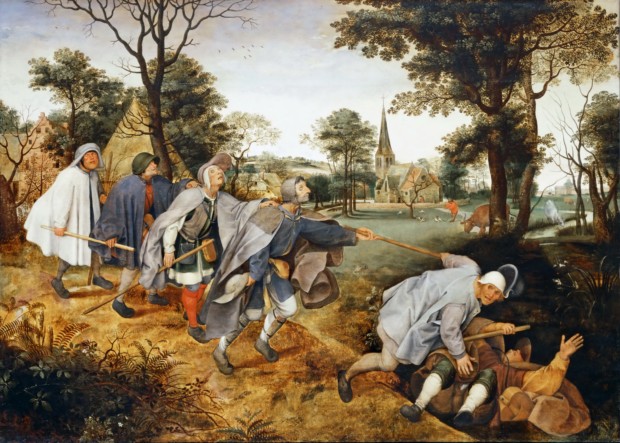 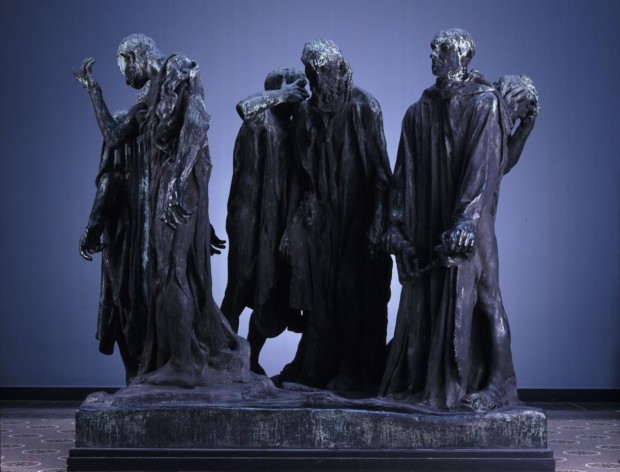 Auguste Rodin, Burghers of Calais, 1884, Rodin Museum, Paris[/caption] The painting was completed in March 1919. It wasn't liked by everyone – some considered it too heroic, like Virginia Woolf, but Winston Churchill praised its "brilliant genius and painful significance". I'm not sure if it should be described as "too heroic" - it shows a group of broken and helpless men that occupy the entire foreground of the painting, and continues behind the stepping men, makes that claim even less credible. This is the depiction of people of no future, who devoted everything to fight in a war that changed the modern world.