An Interview with Emily Thomas 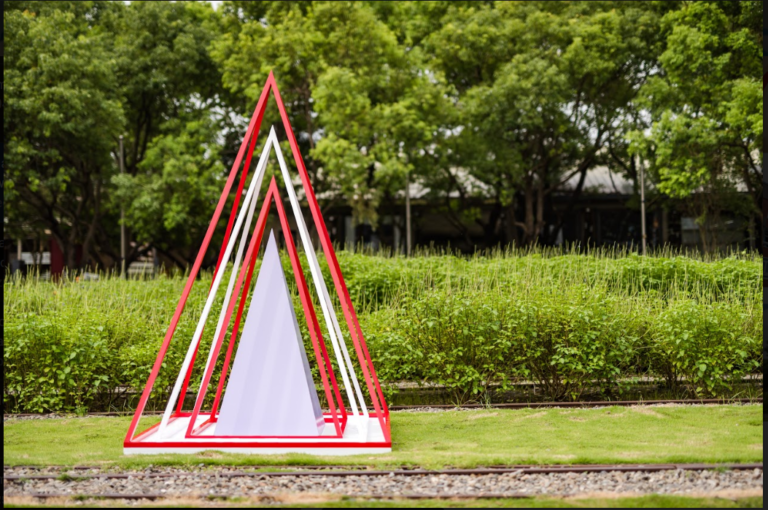 Emily Thomas is a 24 year old, British, emerging artist. At first glance, her bright and vibrant sculptural work is distinctive and abstract. In a previous article, Exploring Place with Emily Thomas, we looked at Thomas’ artworks from Tainan, Berlin, and London. In the following interview we dive into the inspirations behind her artistic practice.

For me, it is not about where my artwork ends up or on what scale. I enjoy travelling and hope that I am able to visit as many countries as possible.

How would you describe your artistic practice and how do you see it developing?

My current practice is an exploration of sense of place, portrayed initially through photography and collage, and finally demonstrated through the mediums of sculpture, painting, architecture and object. This is continually developing and changing. In the future I would like to work on a larger scale, with a more concentrated focus on representing art through architecture rather than representing architecture through art.

You grew up in a small village in Somerset with a population of 300 people, yet your sculptures focus on urban environments. How do you think growing up in Somerset influences your understanding of what creates a sense of place?

Most of the houses across Somerset are stone built and the Churches and Cathedrals are very beautiful in their ‘Harry Potter like’ character.​ Each village and town has its own signature sense of place, but I think this is visually less obvious within cities.

The town of Glastonbury comes to mind as having the most unique sense of place in Somerset. It is a spiritual town that attracts people with New Age and Neopagan beliefs. This is mainly due to the myths and legends surrounding Glastonbury Tor, concerning Joseph of Arimathea, the Holy Grail and King Arthur.

I think that my childhood memories of Somerset heighten my appreciation of how different architectural styles and urban infrastructures can create a sense of place. Cities are so huge and impersonal in comparison to the rural village.

I lived in London for four years while studying. I found myself analyzing the architecture to see what I could learn about the history, culture and social elements of different areas within the city. After years of experimenting with different conceptual interests and mediums, I established a process of exploring new places and creating sculptures.

Architecture is obviously at the core of the work you produce. Do you have architectural styles that you find you’re drawn to?

The Bauhaus movement in particular has a strong influence on my practice. Aesthetics and function are of equal importance in the Bauhaus design processes. This means the structural form, materiality and color of Bauhaus architecture is a key indicator of place identity and reflection of the needs of the time.

Read about the research behind Hufeisen (Emily Thomas 2019) and Bruno Taut’s ‘Hufeisensiedlung’ (1928, Neukölln, Berlin) – an example of Bauhaus architecture in Berlin – here.

Residencies are obviously essential to fuel your exploration of “place” within your artwork. How much control do you have over where your art takes you?

There are continuous open calls for residencies all over the world. So, in that sense, I can apply to go anywhere. However, only some residencies are fully-funded and I sometimes have to apply for funding externally. This is challenging and can be restricting.

After my degree show it was key for me to discover a new city and experience a contrasting sense of place. After completing residencies at Glogauair Berlin and Soulangh Cultural Park Taiwan in 2019, I won an exchange award (2020). This was f​or a residency at ​La Escocesa Barcelona from La Memoria Artistica Chema Alvargonzalez. Due to the pandemic, my residency was cut short. I will hopefully return to Barcelona at the end of this year to finish my project.

In our other article we discuss the research behind your Hufeisen sculpture. What research were you conducting in Barcelona, prior to the Covid-19 lockdown?

I spent most of my time working in the post-industrial neighborhood of El Poblenou. I lived and worked across three former factories that have now been converted into creative center. These are La Escocesa, Hangar, and Fabra i Coats. Many of the former factories in El Poblenou were destroyed in the lead up to the Olympic Games in 1992. They were then replaced by the Olympic Village and Port.

The destruction of the former factories forgets the heritage of the town and the sacrifice of the workers. As a response the urban initiative ‘[email protected]‘ decided to keep the chimneys of the factories that had not yet been demolished and preserve them as a memorial and symbol of respect for the workers of the industrial revolution. This is ironic as now the chimneys have become a fashion statement: the new companies moving into the area hanker after a chimney next to their offices to enhance their image, defeating the point of their original symbolic purpose.

This has resulted in cruel gentrification within the area. This drives away the original working families. This context led me to develop my research of the industrial revolution and its influence on architectural evolution.

Aside from taking inspiration from post-industrial architecture what other era of art history have an influence on your process?

Cubism has a strong influence on my process. Different viewpoints and objects come together to create an alternate reality. Subjects are simplified into geometric forms that are able to keep the projected atmosphere of a place or object alive.

My artwork evolves from my direct experience of a particular place. First I document with photography from different angles. I then create collages from my images. This allows me to consider the aesthetics of the particular place from multiple different perspectives. It is therefore not surprising that the collages can seem cubist in their style. This process allows me to break down my images into geometric structures. I can then visualize the potential of my images as three-dimensional abstract forms.

I think the artist that has had the most influence on my practice is Dominic Beattie. Beattie opened my mind to the possibilities of painting and the flexibility of medium boundaries. This originally encouraged me to experiment with three-dimensional painting and sculpture from my photography and collages.

Where are you planning on going next?

My previous residencies have lasted a period of just three months. Therefore I have not been able to research as deeply as I would like. I now feel a need to stay in one place and am focusing my attention on the interests I developed while in Berlin.

I have received a place at ZK/U Berlin (Centre for Art and Urbanistics). Here I hope to realize a project about the growth of Berlin Modernist housing estates in 2021.