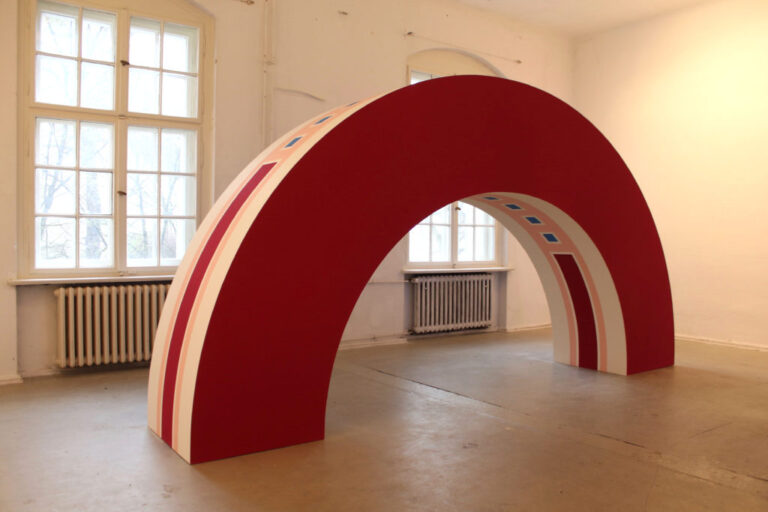 Emily Thomas is a 24 years old, British emerging artist. Her bright and vibrant sculptural work is distinctive and abstract at first glance. However, it is also richly embedded in a sense of place. In this article, we will explore the places of Tainan, Berlin, and London.

I think that art can be anything...I am personally more interested in artwork that is conceptually intriguing and tells a story through its aesthetics.

Emily graduated with a Fine Art degree from Chelsea College of Arts in 2018. Since then she has been touring the world in a series of residencies.

As a mixed-media artist, Emily paints, sculpts, constructs and photographs. Her work, which is often somewhere between sculpture and architecture, challenges our human desire to categorise form and function.

Emily's creative process begins primarily with walking and looking. She will explore her subject, almost always a place, thematically through photography and then collage.

This mode of research allows her to make artworks that absorb the architecture and history of their place of inception. Through their materials and final form the artworks re-imagine the key characteristics that make up a sense of place.

Tainan is a city in southern Taiwan and the oldest city on the whole island. The Dutch East India Company established the city in the early '1600s, but archaeological excavations suggest that the region has been inhabited for at least 20,000 years. Following the Dutch, the area was subject to the Ming dynasty, and after that the Qing, then Japanese rule. Today, Tainan is claimed as one of the Taiwanese cultural capitals and boasts a rich local culture.

During her residency at the Soulangh Cultural Park in the Jiali District, Emily reflected on the broad array of architectural influence in Tainan and wider Taiwan.

The exhibition uncovers how architecture has previously served and will continue to serve as a literal and metaphorical Shapeshifter of place identity through time.

The colour green symbolises these rural communities and their respect for the environment. The title refers to the colonising newcomers to the island at the time as Snakes in the Grass, who attempted to destroy indigenous cultures.

In The Leading Edge, Emily reflects on modern architecture through her minimalist approach. The combination of bright white paint and the two-way mirror is symbolic. It suggests the false transparency of the capitalist system, which often creates a power imbalance.

Contrasting with the representation of the urban parts of Tainan is Emily's depiction of the more local housing and lifestyle in Jiali. In Everything in the Garden is Rosy the plant pots are key. They represent both the importance of gardening for well-being as well as the space-shortage that make gardens a luxury.

From a history of Taiwan to an exploration of the process of urbanism. Let's move from Tainan to Berlin and Emily's Glougair Residency.

The artwork from this Berlin residency explores not only the lasting legacy of Bauhaus, but also questions gentrification and current housing tensions.

Perhaps orientating contemporary architecture research and design around similar ideologies and infrastructures, could improve the development of different communities and societies within the city.

A place in Britz (Neukölln)

Within the Britz neighborhood of Berlin there are two contrasting architectures. This is the result of two different companies contracted in the '1920s to build much-needed new housing. The industrial revolution had created a great need for social housing and both companies rose to the challenge.

Unlike the DEGEWO company, who conformed to German traditions of pitched roofs and pale coloured blocks, the GEHAG company - led by Bruno Taut - innovated new expressions. While the latter version of social housing express content with the status quo, the former use their architecture to express confidence in the future. Six of these housing estates were listed as UNESCO world heritage sites in 2008.

Hufeisen is named after Taut’s Hufeisensiedlung (1925-1930) in Neukölln. It is Emily's largest work to date. The shape references the imaginative horse-shoe structure of Taut's design. Such innovations in Taut's architecture symbolize a modernist hope for the future of Berlin.

Colour has the ability to encourage conceptual interpretation and assert visual impact.

The artwork successfully looks back at Bauhaus (read about the women of Bauhaus here). However it also engages with the current state of the urban environment.

Ultimately Hufeisen is able to capture the essence of the area and acknowledge that Berlin is still a growing city.

Our final destination is London. In this city Emily chose Hackney as the starting site for her 2018 series. The idea to start in Hackney came about after reading an article about Jenny Lewis’ ‘Hackney Studio Project’.

Lewis photographed artists in their Hackney studios. Since she started the project many of these artists were forced to leave the area due to gentrification and rising costs. The Guardian interviewed some of these artists to learn about their experiences. The title ‘Hackney, I love you. I lost you.’ was quoted in the article from accessories designer Fred Butler. This seemed like a fitting title for my work, as the imagery created evokes a ghostly atmosphere of the creative community.

I Used to be Color Blind evokes Soho. It's title refers to a jazz tune sang by Ella Fitzgerald who performed regularly at Soho’s Ronnie Scotts Jazz Club. The work uses colour and pattern to create a visual impact akin to the hustle and bustle of the London's cultural centre.

Dinner is served for some of the most famous and important women in history. Goddesses, saints, artists, poets, writers, queens, wives, mothers, and...