Did You Know? Haarlem in the Dutch Golden Age 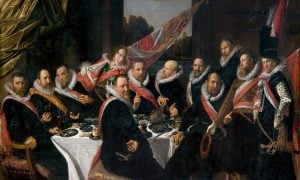 The city of Haarlem in the Netherlands was one of the flourishing art centers of the 16th and 17th centuries. Today, you can walk the streets of the city and see that not much has changed. Architecturally, the space is filled with reminders of a point in history when artists came up with new ideas and created new styles. Although Haarlem has a long history, dating back to before the middle ages, there was a specific time when the stars aligned and the city flourished and that period was known as the Dutch Golden Age.

4 Surprising Facts about Haarlem in the Dutch Golden Age

Between 1575 and 1675, the following circumstances, turned cities like Haarlem into artistic hubs. Firstly, artists both male and to a lesser extent female were able to prosper in Haarlem. Secondly, the church didn’t control artistic subject matters, unlike in the Southern part of the Dutch Republic or in Italy. Thirdly, there was the emergence of genre painting which put the Dutch masters at the forefront of innovation. And, fourthly, the city’s open market created conditions whereby artists could flourish and this led to the creation of some of the world’s greatest art.

The number of major contributors to early Netherlandish art who were either born or active in Haarlem is surprising indeed.

Female art masters were not as common as their male counterparts. Many steps were required to gain the official title of “master” artist; and it was more difficult, nay impossible, to obtain master status as a female due to society’s standards for women. However, the Haarlem school did produce female masters.

Judith Leyster was one of the first women to achieve master status in her profession, around the same time as Sara van Baalbergen. Across the whole region there were quite a few female artists who managed to obtain the title of Master, and were very active in the art world.

Artists like Maria de Grebber, whose father owned and operated a workshop for artists – which including Leyster. It may have been easier for de Grebbe, as members of her family already worked in the industry. In contrast, Leyster had to work her way into art because her family’s profession was in brewing.

2. Genre painting in Haarlem in the Dutch Golden Age took over as the main source of inspiration

Because the Northern part of the Dutch Republic did not adhere to the religious practices of their southern neighbors, there was an opportunity to produce a vast array of art that counter balanced that of the Catholic Church. The presence of religious diversity combined with the booming economy, created a new demand for art. Because of this, religious scenes were replaced by genre scenes; including, but not limited to, still lifes, domestic interiors, moralistic scenes, and scenes of everyday life in the streets and markets of Holland. Below is a graph from the National Gallery of Art’s Painting in the Dutch Golden Age:

One particular genre specific to Haarlem was Haerlempjes. The name denotes the very specific genre of painting the landscapes of Haarlem.

3. Haarlem is home to the Frans Hals Museum

The oldest art museum in Holland is located in Haarlem. It is named after the Dutch artist, Frans Hals (ca. 1582-1666), who spent most of his life and career in the city of Haarlem. The Spanish Netherlands-born Hals is one of the most celebrated portraitists of the Dutch Golden Age, second only to Rembrandt and Vermeer.

The museum has created an immersive learning experience on the man behind the paintings, known as The Hals Phenomenon, giving visitors an opportunity to learn about him before exploring his actual work in the gallery.

4. St. Luke’s Guild in Haarlem played an important role in the formation of rules and regulations for artists

Guilds helped to build the socioeconomic world of Europe in the 11th to 16th centuries. Though their purpose changed over time, guilds served as an “association of craftsmen or merchants formed for mutual aid and protection and for the furtherance of their professional interests.”

Concerning Haarlem, the Guild of St. Luke consisted of artists of various practices; the most common guild for artists, it was named for St. Luke, the patron saint of artists, surgeons, and doctors. However, in a later reformation of the Haarlem guild’s charter, painters stepped up to ensure that they would be given a higher place among their creative peers:

[O]ur first and greatest concern is the renewal of the ancient luster of the art of painting, which was always held in the highest esteem by the olden kings and princes…[I]n the first place, this guild of St. Luke consists of painters, the largest and most important of its constituent groups.

Taverne stated that “article after article reflects a bias in favor of the painter and his art.” Even if they sat higher on the intended pyramid of artists in the guild, the painters still experienced restrictions on what they could and couldn’t do.

A name that continuously popped up in researching the Guild of St. Luke in Haarlem, as well as the reformation of the group in the 16th century, was de Bray; both Salomon and his son, Jan. The surviving archives point to the fact that the Haarlem guild archives consisted of documents made by Salomon de Bray, or under his supervision. To that point, according to E. Taverne:

Bray turned the traditional guild into a smoothly functioning trade union. [T]hroughgoing study of the surviving archives has brought to light the reforms in the charter of 1631. We now see them to be the direct expression of a distinctly new conception of the place of the painter and his work within the guild.

E.Taverne, Salomon de Bray and the Organization of the Haarlem Gild of St. Luke in 1631 p. 50.

In the art world, it is commonly agreed upon that still life painting as a genre rose in the Northern and Spanish Netherlands in the last quarter of...

Chinese culture has always been an object of European fascination – in art history, we see it in paintings, ornaments, architecture, fashion, and...