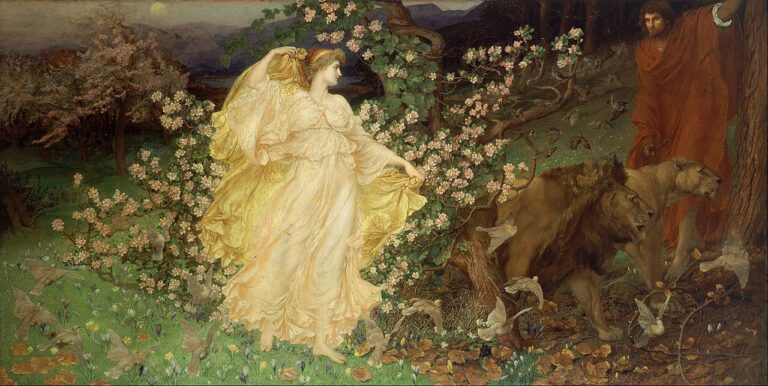 Looking for an inspiration on how to furnish your flat, how to dress, what to read and where to go in order to make your life more aesthetic? Look no further, here comes a guide to Aestheticism, a 19th century movement which disrupted the Victorian world by challenging its traditional values with a more sensual, more personal, more profound approach to living. 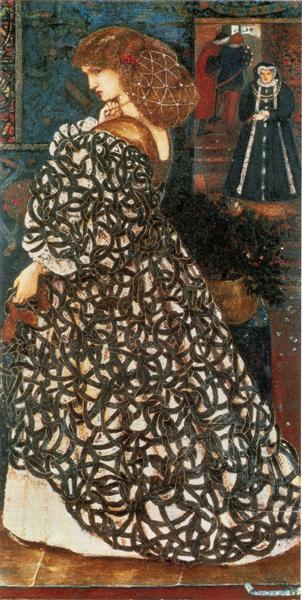 Edward Burne-Jones, Sidonia von Bork, 1860, Tate Britain, London[/caption] There was no unified or organised group of people with whom we could associate the movement which took place in Britain (but largely influenced by French literature), maybe because it appeared not only in visual arts but also in literature. Some critics trace the origins of the movement to the Pre-Raphaelites who were active from the mid-19th century and whose emphasis on sensual beauty was undoubtedly influential for the development of artistic style. 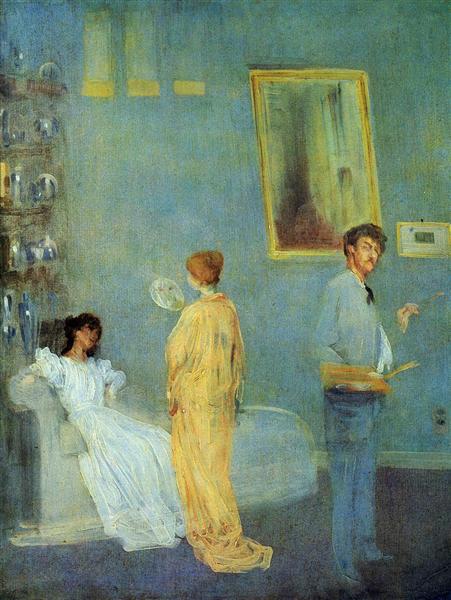 James McNeill Whistler, Whistler in his studio, c.1865, Art Institute of Chicago, Chicago, IL[/caption] For the Aesthetic Movement art was not confined to painting, sculpture, and architecture, but it was to encompass every single part of everyday life. Therefore, it embraced decorative arts like ceramics, metalwork, fashion, furniture, and interior design (and this is why images of interiors in white/beige furnished with minimalist but fashionable and expensive miscellaneous objects are not an invention of Instagram, nothing is original).

No to consumption- only craftsmanship 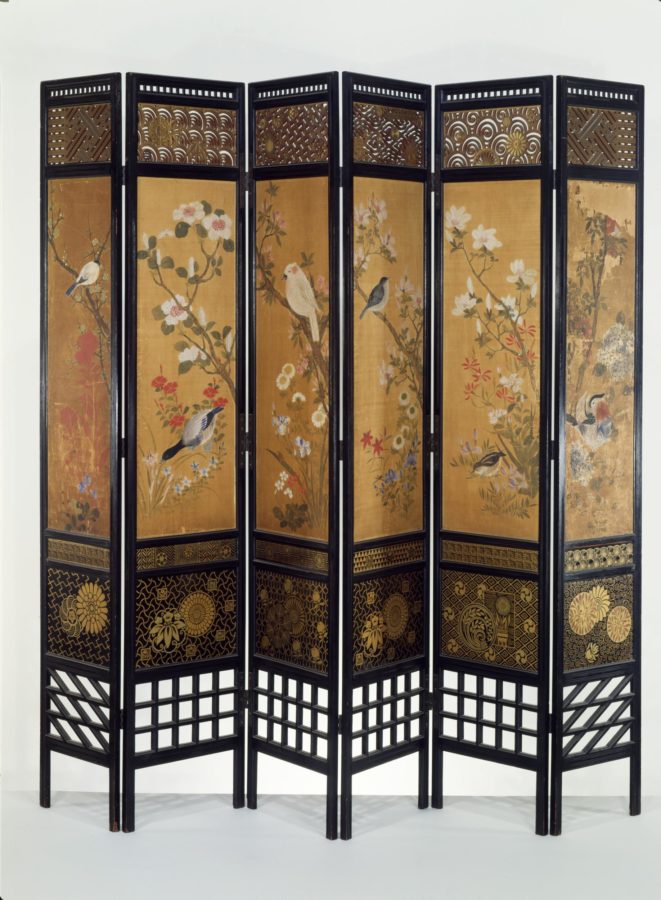 Designed by William Eden Nesfield, Screen, 1867, © Victoria and Albert Museum, London[/caption] They opposed industrial production (particularly the mass produced and hence cheap and repetitive designs of consumer products) and distanced themselves from the Victorian preference for fussy decor abundant in curvaceous forms and detail. An aesthetic house was painted in subdued colors or had wallpapers in geometric designs, while furniture was characterized by simplified linear forms. The primary sources of inspiration were Pre-Raphaelite paintings and British medieval art, as well as, you guessed it, Japanese motifs.

John Atkinson Grimshaw, Day Dreams, 1877, Private collection[/caption] Poetry and prose were fundamental to the development of Aestheticism. Two Frenchemen Charles Baudelaire and Théophile Gautier argued that poetry should not have anything to do with didacticism. The English poet Charles A. Swinburne agreed with them and said that beautiful poetic form and ‘perfect workmanship’ made any subject admirable (and so he wrote about violence and sexual perversy, which you can imagine was quite shocking to poor pure Victorians). Other writers, like Vernon Lee or Oscar Wilde, began writing essays about art, sometimes condemned as ‘purple prose’ (i.e. overly elaborate and ornate writing, often densely allusive and metaphoric). Especially Wilde’s writing threw off Victorians, who liked serious and clear presentation of argument, by relishing instead paradox and playfulness and arguing that life imitates art rather than the other way round (and he put his words in practice, always impeccably dressed and living in a way to make his life a work of art). 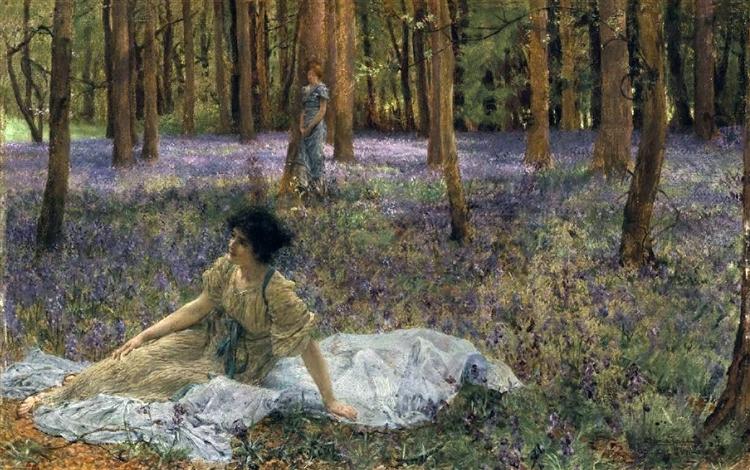 Sir Lawrence Alma-Tadema, Bluebells, 1899, Private collection[/caption] Victorians believed in the social function of art which was to educate and edify. Moreover, many artists believed to have been granted their talent by God/divinity/universe in order to improve the society, they felt they had a mission to fulfil. Aestheticism, instead, was on the opposite side of the spectrum: its famous motto ‘art for art’s sake’ meant reinforcing the sensual qualities of art and the sheer pleasure they provide. Its opponents argued that Aestheticism was all about hedonism and useless pretty things whose only function was to be pretty, a malicious simplification, which led to satirizing the movement in the press. The magazine Punch attacked figures like James Abbott McNeill Whistler, Oscar Wilde, or  the poet Jellaby Postlethwaite, who had affinities with Wilde, and who in one famous cartoon goes to lunch but instead of ordering food, he prefers to contemplate beauty of a lily.

So how to be an Aestheticist? 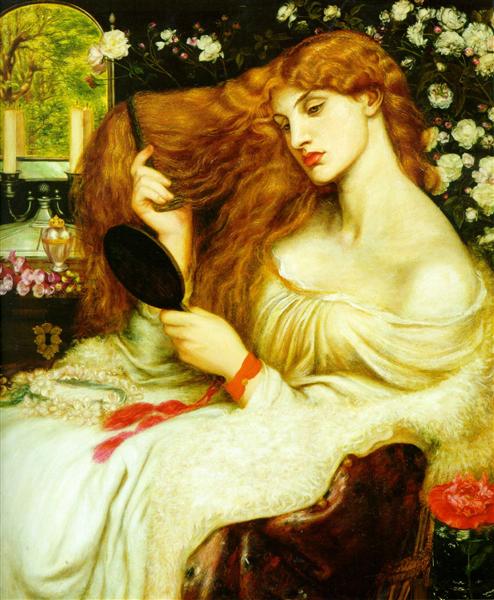 Dante Gabriel Rossetti, Lady Lilith, 1868, Delaware Art Museum, Wilmington, DE[/caption] If you want to become one of them, here come summarized life-changing rules: 1. Read a lot of French poetry, ideally it should be elaborate and formalist. The longer the better, so no haiku... 2. ... but Japanese design and fashion are most welcome! Wearing an original kimono instead of a bathrobe, or putting a screen in your room to fence yourself from your un-Aesthetic roommate/younger sibling/spouse would be perfect! 3. No more shopping in malls and chains, from now on you should buy from little family shops and manufactures, even if that means 10 euros for a soap... Well, living Aestheticly means sacrifice. 4. Slow down and start appreciating the natural world around you, but don't forget to eat!