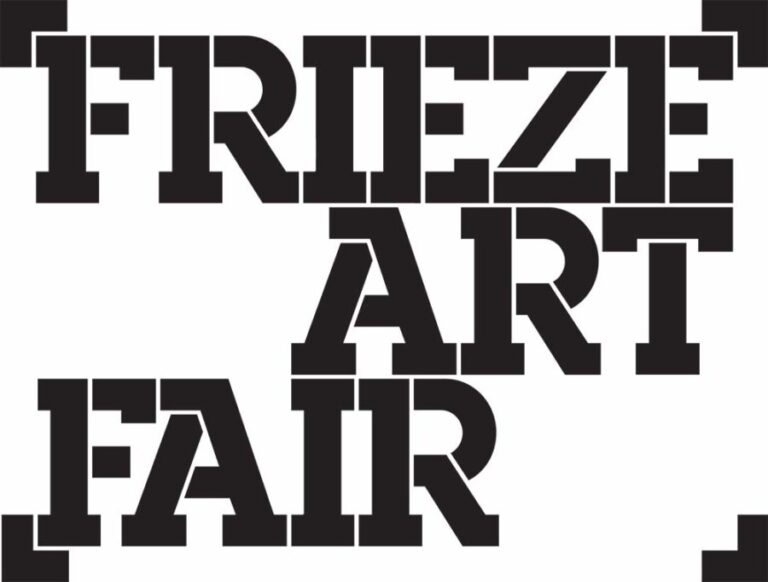 Frieze 2019 surely had its share of new, quirky works of art, but many of the works on view were in dialogue with the artists and artistic practices of the past. From the influence of Picasso to the infusion of Iberian ceramic ware techniques, contemporary artists are continuing to honor art’s past while creating new and innovative compositions. Though Frieze New York has come to a close, Frieze 2019 will be making its European debut in London from October 3rd to 6th.

Immediately, I was drawn to the thick lines of the figures and the bright color palettes of each of these compositions presented by Loevenbruck Gallery of Paris. I initially thought these were compositions by Picasso since he is famous for creating vivid compositions of figures composed of a variety of lines and shapes. However, these works were painted by the hands of a Haitian artist: Roland Dorcély. Like Picasso, Dorcély left his homeland and moved to Paris. Though it has been suggested that the vivid, bold nature of these compositions were inspired by the tropical environment of Dorcély’s native Haiti, Picasso’s influence surely came into play in the creation of these paintings. The sexual undertones of the woman lying flat against a surface in the nude and the curved lines that delineate the bodies are evocative of the Spanish prostitutes found in Picasso’s composition: Les Demoiselles D’Avignon. Similarly, the women of Les Demoiselles D’Avignon are sexualized through their poses and composed of abstract shapes and lines. Dorcély seems to have revived the geometric, vibrant nature of Picasso’s compositions by simplifying the nature of the figures by depriving them of facial details.

A few booths down from the works of Roland Dorcély were a collection of paintings that resembled the works of the Belgian Surrealist, René Magritte. Magritte was famous for hiding the facial identity of his figures – the most famous of these works: The Son of Man (1964) – and now a young Polish artist has created several compositions that seemed to have been influenced by Magritte’s concept of masking the subject’s identity. Presented by Lokal_30 Gallery of Warsaw, Poland, Ewa Juszkiewicz has established a reputation for creating highly naturalized portraits that are evocative of traditional, aristocratic, European portraiture while simultaneously challenging the conventions of how women are portrayed in the genre of traditional European portraiture. By masking the identity of the woman, Juszkiewicz draws the focus of her portraits to the figure, rather than the beauty of her face.

With its booming art market, the art galleries of East Asia truly delivered works of art that showcase the exemplary talent of contemporary artists. Out of all the works of art presented by the galleries of East Asia, this re-interpretation of one of Van Gogh‘s portraits that was presented by Tang Contemporary of Beijing, Hong Kong, and Bangkok, definitely took the prize as being the best. Naturally, this large portrait by the Chinese artist Zhao Zhao reminded me of Van Gogh’s portraits of Joseph Roulin, one of Van Gogh’s closest friends while he lived in Arles, France. The resemblance between Van Gogh’s portraits and Zhao Zhao’s rendition of Van Gogh’s depictions of Joseph Roulin are uncanny. However, Roulin’s face seems to have been defaced by sprays of graffiti paint. Is Zhao Zhao perhaps rejecting the artistry of Van Gogh, or is the defamation of a work by Van Gogh a symbol of rejecting the art of the past by re-interpreting this composition of the Post-Impressionist Period?

The sculptures on view at Frieze this year are also worth noting, and, of course, have that kitsch appeal that contemporary art takes pride in nowadays. Los Angeles-based artist Eduardo Sarabia’s ceramic vase that was presented by Maureen Paley Gallery of London was one that could not be missed. This blue and white-painted vase by Sarabia is inspired by the ceramic ware that is handcrafted in Northern Mexico. Through his re-creation of Northern Mexico’s decorative ware, Sarabia explores how globalization has influenced the artistic styles and practices that are used to create these carefully crafted ceramic pieces. In addition to re-creating the ceramic ware that is widely made throughout Northern Mexico, Sarabia includes both images of romantic tropes and issues that have legally been of question in the United States. In the case of this vase on display at Frieze, Sarabia includes an image of a marijuana leaf that attests to the question that American lawmakers have been belaboring for years: Should marijuana usage be legal? While confronting controversial political issues in this piece, images of a woman in the nude surrounded by patterns that resemble the scaling of a mermaid’s tail are a testament to Sarabia’s interest of including traditional, romanticized images on his ceramic ware. Although Sarabia’s ceramic ware is specifically related to Northern Mexico, traces of other cultures are evident in this vase, specifically the ceramic-making traditions of Spain and Portugal. From Portugal’s capital city of Lisbon to the towns of Spain’s Andalucia region in the southern end of the country, ceramic tiles of various shapes, designs, and colors decorate the homes and buildings of many of these towns. Therefore, when the Spanish colonized Mexico, they brought their ceramic craftsman skills to the land as well. Sarabia perfectly unifies both the past and the present in this beautifully-decorated vase.

When I walked over to the Hutchinson Modern Gallery booth, I was immediately allured by this dynamic composition that is filled with overlapping lines that are oriented in many different directions. Many parallels (pun not intended) can be made between this composition by Dominican artist, Freddy Rodriguez, and the paintings of Piet Mondrian from the 21st century.  In fact, Rodriguez was influenced by the paintings of Mondrian, but he used geometric forms in paintings as a source of solace from the emotional distress he endured while living in the Dominican Republic under a dictator. Rodriguez believed that painting and creating geometric forms was a means by which he could counteract any feelings of emotional distress from the political climate because painting forces one to think creatively and from an intellectual perspective. Although Freddy Rodriguez’s paintings were painted as a result of tough political times, he still manages to create bright, dynamic compositions that recall the work of the artist who popularized geometric shapes and lines in painting: Piet Mondrian. Freddy Rodriguez’s paintings are currently on display in a variety of museums throughout the United States and the Dominican Republic, such as El Museo del Barrio in New York City, the Smithsonian American Art Museum in Washington D.C. and the Museo de las Casas Reales in Santo Domingo.