The Crazy and Colorful World of Florine Stettheimer’s Paintings 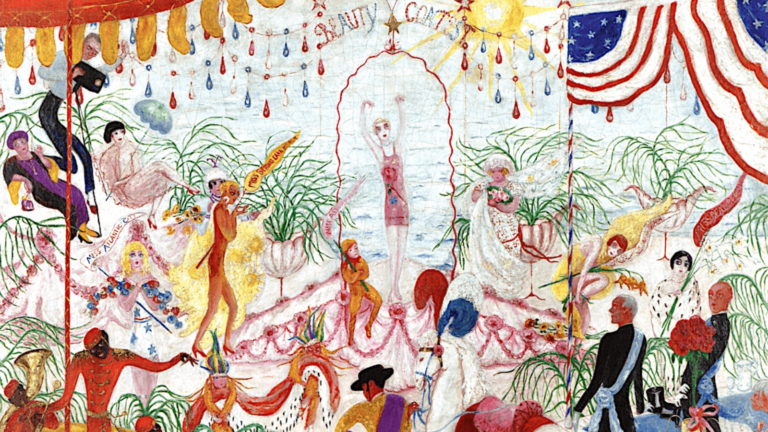 For an art-viewing experience unlike any other, enjoy the paintings of Florine Stettheimer (1871-1944). The daughter of a wealthy German-Jewish family in New York, Stettheimer created an aesthetic that was all her own. She depicted modern scenes of wealthy Jazz Age society in a colorful and festive style that’s as much like folk art as it is like the Avant Garde.

Her paintings seem to gently satirize the charades, habits, and preoccupations of her own upper-class world. However, they seem much too joyful to be pure social critique without any affection for her subjects.

Stettheimer’s figures are whimsical and distorted, as though they inhabit a dream world. They’re lanky and adopt exaggerated posts make them appear as though they’re made of rubber. Her scale and composition are often unexpected, too. The overall effect can look like fine lace in its composition and sweet candy in its colors. She sometimes painted with such thick paint that her canvases can look embroidered when you view them up close. She often included prominent writing in her paintings, giving them a modern, advertising-like feeling. She signed her works in whimsical places, and it can be fun to hunt around to spot her signature.

Stettheimer didn’t often participate in traditional gallery or museum shows. Instead, she preferred to display her work on her own terms at invitation-only events she called “birthday parties”, like the one depicted above. Stettheimer’s family was wealthy, so she didn’t need to sell art to support herself. This probably made her something of an art-world outsider, and it also seems to have given her the freedom to paint however she wanted. But despite the fact that Florine Stettheimer’s paintings rarely appeared on gallery walls, she remained closely connected with important people in the art world. Stettheimer, her mother, and her sisters hosted salons popular with an Avant-Garde crowd, including Marcel Duchamp. These artists, writers, and other personalities appear in many of Stettheimer’s paintings. So do her sisters, her mother, and the artist herself. This has been interpreted to mean that she acknowledged her participation in the social customs she caricatured.

Just because her works look naïve, that doesn’t mean they actually were. Stettheimer was trained at the Art Students’ League in New York and also in Europe, and she was excellent in drawing. Florine Stettheimer’s paintings look untutored completely by choice, and I think that makes them all that much more interesting. She was also well versed in art history. Before World War One, she and her family spent time in Europe, where she experienced a lot of art. She was strongly influenced by the Post Impressionists, but it’s also easy to see her knowledge of art from the more remote past. For example, her own nude self portrait clearly references Manet’s Olympia, and she painted an homage to Botticelli’s Birth of Venus as well. Her figures remind me of medieval marginalia (comical figures painted into the margins of medieval manuscripts) because of their often lengthened proportions and odd behavior, though I’m not sure if there’s anything to that. Stetthiemer moved in Dada circles with people like Duchamp, and her work seems to express a gentler side of the nonsense-loving Dada.

Stettheimer’s most famous works parody the society that she lived in – that of upper-class New York City of the 1910s and 1920s. Her well-known Cathedrals of New York series references four key aspects of New York society – Fifth Avenue, Broadway, Wall Street, and art. But my favorite one of Florine Stettheimer’s paintings is Spring Sale at Bendel’s (above). This work depicts a hoard of women in a frenzy over the newest deals at that great New York City store. Each section of the painting shows at least one charming little vignette of shopping-inspired fervor. The weightless and graceful figures give an elegance and choreographed feeling to the chaos of the scene, as though it was in a Broadway musical. I wonder what Stettheimer would think of a 21st-century Black Friday sale! She also made many portraits of her friends, family, and salon guests. My favorites are of her two sisters, Ettie and Carrie, who both appear as chic and sophisticated flappers.

Florine Stettheimer was clearly an individual – somebody who did her own thing regardless of whether is was popular. She didn’t write very much about her works, and her sister (following Florine’s wishes) purged some of her writing after her death. This means that we don’t know very much about Florine Stettheimer’s paintings or intentions from her own point of view. She also wrote poetry, and that’s probably our best vehicle for understanding her. There’s a lot of room for interpretation, so I think it’s easy for people to see her in whatever light they want. But Florine Stettheimer’s paintings are undoubtedly unique and exciting, so they will probably always suggest different ideas and interpretations to different people. This reaction from a contemporary female painter is worth a listen.

Smith, Roberta. “A Case for the Greatness of Florine Stettheimer“. New York Times. May 18, 2017. Accessed online.

She is an enigma, an ancient, foggy artist from northern Spain in the Middle Ages. We learn nothing about Ende’s identity, life, or whether she...