Around the World with the National Portrait Gallery – P.4 Americas

The National Portrait Gallery in London is due to close its doors starting 29 June 2020. The Inspiring People gallery redevelopment works will take three years. The gallery holds the most extensive collection of portraits in the world. In preparation for this long break, Daily Art Magazine would like to take you for a trip around the world inspired by the works available in the gallery’s extensive online catalog. We’ll visit all continents and meet a host of fascinating people through their amazing portraits.

The New World clearly unleashed people’s passion for adventure. We’ll meet pirates, adventurers, and artists on our trip through the Americas.

Sir Francis Drake (1540-1596) was an admiral and one of the most famous English seafarers. Drake earned his fame and fortune through his skillful seamanship and outstandingly successful piracy. He is best known for his circumnavigation of the globe (1577-81), from which he returned a rich and feared man. His attacks on Spanish shipping contributed to the decision by Philip II of Spain to launch an Armada against England in 1588, a battle in which Drake acted as second in command of the English fleet.

Drake's exploits made him a hero to the English, but his privateering led the Spanish to brand him a pirate, known to them as El Draque. King Philip II allegedly offered a reward for his capture or death of 20,000 ducats, about £6 million (US $8 million) in modern currency.

The public clamored for Drake's likeness. Grandiose full-length portraits such as this one met this demand in court circles. Drake is fashionably dressed in a satin doublet with slashed sleeves and brilliant red jerkin and hose. The crest above his coat of arms shows the hand of God leading his ship, the Golden Hind. Technical analysis shows that the head and upper body were painted on a single board which was later extended. The painting of the tiled floor was designed to imitate marble.

Mary Seacole (1805-1881) was a nurse, adventurer, and writer. Born in Kingston, Jamaica, Seacole owes her reputation to her nursing activities during the Crimean war. Rebuffed probably due to her mixed-race when she tried to join Florence Nightingale's nursing sisters, she traveled independently to Balaklava where she helped open the British Hotel halfway between the harbor and British Headquarters. It served as an officers' club, a canteen for troops and a base for her nursing. She remained in the Crimea until July 1856, returning to England after financial difficulties.

She published her memoir Wonderful Adventures of Mrs Seacole in Many Lands in 1857. A familiar figure to British newspaper readers through the reports of William Howard Russell at the time, she was largely forgotten for decades. The development of Black and Asian historiography from the 1970s has given her a central place in black British history. Posthumously awarded the Jamaican Order of Merit (1991) and voted the greatest black Briton (2004).

After her return to Britain in 1856, Seacole and her business partner had to file for bankruptcy. To raise funds for her support, sympathizers in the British Army organized a sequence of benefit evenings in mid-1857 which coincided with the publication of her autobiography. In 1859 she returned to Jamaica, then in 1863 revisited Panama and in 1865 traveled back to Britain. Further fund-raising in 1867 enabled her to live independently, mostly in London, until her death.

This portrait dates from the last period of Mary Seacole’s life when she was in her sixties. She wears a traditional Caribbean scarf and three roughly delineated medals commemorating her involvement in the Crimean War (1854–6).

Jean Gardner Batten (1909-1982) was a New Zealand-born aviator. She moved to England in 1929 to take her pilot's and ground engineer licenses. In 1934 Batten broke Amy Johnson's record time for the flight from England to Australia. She became the first woman to fly solo over the Atlantic Ocean to Argentina in 1935.

Alexander Bassano opened his photography studio in 1850 in Regent Street, London, moving to Old Bond Street in 1876. The studio was large enough to house an eighty-foot panoramic background scene mounted on rollers, which provided a variety of outdoor or court backgrounds. Bassano retired in around 1903 when the premises were refurbished and relaunched as Bassano Ltd, Royal Photographers. The firm was resold on many occasions but retained the Bassano name and the studio's collection of negatives. In 1964 it incorporated Vandyk to become first Bassano and Vandyk Studios and then, in 1965, Bassano and Vandyk incorporating Elliott and Fry.

A lot of things happened in the year this picture was taken, for example, a new synthetic fabric was invented and named after New York and London: Nylon. Also, commercial airship travel ended with the 'Hindenberg Disaster'. The German airship exploded while landing in New Jersey. The radio broadcaster Herbert Morrison's reaction has become legendary: 'Oh, the humanity!'

Mary English (1789-1846) was an adventurer and businesswoman. She first traveled to South America in 1819, when her husband raised a British legion of mercenaries to fight under Simón Bolívar. Mary tended sick soldiers, reviewed the troops and became friends with Bolívar. After her husband's death in September 1819, she stayed in South America, publishing her letters to England in the London Weekly Dispatch and the Morning Chronicle. She visited England in 1822 but soon returned to Colombia as the commercial representative of the bankers Herring and Richardson. In 1827 she married William Greenup and bought a cacao plantation.

1818, when this portrait was made, was a good year for literature. Mary Shelley anonymously published her masterpiece Frankenstein; or, the Modern Prometheus which reflected growing concern about the role of morality in science. Lord Byron completed his romance Childe Harolde's Pilgrimage, whose gloomy, dissolute hero was probably based on the writer himself.

Walt Whitman (1819 - 1892) was an American poet, essayist, and journalist. A humanist, he was a part of the transition between transcendentalism and realism, incorporating both views in his works. Whitman is among the most influential poets in the American canon, often called the father of free verse. His work was controversial in its time, particularly his poetry collection Leaves of Grass, which was described as obscene for its overt sensuality. Whitman's own life came under scrutiny for his presumed homosexuality.

On the other hand, the volume received great praise from leading Transcendentalist poet Ralph Waldo Emerson. This encouraged what would become a lifelong project as Whitman expanded and rewrote the volume until his death in 1892. Whitman's innovative use of free verse and the quotidian achieved his aim of reaching out to the everyday American.

The author of the picture, Canadian-born Sarony moved to New York in 1836 and worked as a lithographer for Nathaniel Currier until he established his own firm in 1843. Originally self-taught, in 1858 he went to Europe for artistic training. In 1864 he apprenticed himself to his brother, Oliver Sarony, a noted photographer in Scarborough. Within a year he went to Birmingham and partnered with R. W. Thrupp and Martin Laroche. Sarony returned to New York in 1866 and opened a studio on Broadway. He became one of the most famous photographers in America, specializing in photographing actors and actresses. He was particularly noted for the unconventional poses and animated expression he elicited from his sitters. Though it is hard to call Whitman’s expression particularly animated.

The Russian-born ballerina Pavlova (1881-1931) trained at the Imperial Ballet School in St Petersburg and graduated in 1899. She first danced her incomparable Giselle at the Maryinsky Theatre in 1903 and took the role of Aurora in The Sleeping Beauty in 1908. Her most famous solo, The Dying Swan, was created for her in 1907 by Mikhail Fokine. She appeared briefly with the Ballets Russes but preferred to star in her own company and began to tour from 1908. She made her New York and London debuts in 1910, inviting comparison with her rival Adeline Genée. From 1912 she made London her base, living at Ivy House, Golders Green. Pavlova with her own company became the first ballerina to tour around the world, including South America, India, and Australia. This photograph was taken during a tour in Argentina.

Sir Walter Raleigh (1554-1618) was a poet, explorer, soldier, sailor, courtier and favourite of Elizabeth I. Raleigh was a true 'Renaissance Man'. Raleigh was one of the most notable figures of the Elizabethan era. He is also well known for popularising tobacco in England.

Much of his literary work is lost, but about thirty short poems and various prose works survive, including The History of the World. He organized and financed a number of expeditions to North America, and in later life made several unsuccessful attempts to find gold in South America. The family home was at Sherborne Castle, in Dorset. Implicated in plotting against James I, Raleigh spent much of the King's reign in the Tower. He was executed for treason in 1618.

This appears to be the earliest portrait of Walter Raleigh, painted around the time he received his patent to colonize America. Tall, dark-haired and pale, Raleigh is fashionably dressed with a wide ruff that was popular in the 1580s and early 1590s.

As mentioned at the beginning, in this series of posts we’ll be visiting all continents. Stay tuned for more exciting people whose portraits are in the National Portrait Gallery.

Around the World with the National Portrait Gallery – P.1 The Extremes

Around the World with the National Portrait Gallery – P.2 Europe

Around the World with the National Portrait Gallery – P.3 Africa 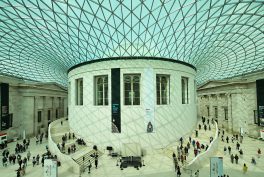 All of the art museums in London have free entry and also host excellent exhibitions worth their ticket prices. Some may be well known locations, and [...]

As we are all in the full swing of summer and ready to explore, we look at the best destinations to visit for art history lovers during vacation. Get [...] 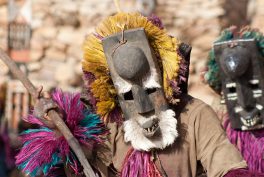 African art and culture had been a driving inspiration to European modern artists like Pablo Picasso, Paul Gauguin, and Amedeo Modigliani, among [...]