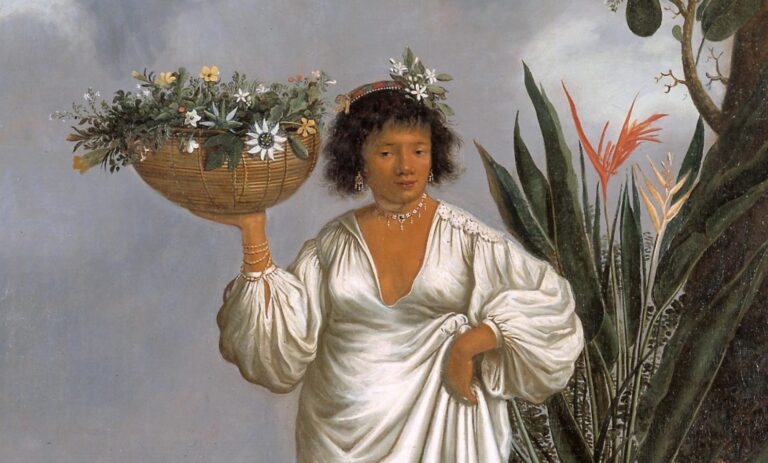 For readers in the northern hemisphere, spring has just begun. For those of us in the southern half of the globe, it’s the fall that presents itself. And if there is a painting that brings me back to a little of both of the two most beautiful seasons of the year, it is certainly Mameluca by Eckhout. This painting is graceful for many reasons. How about falling in love with an artwork today?

When the colonization of Brazil began, in addition to the Portuguese, the Dutch also dominated a part of the region. And in the Dutch delegation led by Maurice of Nassau came artists, who were enchanted with the fauna and flora of the place – the landscape often described as exuberant really was (and often still is). One of these artists was Albert Eckhout.

Eckhout was born in around 1610 in Groningen and came to Brazil in 1637, with the purpose of visually registering the lands just discovered. In fact, Eckhout was basically a visual chronicler. Eckhout’s work has a documentary quality, by portraying the people and places of a land that was then entirely new.

Although all the work of Eckhout is worth mentioning here, today I want to show you only this Brazilian Flora. Not the lush flora that caught the eye of so many painters and naturalists, but Flora, the mythological character so often depicted in painting as the goddess who makes everything flourish.

The first time I saw this painting she immediately reminded me of Rembrandt’s Flora. But the work of Eckhout may have moved me a little more, because it is a character inspired by the Brazilian imagination.

But, returning to Mameluca… The composition of this painting is very beautiful and refers to much of Brazil. Do you see the fruits above the girl’s head? They are cashews, a very common fruit in Brazil, known for its sweetness and softness. Eckhout can make us even notice the texture of the leaves and the trunk of the tree with an impressive technique. This kind of realism was common among the artists who portrayed the American flora, especially from South America.

The detail that most catches attention in this painting, however, is Mameluca herself. Her short curly hair is adorned with a tiara and she wears simple jewelry, which does not suggest that she is rich, but was most likely arranged for the portrait.

The basket with flowers is my favorite part. In addition to the delicate composition, the basket made of vegetable fibers resembles baskets that my mother made when I was a child. Believe me, they are extremely complicated to make (and a real work of art when complete!).

By playing with light and shadow, Eckhout also creates a beautifully layered effect on the girl’s clothes, which look more like a tunic worn in antiquity. She is barefoot and at her feet little rodents gather. Observe every scenario again. Do you have any doubt that Eckhout saw his Mameluca as Flora?

In the context of the Portuguese language, especially in Brazil, the word Mameluca refers to the Mestizo children of Europeans (or their descendants) and Indigene, or the Brazilian natives. During Brazil’s colonial period (1500 – 1815), these people suffered various kinds of segregation, since ‘miscegenation’ (inter-ethnic relationships) was not seen with good eyes in this highly moralistic society. Well, the fact is that the girl portrayed in the painting has this origin, which reinforces the memory of how many people, ethnicities and nationalities helped shape our country – and not only it, but the entire South American continent.