There Is More To Wales Than Coal-Mining, Rugby And Men 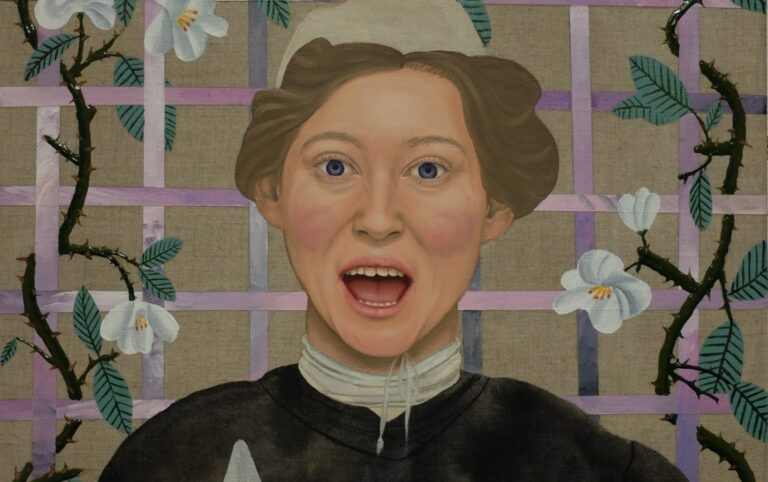 A visit to ‘It’s About Time’ Ceredigion Museum, Wales (running January to April 2018). The visual artist Seren Morgan Jones was born in Aberystwyth, Wales in 1985. She has exhibited throughout the UK and is considered one of Wales’ most promising young painters. She draws heavily from her Welsh background for her artistic inspiration.

This young artist has produced an incredible series of paintings of 19th and 20th Century women called ‘History’s Eyes’ and another of Welsh suffragists from the early 20th Century, ‘Portraits of Protestors’.

At first glance, Seren Morgan Jones’ portraits are very much in the accepted artistic tradition of portraiture. These are strong, realistic head and shoulders images, which look out at the viewer with a powerful and direct gaze. The eyes are penetrating, with vivid skin tones. There is very little background detail on some – the focus is the woman alone.

In others, the background is bright, even gaudy, and the figure almost seems to join with, or compete with, the scenery.

Some include distinctive styles of clothing, symbols and personal artefacts – a very traditional method used to give us clues about the subject. Here we see a suffragette wearing her prison badge.

However, once we look closer, Seren Morgan Jones parts company with painterly tradition as we learn that these women are ‘imaginary composites’. Although the names are real, Seren Morgan Jones has made an assemblage of their facial features, their clothing, their back-story.

The relationship between sitter and artist is an emotionally and artistically charged space. Seren Morgan Jones seems to have side-stepped this completely to retain total control.  In these portraits, there is no ‘sitter’ except the one in her minds-eye.

Perhaps Seren Morgan Jones is playing with us, the audience, or perhaps she is pointing out that there is so little recorded historical narrative of ordinary women’s lives, that there is no choice but to fill in the gaps with creative story-telling. Is this a genuine political statement about the invisibility of women or is it an artist’s conceit?

For the suffragist paintings, Seren Morgan Jones used museum costume collections, old photographs, archival notes and other ephemera to prepare her portraits. What follows is a deliberate mixing of names, faces, clothing, and back stories. In her decision to college and blend these women, is the artist following in the great tradition of male painters who would choose a model and mould her into whatever they wished – usually an idealized, two-dimensional goddess, whore, or mother?

We find that she chose Police photographs of ‘women of ill-repute’ for the faces of the women. She states:

it follows in the tradition of many painters before me using prostitutes and poorer people as models, such as Caravaggio, Lautrec and Degas.

Is Seren Morgan Jones reclaiming women’s complex histories or simply using the disenfranchised for her own ends? At this point, the intention and the integrity of the artist become the focus.

For it is only through her sincere commitment to recognize and celebrate the contribution of women, that Seren Morgan Jones can make her claim to artistic integrity. Her extensive research and sense of duty make these re-imagined portraits very intimate, and real. She says:

It is important that the viewer can relate to these women and for this they must seem to have once lived.

The history of portraiture does not favour women, who mainly appeared as wives or daughters. When we visit a stately home or museum we may enjoy seeing huge oils of beautiful young women in the latest eighteenth-century fashions. But let us not forget that these were marriage market portraits, aimed squarely at the men who would ‘buy’ both the portrait and the woman. Seren Morgan Jones is doing something very different here, using the constructed portrait method to place women centre stage. Their challenging gaze and female power are very evident. This re-imagining is arresting and the viewer has no choice but to engage, to reflect, and to respond.

The lesser known, often unnamed, undocumented women involved in social history are finally ‘named’ and ‘seen’ – quite literally. Fusing real and imagined stories, fusing real and imagined women, these portraits are an interesting and unusual addition to the narrative of what a ‘portrait’ can be, and what it can do. As the artist herself says:

There is more to Wales and its history than coal-mining, rugby and men.

Seren Morgan Jones is giving us lots to think about when we consider the story of Welsh portraiture and the place of women within it.