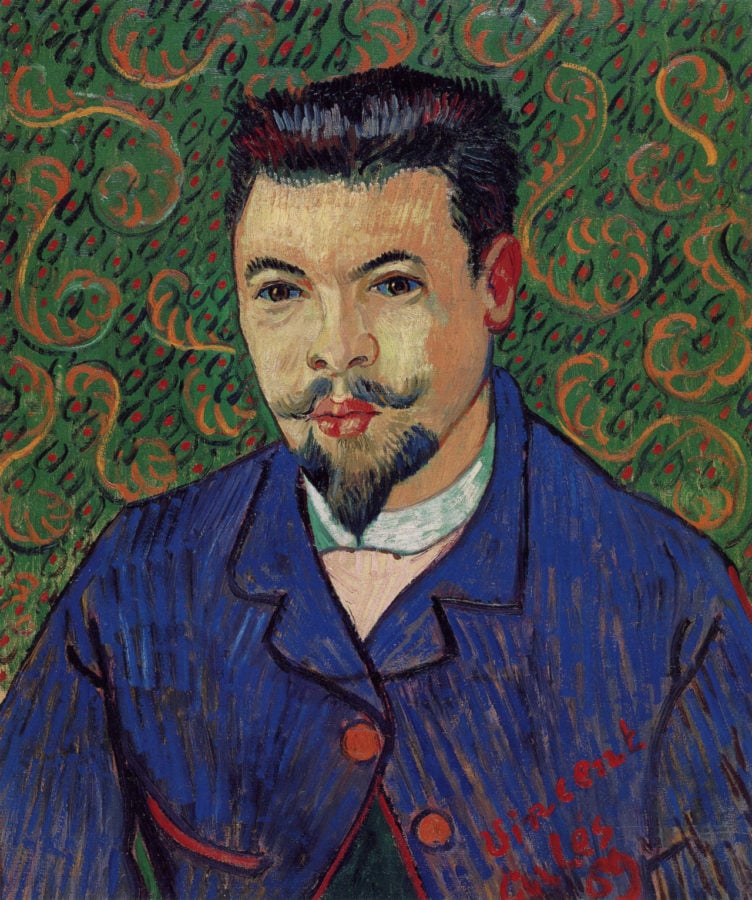 Early the morning of the Christmas Eve 1888, a severely wounded man was brought to the Hôtel-Dieu of Arles for treatment. On duty that night was Félix Rey, a young intern completing his thesis from the University of Montpellier. The patient was Vincent van Gogh, who the night before feeling betrayed by Paul Gauguin had sliced part of his left ear with a razor and taken it to a prostitute, and who now suffered from not only blood loss but hallucinations. A policeman gave the severed ear to the doctor, and according to Dr. Rey in a later interview, it was kept in a jar of alcohol in his office until one day it was stolen.

After fifteen days in the hospital, Vincent returned to his yellow house. Not long after, he painted the doctor who was taking care of him for so many days. Although Dr. Rey accepted the portrait as the gift it was, in later years he admitted he never liked it. In fact, his mother used the painting to patch a hole in the chicken-coop, until it was sold in 1901 to the artist Charles Camoin, a friend of Henri Matisse, who followed in Van Gogh’s footsteps and went to Arles, where he found the portrait in Doctor Rey’s backyard. Now it is in the collection of the State Pushkin Museum of Fine Arts in Moscow.

Vincent spoke often of Dr. Rey in letters to his brother Theo. He took care of van Gogh also times more: a brief stay in February 1889 and a third stint lasting from early March until early May, following a petition from the townspeople who feared Vincent’s illness. When Vincent decided himself to enter the asylum at nearby Saint-Rémy, Dr. Rey supported him and helped ease the transition. Along with the postman Joseph Roulin and the Protestant Reverend Frédéric Salles, the doctor was one of van Gogh’s few friends during the last months he spent in Arles.