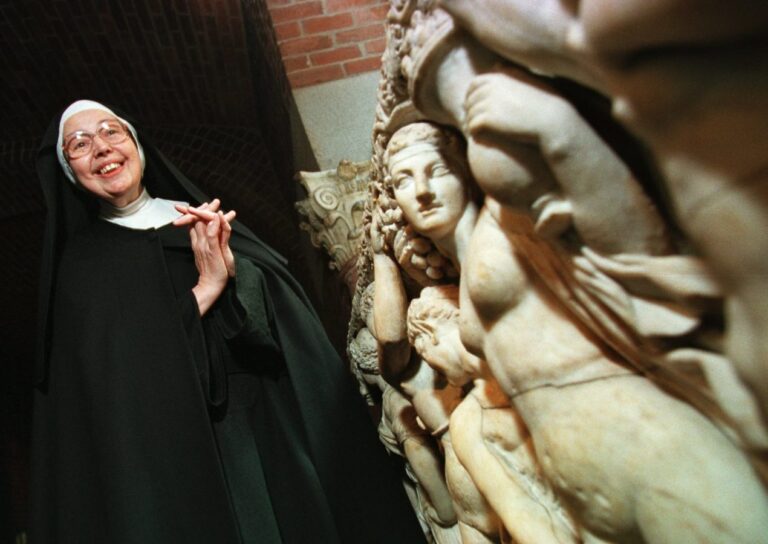 Sister Wendy Beckett (1930-2018) was probably the world’s most unconventional art historian. She was a Carmelite nun who spent most of her life observing a vow of solitude in an English convent. She lived in a basic trailer, rarely speaking to anyone or venturing into the outside world. Instead, she prayed and studied art. In the late 1980s, Sister Wendy’s art historical prowess came to the outside world’s attention.

In order to earn money for her convent, she agreed to do a television series about fine art for the BBC, and she quickly became famous. She was an effective and knowledgeable presenter, and people enjoyed her quirky style and insights. She had a gift for storytelling and drama, as well as a clear passion for her subject matter. This unlikely celebrity eventually traveled the world, recording documentaries for British and U.S. television and writing numerous books. But when she wasn’t on camera, she went back to solitary contemplation. She preferred the quiet monastic life but felt that introducing people to art was a calling too strong to ignore.

Sister Wendy died on December 26, 2018 at the age of 88. Although she hadn’t appeared on television since the early 2000s, she was still a much-loved figure responsible for putting many people on the path of art appreciation. Sister Wendy’s Story of Painting was one of my first art books as a child. So in her honor, let’s learn a few important things from Sister Wendy.

It’s important to be open-minded when looking at art

As a devout Catholic and “Consecrated Virgin”, you might expect Sister Wendy to have been uncomfortable addressing works of art from other religions, nudes, and sexual subject matter. But far from it! She spoke very comfortably and often highly of such works. In a 2000 interview with PBS, she explained her appreciation of non-Christian religious art:

“… all great religions are great because they’re based upon the longings of the human heart. … They’re concerned with the big, beautiful fundamentals, and there I have never had any problem. In fact, anyone who has a narrow sense of their religion, whether they’re Jew or Christian or Muslim or whatever, has only to look long and intelligently at the great work of another tradition and they will see what the religions have in common. …”

To see how comfortably and frankly she handled paintings of nudity, watch this video about Botticelli’s Birth of Venus and this one about Picasso’s Les Desmoiselles d’Avignon. I think that this type of open-mindedness towards things outside our usual preferences is essential for every art lover.

Art is for everybody, and it’s powerful

Sister Wendy always placed great value on art being accessible and enjoyable for everybody. This was the main reason she ventured outside her beloved life of solitude – to help people experience the joys and spiritual benefits of fine art, which she believed should be shared by all. In Sister Wendy’s Grand Tour, she wrote:

“I look forward to the day when it will dawn upon everybody that they can have odysseys and Grand Tours and share the fruits of the world. The capacity to see, to open up the vision of reality that an artist offers, is innate in us all. The greatest reward I could have is to know that, despite my inadequacies, more and more people are coming to believe in their own powers of artistic appreciation.”

It’s clear from just a quick glance at one of her videos that Sister Wendy truly believed in the power of art and beauty. I spend a lot of time looking at and reading about art, but I still came away with a new appreciation and perspective after watching videos like this one. She claimed to not really like either the travel or the attention involved in her endeavors, but she said she felt good when hearing from people who were positively impacted by her work.

Sister Wendy was well educated, but not in art history. She graduated from Oxford with high honors in English literature, and one of her original jobs in her monastery was translating Medieval Latin texts. While she always loved art, she only started studying it after she became too sick to continue her translation work. And when she did begin studying it, she did so all on her own, through books. In fact, she didn’t actually see most works in person until she visited museums to film her lectures. She basically taught herself everything she knew about art, and then she taught it to lots of other people. So, don’t ever think that you can’t enjoy and understand art if you don’t have an art history degree. And, while it’s always recommended to spend lots of time in the actual presence of artworks, you can still cultivate knowledge and appreciation even if your situation doesn’t allow for it.

It’s ok to be different

Sister Wendy was definitely not what you would expect in either an art critic or a television personality. Some people – who were mainly other art historians and public figures – didn’t appreciate her black habit, big teeth, or lack of formal art history training. But most viewers really liked her anyway, because she had a great personality on screen, she knew her art, and she made it interesting to them. In fact, being unusual might have even helped her. There’s little question that she caught a lot of people’s attention by walking around major museums in her nun’s attire, looking and sounding like a conservative grandmother, and then saying perceptive and sassy things like this She had a musical written about her, so people clearly found her compelling. I think that her popular acclaim can inspire all of us at times when we feel like we don’t fit the mold.

Like Sister Wendy, I believe that art is for everyone. That’s why I have so much respect and admiration for her mission to share her love of art with the world. I hope that her books and videos will continue to inspire people to visit museums. You can find a full list of her works here. Many are available at local libraries, and you can also see clips of her documentaries on YouTube.