Sacred and Profane Love is mysterious an oil painting by Titian, probably painted in 1514, early in his career. The painting is presumed to have been commissioned by Niccolò Aurelio, a secretary to the Venetian Council of Ten to celebrate his marriage to a young widow, Laura Bagarotto. It perhaps depicts a figure representing the bride dressed in white, sitting beside Cupid and accompanied by the goddess Venus. But we don't know that for sure. [caption id="attachment_7809" align="aligncenter" width="748"]

Titian, Sacred and Profane Love, 1514, Galleria Borghese, Rome[/caption] The iconography of this painting is very mysterious. Some measure of consensus has been achieved but basic aspects of the intended meaning of the painting, including the identity of the central figures, remain disputed. [caption id="attachment_7712" align="aligncenter" width="620"] 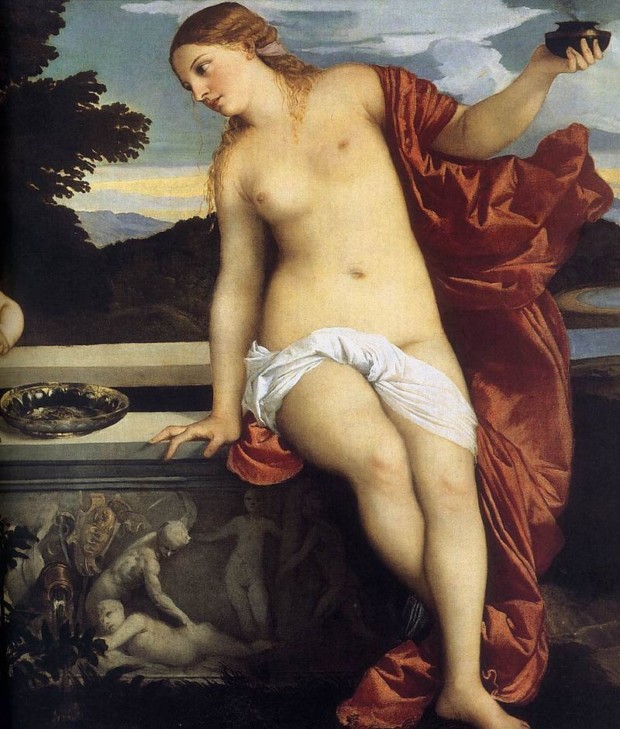 Titian, Sacred and Profane Love, 1514,Galleria Borghese, Rome, detail[/caption] There have been a number of conflicting interpretations of the painting. We have already stated that most interpretations in recent decades see the painting as commemorating a marriage. The figures seem physically identical, but their clothing is so different, need to be assigned identities, at which point agreement ends. While the trend in recent years has been to downplay complicated and obscure explanations of the iconography of paintings by Titian (and other Venetian painters), in this case, no straightforward interpretation has been found. [caption id="attachment_7713" align="aligncenter" width="290"] 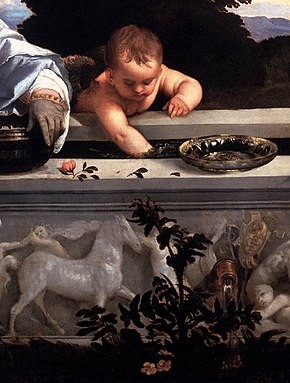 Titian, Sacred and Profane Love, 1514, Galleria Borghese, Rome, detail[/caption] Scholars have proposed several identifications of the figures and analyses and interpretations which largely flow from these. The concept of Geminae Veneres or "Twin Venuses", a dual nature in Venus, was well developed in both classical thought and Renaissance Neoplatonism, with the earthly Aphrodite Pandemos, representing carnal love and beauty, and the heavenly Aphrodite Urania representing a higher and more spiritual love, using the classical terms for the figures. Erwin Panofsky and others found both in the painting, with the earthly Venus the nude one. It has also been suggested that the painting contains asserts by allegory the innocence of Laura Bagarotto's father, who had been executed by the Republic of Venice for treason in 1509. In this interpretation the contents of the urn beside the clothed woman are the ashes of the bride's father, and the naked figure is Venus as Truth, and/or Charity. But it sounds a little too complicated. Probably we will never find out the initial meaning of this painting. But what we are left with is the beautiful, mysterious scene which gives us the evidence of Titian's genius :) If you want to more know about Titian, have a look at the article "Titian’s Women Who Are In Fact The Same Woman".