Through Scissors and Shadows: The Art and Films of Lotte Reiniger 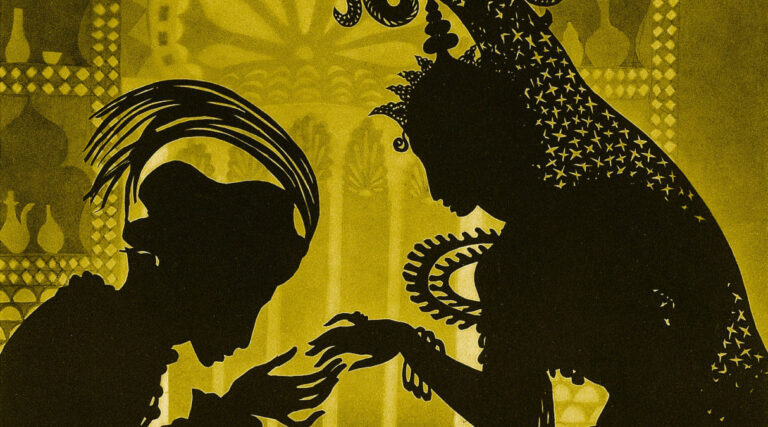 Late one night while struggling with a bit of insomnia, I was channel surfing. I came across a stunning and hypnotic, silent, animated film that was so enthralling, I easily stayed awake to finish it. The film was Lotte Reiniger’s The Adventures of Prince Achmed (1926). It was one of the earliest full-length animated films and done in stop-motion with silhouette figures. Reiniger developed her own style of paper silhouettes and the multi-plane camera she used to film them.

“Pioneer” is used a lot in the art world, but in Lotte’s case, her work truly was revolutionary. She was born Charlotte Reiniger in 1899 in Berlin, Germany. Inspired by contemporary German actors and Asian silhouette cut-outs, she developed a passion for acting and puppetry from a young age. Of her early years, Lotte said: “I then was an enthusiastic maiden who could really do nothing at all well but cut out silhouettes, but who desperately wanted to get into films.” To hone her craft, she eventually joined Berliner Institut für Kulturforschung. There she met artists such as Bertolt Brecht and Carl Koch, who was to become her husband and collaborator. The silhouette animation style she developed was unique and completely of her making, though she described herself as a “primitive caveman artist”.

Lotte had made silhouette films since the 1910s, but Die Abenteuer des Prinzen Achmed (The Adventures of Prince Achmed) is considered the earliest surviving full-length animated film. Numerous scores have been added over the years, and no original copies of the film exist. The laborious work took three years to make (1923-26). Each silhouette figure had to be moved and put into place for each scene. It was also an incredibly experimental project, as nothing like it had been done before.

The figurines were made from heavy paper, weighted with lead and wire hinges at the joints to allow for all the different positionings. The details and movements are beautiful, sculptural and expressive. It was based on various stories from One Thousand and One Nights. The characters include the Prince, a Princess, witches, a sorcerer, a genie and the lamp.

Reiniger would make around 60 films, of which 40 survive, from the 1910s to the 1970s. They were done with her trademark silhouette figures and backgrounds and drew greatly from fairy tales and myths. Lotte was quoted as saying “I believe more in fairy tales than newspapers.” The films include Cinderella, Thumbelina, Puss and Boots and Sleeping Beauty. She was also heavily inspired by classical music, especially Mozart, and used his music to develop her films.

Another contribution she made to the film industry was the first use of a multiplane camera for animation. She used it for the filming of the Adventures of Prince Achmed. While not as sophisticated as those later developed in European studios and eventually at Disney, it was a predecessor of animation overlaying. The camera filmed through several layers of glass, each with a different scene or character layered upon each other.

The rise of the Nazi Party forced Lotte and her husband to emigrate to numerous countries. They were never granted permanent visas. Their liberal political views made it a difficult time for them to continue living in Germany. Eventually they went to live and work in the UK. There they created productions for the BBC.

Lotte’s husband, Carl, had been a huge collaborator with her work, and when he died in 1963, she took a decade long hiatus. She then completed three short films before her own death in 1981.

Though not as famous as other animators, Reiniger’s influence continued over the decades. She touched not only animators, but also film makers, graphic designers, and composers. Google Doodle featured her in 2016, and several new scores have been composed all over the world for her films. With all the technicality and skill involved in her works, they evoked and revered a simple, pure form of story telling that was so important to her.

If you like animation and art, check our investigation on famous works of art which appeared in BoJack Horseman here!