The Art of Metamorphosis 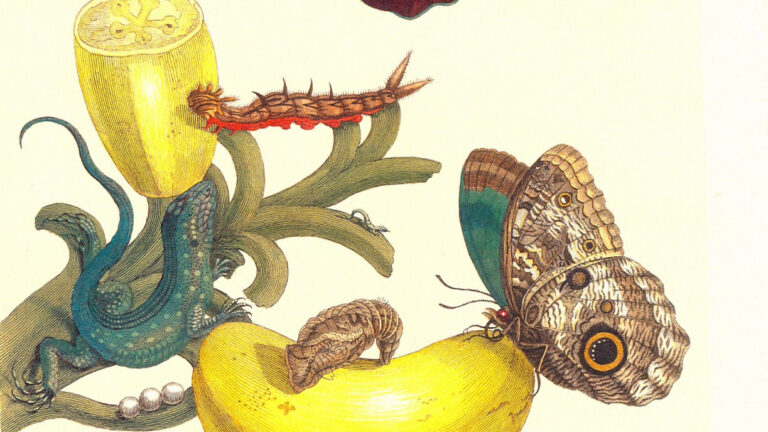 “she broke the rules of time, fragmenting and aligning it, to sew the fundamental phases of her subjects’ transformation: she  brought us the revolutionary art of Metamorphosis”

We all master an underestimated craft. You probably know the feeling of being fueled with the thrill of change – washed with inspiration and perfectionism – after visiting an amazing Gallery, concert or movie: only to be found around the same spot, with the same dull old thought, as a new day breaks. That’s because, although unaware, we’re mighty cocoon weavers.

The fine thread of the silkworm – like the spider’s intricate mosaics – were still seen as done by the “beasts of the Devil”, when a young Sibylla Merian became fascinated with the teeming, tiny kingdom of life, jumping, crawling and flying amid her garden. It wouldn’t take long from these innocent backyard expeditions until her defiance against tradition, dismissing the classical role of the XVII century woman to pursue a rather frown upon career in entomology.

No detail should be too small for those studying insects, yet the precision Merian gifted her work with stretched beyond science. As a trained artist, Merian sought a faithful depiction of form and colour through a holistic composition — she broke the rules of time, fragmenting and aligning it, to sew the fundamental phases of her subjects transformation: the brought us the revolutionary art of Metamorphosis.

This deep outgrowth renewal was still largely unknown. Many people still though insects were born out of mud from spontaneous generation, and for a static era, transformation was a concept with no perceivable examples — a peasant would die a peasant, animals were created by God in their unique and final stage, slaves came from the wilderness with minor capacity and were meant to be exploited — so the consciousness of not only the possibility, but the natural tendency that impels a crawling caterpillar to break from its old self and fly was an evolutionary hope.

Merian set herself to study the forces of change, and so she did. Divorced and dependent on her own resources, she made a living off her painting when the guild system in place didn’t even allow women to paint with oil. She would also set sail to Suriname, to pursue her discoveries, when only men received royal funds to study the colonies. There she dared to contest imperialism by sliding critiques of the colonial treatment of slaves into her scientific work. She would also empower and validate indigenous culture by deciding to remain and spread the tribe’s name for the insects she catalogued, instead of granting them a Latin name to suit Europe’s scientific language.

Let’s imagine the universe as a rainbow linen carpet, and say that’s your wish to collect many colourful threads. Because you can only store a certain amount of lines, choosing to follow one set of colours will mean to give up on others. Also, you’re starting to notice that a colour increases in nuance as you keep pursuing it. Those lines are neuro-connections, and represent the brain shaping Neuroplasticity – and it goes both ways – adapting your mind to your circumstances, and your reality to the means you have of perceiving it.

Growing old, we knit the space around us with the threads we’ve collected. While these selected colourful lines allow us to function — setting a musical world for a musician and a probabilistic world to a mathematician — this weave cocoon is often used as a blanket to comfort us within a relatable and predictable world. Warm and cosy, it’s hard to undress the threads that through a lifetime I’ve learned to master. and exit to a new, unpredictable, territory.

Division feeds itself with the space between perspectives. Maybe, if we keep reaching outwards, we’ll be able to pass all phases — our childhood as a blind thread collecting caterpillar, then knitting our valuable unique cocoon, and finally, gloom flying free: metamorphosing beyond a previous, restrained and biased, self.