The Museum of the Future Opens in Dubai 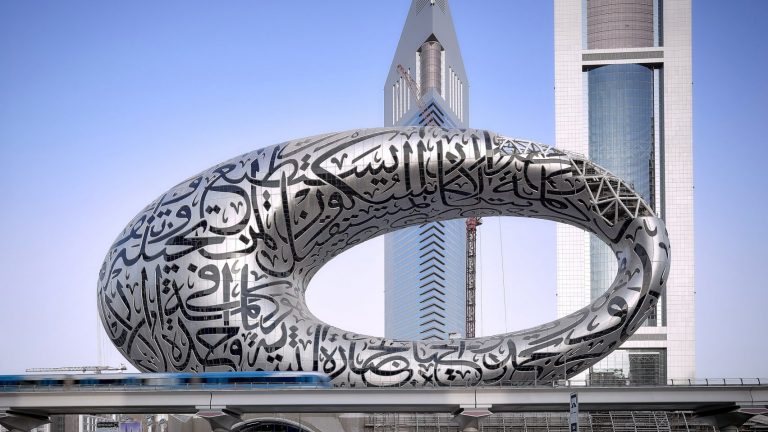 The Museum of the Future, Dubai, UAE. UBM Magazine.

How to Catch a Unicorn – What Is an Art Unicorn Startup?

The newly opened Museum of the Future in Dubai, which has recently caught a lot of attention, turns out to have been one of the most challenging construction projects ever attempted, but the impression it makes was well worth the effort. The museum’s unique form and exhibition spaces bring us to the year 2071, so the future is nearer than it has ever been!

Dubai seems to be a big construction site just in the middle of the desert. High towers pop up almost overnight and constantly change the way the city looks. The Museum of the Future has been talked about long ago in the architecture world. It has been due to a very complicated construction of the building itself but also a very inspiring vision for the whole concept and the exhibition it planned to show to the audience.

The Construction of the Building

The museum’s framework comprises 2,400 diagonally intersecting steel members and its design won in a competition by a local architectural firm, Killa Design. It’s them who came up with the unusual shape of the building. According to the museum’s designers, the solid part of the structure represents the knowledge that we have today. The void, on the other hand, shows us all the knowledge that is still out of our reach – meaning the future.

Moreover, each panel of the facade is covered with Arabic calligraphy. The words are phrases of poetry written by Dubai’s ruler Sheikh Mohammed Bin Rashid Al Maktoum, who is also the Vice President, Prime Minister, and the Minister of Defense of the United Arab Emirates.

Technology was an important aspect and the enabler of the project. It was only possible to construct the museum by using parametric design and building information modeling. Parametric design is a method based on algorithmic thinking. In this process, specific variables or parameters are manipulated to alter the outcome of the equation.

Building information modeling is a process that improves how architects and engineers design and construct buildings. With BIM and its tools, it is possible for them to create a digital 3D model of the building and see a representation of what it will look like and how it will operate in real life.

What Future Can We See Inside?

The opening ceremony took place on February 22, 2022. The lights of the ceremony could be seen across Dubai and the whole event was an amazing light show accompanied by the Arabian Philharmonic Orchestra that played the UAE national anthem.

Before the opening, the Dubai Media Office released a video on social media showing the upper segment of the Museum opening up and welcoming an object that looked like a spaceship. The clip quickly went viral, causing a lot of debate.

Inside, the museum has seven floors and each of them is dedicated to a different exhibition space. On one hand, the floors focus on current technological research, and on the other, they are devoted to ongoing research development for future space travels, bio-engineering, human well-being, and near-future technologies that are not yet developed.

But let’s start from the very beginning…

Entering the lobby is an adventure itself. It is spacious and impressive and, above your head, you can see a flying object which looks a bit like a flying penguin. It’s cute and makes you stare up in the air all the time while it moves over your head and you are wondering whether soon we will have at home some mechanical animals as pets.

First, the Museum takes us on a journey to the year 2071 and envisions what the world can look like 50 years from now. After the introduction made by an artificial intelligence guide named Aya, you enter a spaceship and go 600 km far from the Earth to find yourself on a space station called OSS Hope.

The Museum imagines a future where OSS Hope directs humanity’s collective energy project called Sol Project. The project shows the moon covered by countless solar panels that direct energy towards nodes on Earth. You can also see such inventions like asteroid water, nanodevices to repair things, and exo-skin.

In the next room, you can apply for certain positions on OSS Hope like Mars Colony Ambassador to Earth.

Going back to Earth, we enter in my opinion, the most stunning part of the exhibition. It is a darkened, mirrored space illuminated by columns of small glass cylinders with the illusory DNA of animals and plants that have gone extinct. Called HEAL’s DNA vault, it is a place where people store the genetic code of thousands of species, including the polar bear, whose Arctic habitat is currently threatened by global warming.

Later on, we enter The Laboratory – HEAL’s ecosystem simulator where they test how new species – created from mixed DNA of existing and extinct animals and plants – will impact the environment. And finally, in The Observatory, new species are evaluated and overseen. As a quote of Hu Wenhuan says,

The ancestors plant the trees, the descendents enjoy the shade.

The next floor is one devoted to our well-being. Despite our technological abundance, depression, anxiety, loneliness, and addiction remain common. So this is the place where you can come closer to your body, listen to your senses, and silence the constant voice in your head wanting more and more.

In the museum, we can also experience an exhibition, Tomorrow Today, exploring how designers, researchers, and corporations respond to some current challenges. It is inspired by the question posed by influential architect Cedric Price in 1966: “technology is the answer, but, what was the question?” Now, this question feels more relevant than ever. This part shows us such inventions as wireless charging tracks, new prototypes of aircrafts, solar power towers, smart plates, etc.

So What Is the Future?

The Museum of the Future in Dubai is a very inspirational experience where, through exploration and interaction with various technologies, you can be nearer to the future than ever before. It makes an impression and provides a combination of elements that ask thought-provoking questions.

You leave the place astonished, curious, and with a mixture of optimism and fear. According to the initiators of the museum, it will function as a platform through which philosophies, learnings, ideas, and designs can be shared. Designed to inspire, it is a great vision of the world that can be saved if we collectively work on its future and find the right questions for the technological answers.

Are you a fan of ballet? If so, this year Art Safari in Bucharest, Romania is hosting the long-awaited show Le Tricorne: Picasso, Dalí & Falla...