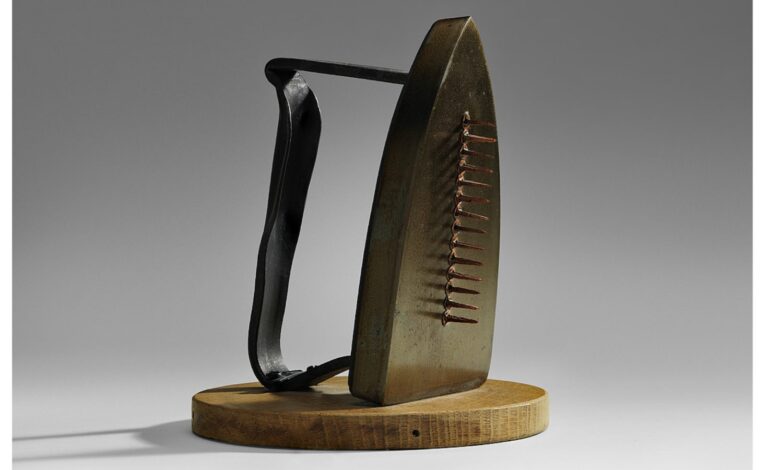 Man Ray's Cadeau, 1921, editioned replica 1972, known also as a ‘Gift’, is one of the famous icons of the surrealist movement. It consists of an everyday continental flat iron of the sort that had to be heated on a stove, transformed here into a non-functional, disturbing object by the addition of a single row of fourteen nails. Man Ray loved such transitions - but he never destroys, he always modifies and enriches. In this case, he provides the flatiron with a new role, a role that we dimly guess, and the probably accounts for the object’s strange fascination. The artists once said: ‘There are objects that need names". The Gift is a conjunction of two alien objects. One represents domesticity and possibly femininity; the other represents carpentry and hence masculinity. In 1974, Ray made 5,000 replicas of Gift as a limited edition. [caption id="attachment_7088" align="aligncenter" width="620"] 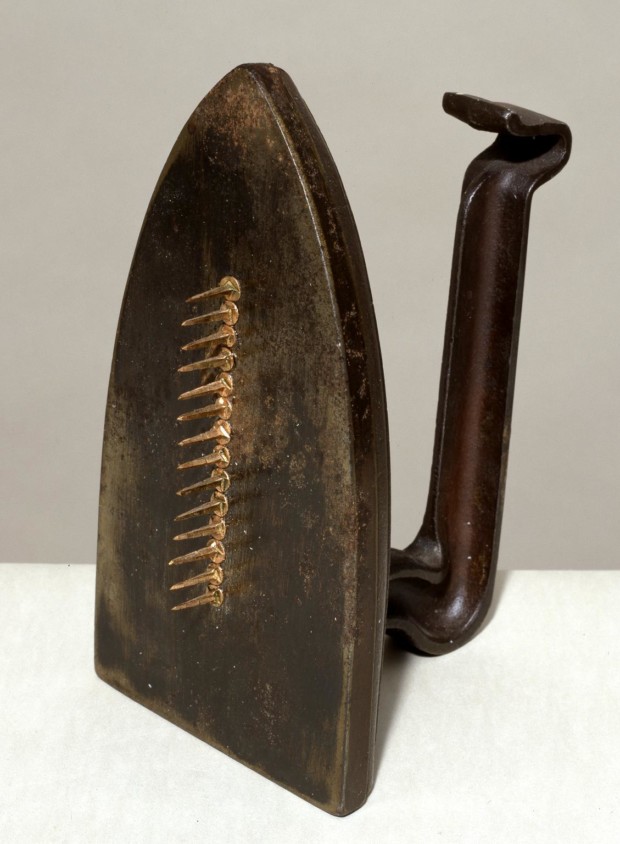 Man Ray, Cadeau, 1921, editioned replica 1972, Tate[/caption] In his autobiography Man Ray recounted the story of the making of the original Cadeau. On the day of the opening of his first solo exhibition in Paris he had a drink with the composer Erik Satie and on leaving the café saw a hardware store. There with Satie’s help – Man Ray spoke only poor French at this point – he bought the iron, some glue and some nails, and went to the gallery where he made the object on the spot. He intended his friends to draw lots for the work, called ‘Cadeau’, but the piece was stolen during the course of the afternoon. Man Ray’ is widely known as a photographer - unfortunately his objects are not particularly widely known. A number of the earliest works were lost or accidentally destroyed. Others are known primarily as photographs reproduced in surrealist magazines and their status as objects has been obscured by the celebrity of the photographic images. In fact, Man Ray sometimes made objects in order to photograph them, and then discarded them, or reused them in other ways. He also remade some works, thereby creating new originals, and when, in the 1960s and 1970s, there was a greater commercial interest in the objects, he, like Duchamp, arranged for some of his objects to be produced in editions. In 1974, Ray made 5,000 replicas of Gift as a limited edition.