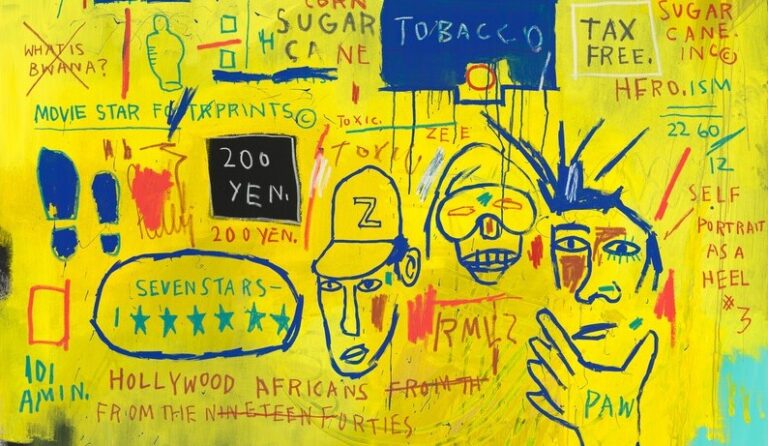 What do Jean-Michel Basquiat, The François Vase, Tracey Emin and Xu Bing have in common? Words! So, in the spirit of light summer reading, let's have a romp through a collection of four unrelated artworks from around the world.

The pen is mightier than the sword, but are words mightier within pictures?

Words on the François Vase

It's all Greek to me! This Attic volute krater is one of the best examples of black-figure pottery that exists today. Not only does a mind-boggling array of mythological scenes adorn it but also, you've guessed it, words. The vase has 121 labels, naming anything and everything from the figures depicted to random things like water-vases and dogs. It's possible that this wonder over words is because, at the time, writing was a new invention and was a way of showing off.

Xu Bing, The Book from the Sky

The Book from the Sky is a four-volume work that was made between 1987 and 1991. Made-up Chinese characters are its content. They look so real that many people just didn't believe it was illegible. As Xu Bing noted, the false characters “seem to upset intellectuals,” inspiring doubt in received systems of knowledge. In the 1950s and 1960s the Chinese government made laboured efforts to create simplified Chinese, which might be an interesting background for the artwork. Find out more about Xu Bing here.

Like many of Jean-Michel Basquiat's works Hollywood Africans is beautified with shouty and captivating words. This painting has parts that resemble a billboard advert for a film and it also includes what looks like an advert for Tobacco. There are words that denote racial stereotypes, and even a pun ("paw paw"). On many levels this piece is an indictment of institutionalised racism in the film industry. How else does it speak to you?

"I Want My Time with You"

This message is directly in view of the exit from the Eurostar at Saint Pancras station in London. British artist, Tracey Emin, acknowledges the romance of train stations while also sending a love-letter to Europe against the background of Brexit preparations. Read more here.