Usually on our Painting of the Week cycle we feature internationally acclaimed masterpieces. But today we wanted to feature a beautiful painting, that unfortunately is more known locally. It’s Strange Garden, painted by Polish Jozef Mehoffer in 1902-1903 from the collection of the National Museum in Warsaw. 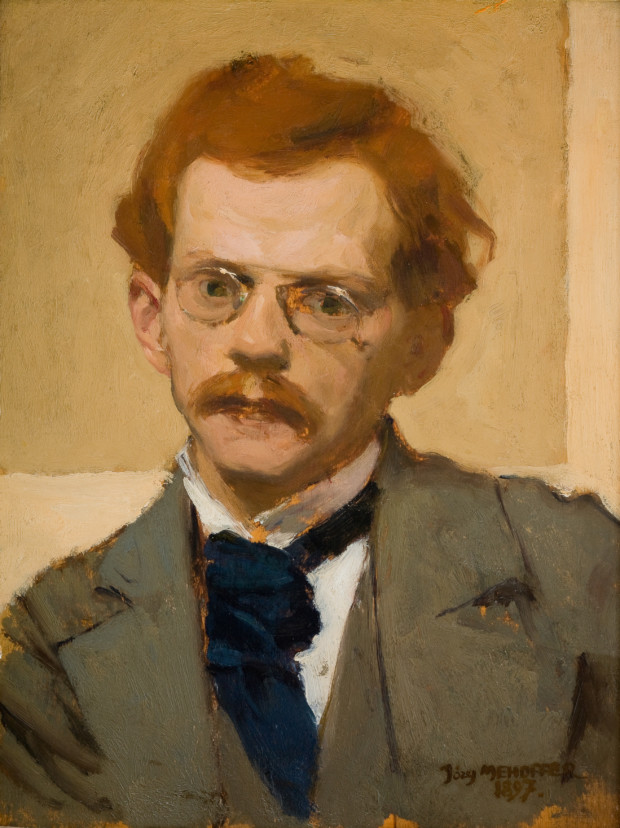 Mehoffer was a painter, graphic artist, printmaker, designer of stained glass, textiles, theatre sets, posters, interior decoration and furniture, leading representative of Young Poland. His international acclaim came with designs of stained glass windows for the Gothic St Nicholas collegiate church in Freiburg, Switzerland but he was most well known in Poland. His monumental painting was an excellent manifestation of the rich symbolism and decorative trends in Polish modernism and of the artist’s masterly technique. His art was strongly influenced by the monumental painting of Puvis de Chavannes, which he saw in Paris, and the Nabist art, which he came to know through Władysław Ślewiński. His art of 1891-5 was influenced by Symbolism and Post-Impressionism. 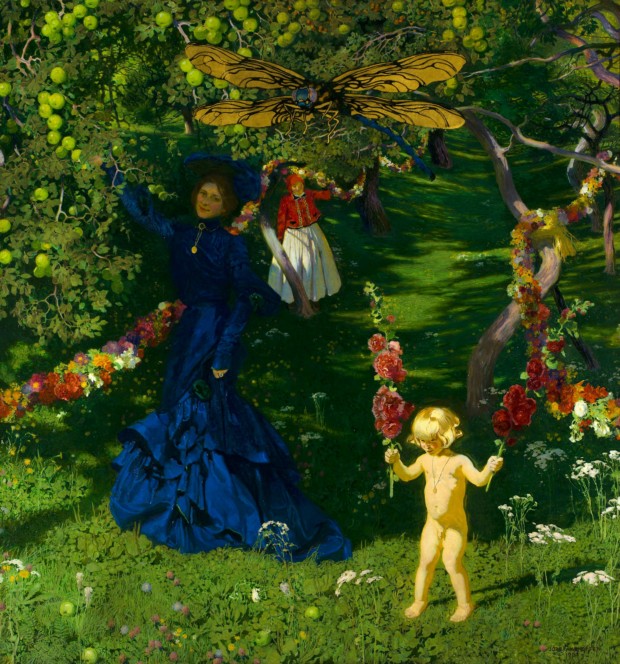 Strange Garden is one of the most exquisite and mysterious works in the history of Polish painting. It was made during a very significant period in Mehoffer’s life – when already became successful as an artist and was happily married. Mehoffer produced The Strange Garden when he was away on a family holiday. In the painting, he captures familial happiness. 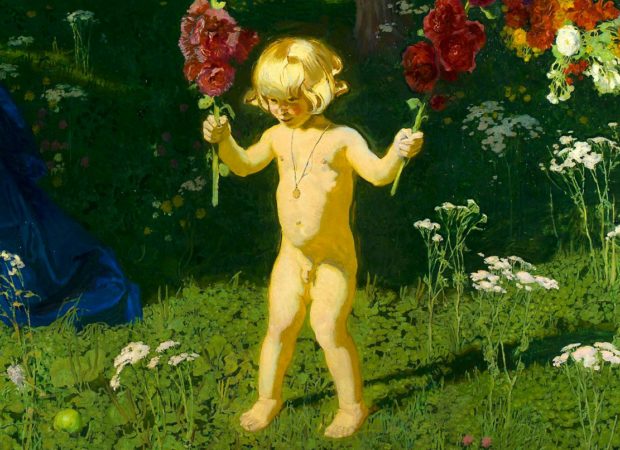 The glowing, golden boy gathers our attention. Withdrawn somewhat into the shade, the woman wearing a sapphire gown looks on close by while a massive sapphire dragonfly hovers over them with its golden latticework wings outstretched in a protective embrace.

You are probably amused by this huge insect. An excerpt from a letter the artist wrote to his wife helps us to interpret its symbolic meaning: “Now, you are to me practically synonymous with the colour of sapphire, and holding you close, though across such a distance, I immerse myself in that colour.” Perhaps, this suggests that the dragonfly keeping watch over the family, which Mehoffer had identified as a symbol for the sun, is actually the artist himself.

Several years before painting the picture, Mehoffer had written in his journal: “I can’t say that I know what to paint, the idea is a general one: an idea of life, delight, pleasure, joy, light, sunshine and warmth.”

A perfect painting to celebrate summer 🙂