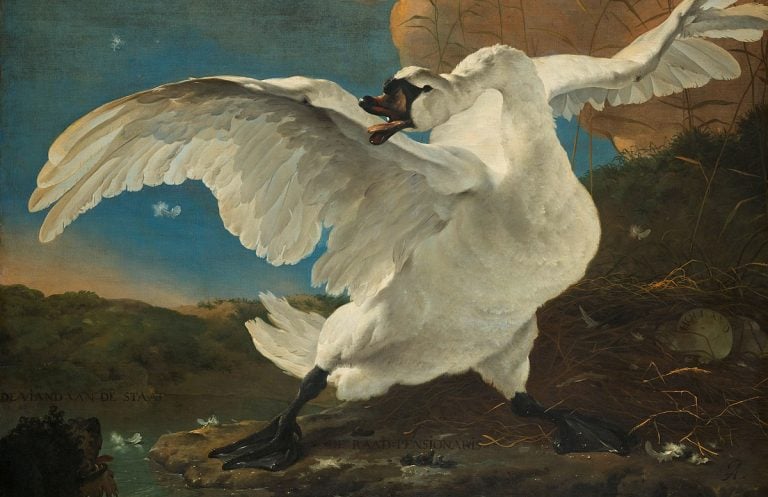 Swans are normally characterized as graceful birds. They are magnificent and majestic. However, Jan Asselijn displays another side of these elegant birds. In Threatened Swan, we witness a fierce, protective, and powerful nature of motherhood. Yet, we are witnessing something more than just a wildlife scene. We are witnessing a political commentary through dramatic symbols.

When the Netherlands gained official recognition of independence in 1648 (Peace of Münster), it sparked massive land reclamation projects. Dikes and drainage systems were built throughout the Dutch landscape, which increased the amount of workable land. The expansion of the Dutch terrain created a sense of national identity and pride. These themes are reflected in some of the major paintings of the Dutch Golden Age, especially in Jan Asselijn’s Threatened Swan.

Jan Asselijn created Threatened Swan around 1650, shortly after the Peace of Münster. Threatened Swan depicts a large white mute swan with its wings spread as it holds a dramatic stance of aggression and protection. Its aggression is aimed towards the approaching dog in the lower left corner. Its protection is aimed towards the endangered nest in the right mid-ground. We see a mother swan in full action, protecting its unhatched babies.

Jan Asselijn uses a low horizon to allow the swan to dominate the scene. It towers over the background landscape and the foreground dog, and it fills at least ⅓ of the painting’s surface area. Threatened Swan is a large painting at 144 cm (4’ 9”) high and 171 cm (5’ 7”) wide, which allows the swan to be painted on a life-size scale. Viewed in person, Threatened Swan is truly a monumental painting in scale and drama. The bird’s hostile energy reflects through the scattered feathers that have been released through her violent movements. These ousted feathers are physical manifestations of her combative position.

Beneath the combative swan is painted the words “DE RAAD-PENSIONARIS,” translated as “The Grand Pensionary.” On one of the eggs to the right of the swan is painted “HOLLAND” for the Dutch province of Holland. Above the dog in the lower right corner is painted “DE VIAND VAN DE STAAT” translated as “The Enemy of the State.” These labels are later additions by an unknown contributor. They are not original to Jan Asselijn’s painting. Scholars believe these belated additions were added in the late 1660s or early 1670s, approaching the end of the Dutch Golden Age.

“The Grand Pensionary” probably refers to Johan de Witt, who was the Grand Pensionary from 1653 to 1672. He was known as a great advocate for the Dutch Republic, and he was also one of the foremost European statesmen of the 17th century. His dramatic and gruesome death became legendary. “Holland,” while it is a single province of the Dutch Republic, is often used informally and interchangeably for the republic because of its political and economic dominance over other Dutch provinces. “The Enemy of the State” refers to Spain, England, and France, who were the traditional enemies of the Dutch Republic.

Jan Asselijn’s Threatened Swan is a grand painting encapsulating the spirit of its age. It is rendered beautifully with a precision to anatomical accuracy and sensitivity to the emotions and feelings of its subject. It is credible and honest in its depiction. Threatened Swan has not only naturalistic drama, but it has allegorical and moralistic overtones. There is no surprise to learn Threatened Swan was the first painting purchased by the Rijksmuseum in 1800 when it began creating its collection.