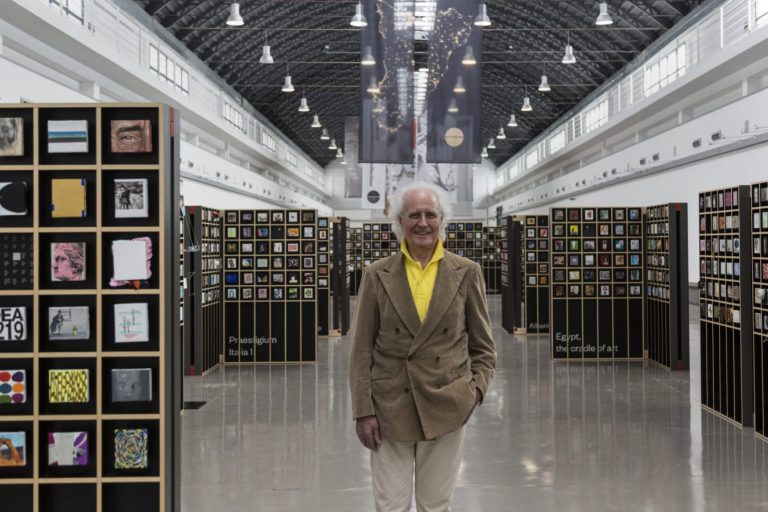 Imago Mundi is a very unusual museum of contemporary art. Or maybe I should rather call it an archive, or an encyclopedia which showcases the art from almost all world cultures. Yet, instead of pages, it uses small canvases sized 10x12cm, which have been sent to Italy from all over the globe.

Luciano Benetton, 85 years old Italian billionaire whose surname you may know for the fashion brand, is one of the co-founders, together with his siblings, of the famous Benetton Group. He is an avid traveller and art aficionado. Over ten years ago, on one of his far-away travels, he met an artist who wanted to gift him his work. However, Benetton refused as he didn’t have enough space in his suitcase for the canvas. The artist asked him to return a day later. When he arrived again to the artist’s studio, he was presented with a tiny 10×12 cm portable canvas, which so appealed to Benetton’s liking and imagination, that he decided to start an entire collection of such tiny works, coming from contemporary artists from various countries.

The official opening of the collection called Imago Mundi took place in 2013, when it was launched as one of the collateral events of the 55th Biennale di Venezia. The show showcased 5 collections of tiny works (called by Benetton ‘name cards’ that the artists create in order to be remembered) from the United States, South Korea, India, Japan, and Australian Aborigines’. It is impressive to learn that today the museum hosts 160 diverse collections, featuring over 26 thousand contemporary artists (many of them young and emergent in the art market) from over 170 nations or native communities, such as Kurds, the San People, or the Ainu.

How does it work?

Each single cultural collection is curated by a local curator (they can be an artist, an art expert, a museum director), who is responsible for selecting between 140 and 210 artists. The artists can create the work in any media and on any theme, but they are asked to stick to the small dimensions of 10x 12 cm. As the curator for the Thai collection admitted, some artists reject the invitation from the start because of this limitation, others realize after having accepted that they are unable to make something so small.

Where are they all stored?

Each national/ethnic collection is hosted in mobile structures specially designed by architect Tobia Scarpa (son of famous Italian architect known for his minimalist reworkings of many Italian museums) to give each little work the same visibility. The mobility of the structures was a necessary requirement because the Imago Mundi collections do travel the world: Venice, New York, Vienna, Dakar, Sarajevo, Rome, Palermo, Toronto… Their permanent home is however in the native city of Luciano Benetton, Treviso, which is itself a small town in the Veneto region in the North of Italy. You can find them in Gallerie delle Prigioni (Prison Galleries), named after the renovated ex-Austro-Hungarian prisons which has been lending the museum their premises since 2018. Moreover, each collection gets a public show and publishes a catalogue written in Italian, English and the local language(s) of the culture featured.

What’s the point of all this?

Imago Mundi is a non-profit project whose overarching objective is to create the broadest map possible of global creativity (isn’t that noble?!). The collection is meant to trespass the geographical, political, psychological and ethnic borders in the name of Art with a capital A, coexistence and free expression of cultural diversity. The key concepts of Imago Mundi are democracy, equity between cultures and intercultural dialogue. “Don’t Ask Me Where I’m From”, their last exhibition which closed in February 2020, was organized in collaboration with the Aga Khan Museum in Toronto, which talked about art and post-migration, and has recently been nominated for the Global Fine Art Awards 2020.

Prophetically, the current exhibition hosted in the Gallerie delle Prigioni is called “When the Globe is Home“, curated by Claudio Scorretti and Irina Ungureanu, which had to change its trajectories due to the pandemic. Now it’s moved totally online and the artists in their studios give their impressions of the lockdown. Moreover, you can participate in completely free art workshops online (last Art Atelier was about conceptual art with Beya Gille Gacha) or a series of short 20 minutes talks with contemporary artists such as Kurdish Walid Siti or Icelandic Eirún Sigurðardóttir, Sigríður Þorgeirsdóttir, and Jóní Jónsdóttir (The Icelandic Love Corporation).