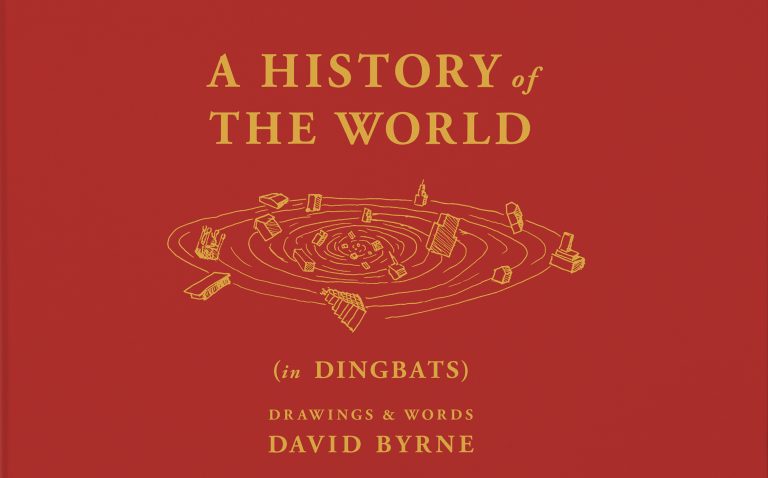 Front cover of A History of the World (in Dingbats) by David Byrne, 2022, published by Phaidon.

A History of the World (In Dingbats), David Byrne’s new book of illustrations, is a charming and hopeful look at the past, present, and possible future of humankind.

David Byrne is a busy man. Known predominately for his work in the band the Talking Heads, the septuagenarian artist has received recent acclaim for his Broadway show, the concert American Utopia. Byrne’s newest project is an exploration of yet another art form – illustration. His new book, A History of the World (In Dingbats) is equal parts irreverent and philosophical, a collection of doodles accompanied by thoughtful mini-essays. The book was created in collaboration with the designer and editor, Alex Kalman.

The dingbats first emerged as a pandemic project, as illustrations for the editors of Reasons to be Cheerful, a web magazine. Byrne was inspired by the illustrations used by typesetters in texts to “create visual breathing space”. His doodles are therefore part of an art historical tradition that goes back to early illuminated manuscripts. As he drew more and more dingbats, Byrne soon had a book on his hands, which he organized into a narrative that reflected his state of mind during the Covid-19 pandemic.

The book has been divided up into six parts and an epilogue; the parts bear quirky names like Fermentation and I can see Beyond the Swamp!. Each begins with a few pages of text followed by illustrations. Though there is a vague narrative imposed on the book through its division into parts, (humanity’s development throughout time), to the book’s benefit Byrne doesn’t cling too much to the structure. The effect is a freewheeling adventure through time through the deeply idiosyncratic perspective of David Byrne.

Major themes in A History of the World (In Dingbats) include technology, communities, and personal expression. Some of the essays feel ripped from the lyrics of a Talking Heads song: “the world beyond one’s house or apartment” instantly brings to mind the album, More Songs About Buildings and Food, for example. But that is not to say that Byrne is stuck in the past. Instead, his perspective feels lively and contemporary, preoccupied as it is with technology and Covid-19, and their effects on the world we live in.

Byrne’s doodles present a meeting of Art Brut and medieval marginalia. Black and white line drawings are full of tongue and cheek humor as well as clever titles. Covid Exam was my personal favorite, depicting two figures standing inside a human nose, a clever and accurate depiction of the invasive, painful procedure that has become our new normal. Humans create, evolve, and do a lot of thinking.

The book concludes with a hopeful reminder of the human capacity for change. Despite the endless grief of the pandemic, the stasis of lockdown offered some of us the opportunity to reflect and reassess.

A society that exists for all of us is imagined as a real possibility.

A History of the World (In Dingbats).

A History of the World (In Dingbats) urges a return to collectivism in this moment of intense division. With whimsy, empathy, and humor, Byrne and his dingbats offer us a much-needed balm for these difficult times.

A History of the World (In Dingbats) by David Byrne was recently published by Phaidon. Pick up a copy here.