The Vibrant Paintings of Henrietta Berk 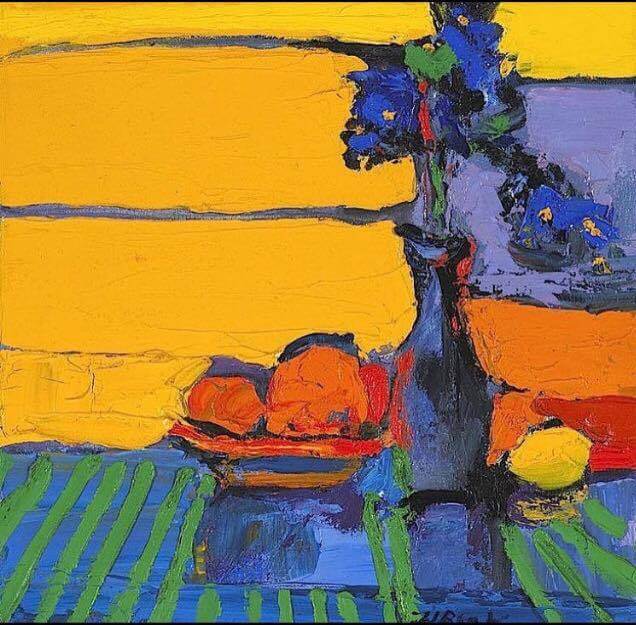 Born in Wichita, Kansas, Henrietta Berk (1919-1990) was known for painting in bold and bright colors. She moved to San Francisco with her family when she was very young. Berk studied at the San Francisco State College and the California College of Arts and Crafts, Oakland. Her paintings were very popular and one of them can be seen in the 1967 movie Guess Who’s Coming to Dinner which hangs in the U.S. Embassy in Peru.

Berk’s paintings were part of the Bay Area Figurative Movement, a term used for a group of artists located in the San Francisco Bay Area. The artists rejected the dominant style of Abstract Expressionism in favor of figure paintings in the 1950s to 1960s. The art movement was divided into three groups: the First Generation, the Bridge Generation, and the Second Generation. Berk was associated with the Bridge Generation.

Abstract painting gained popularity in the post Second World War era, promoted by the New York School. Named after an exhibition held at Oakland Museum of Art, 1957, the Bay Area Figurative Movement worked with a range of genres from local landscapes to portraits. They shared certain features with Abstract Expressionist styles, such as an ‘all over’ approach in which the whole canvas was treated equally. Also there was no concept of the center or margin, and colors acquired personal meanings.

The Bay Area Figurative Movement was seen as the first significant North American art movement based on the West Coast. It was a reaction to the traditional European abstraction which was centered in Paris and Berlin. The artists painted local landscapes, still lifes, architecture, seascapes, and cityscapes of the San Francisco Bay Area. As a result of their shared interests, the artists developed a stylistic vocabulary and received significant recognition for their works. The Bay Area Figurative Movement was also associated with the rise of beat culture and West Coast jazz in San Francisco.

In Green Hills, Berk used different shades of green for the landscape of the Bay Area. The paint is applied with thick and bold brushstrokes. The loosely applied color gives an impression of hills in the foreground. The horizon is painted with a bold line of bright green and the sky is painted in dull yellow. Berk used a limited color palette for Green Hills, a feature seen in her other paintings.

The Landscape is another depiction of the Bay Area. The canvas is drenched in bold and bright colors. This is probably a scene of the sunset when the sky and land are bathed in bright orange. In the foreground are huge rocks that appear to be an ideal viewing point for the sunset. In the center of the painting is a small lake which is reflecting the bright orange sky above. The distant hills are in purple and slowly darkness will engulf the whole area. Berk captured the vivid sunsets of the Bay Area and its rugged landscape.

California Vineyard is an abstract depiction of the vineyards in the Bay Area. The painting is a riot of colors which gives the spectator a lot to see. The bold blues of the sky stand out against the lush green in the foreground. The brown-orange color suggests the vineyards being prepared for plantations. Like Green Hills, Berk gives a birds-eye view of the landscape.

Later, the Bay Area artists gradually reintroduced human figures into their works, and Berk was one of them. The Picnic portrays a young couple enjoying leisure time on the beach. It is a sunny and warm day and the sun has illuminated the sand and the sea. The couple had planned this day as shown by the various objects around them. Their backs are turned towards the sea and they are in deep conversation. The two figures in the center of the painting are as important as the sea in the background. Berk applied thick colors for the sea and for the human figures. Their facial expressions and other finer details are compromised to capture the mood of the painting.

Seated Woman portrays a woman in an armchair. She is resting her head in her left hand and sits in a poised manner. She is dressed fashionably and her hair is tied up. Also there is a vase of flowers on a coffee table in front of her. As with her other works, Berk does not paint details such as human features or expressions. Even though the woman appears comfortable, her pose is tense. She seems to be staring at the flower vase and engulfed in deep thought. The paint is applied thickly and Berk used contrasting colors. The ‘loud’ orange and yellow balance the stillness of the woman’s pose.

The Musician is a portrait of a male figure in which Berk focused on the profile. Again the paint is applied thickly and in quick brushstrokes. The face and the head occupy a large part of the canvas. The painting does not depict a musical instrument or any reference to music. However, the painting is a non-traditional portrait of a man in which he is at the center and his setting is secondary.

The Children is a tribute to childhood and springtime. This painting depicts two children running across a field of spring wildflowers. Furthermore it captures the dynamism of youth and nature. The children appear to run towards the spectator, their hair and the grass flowing in the wind. It is a perfectly clear and sunny day to be outdoors!

Beach Sunset depicts three children in the foreground and a few people in the background. Beaches are perfect places to see sunsets when the sea and sky mirror the colors. Berk used bold pinks, oranges, and blues to depict the sunset. The children are holding each other’s hands and jumping in excitement. This vibrant painting is full of the energy of excited children. The painting captures a fleeting moment; the sun has dipped behind the sea, the sky is a rich canvas, and soon everything will be dark as night descends.

Summer Afternoon is a portrait of a woman sitting on a chair. She has a relaxed pose with one arm resting on the back of the chair. The background is a cluster of tall trees or a forest. The afternoon sun is brightly reflecting on the grass. Two columns frame the woman, giving a sense of entrapment. She is neither completely indoors nor outdoors. Perhaps Berk was portraying the situation of women during her time, the conflict between personal ambitions and social obligations.

The Flower Seller depicts a woman in the outdoors. However this does not appear to be a conventional marketplace. There are trees in the background and no other figures beside the woman. She is selling potted flowers that sit both in the foreground and behind the woman. She appears to be holding a teacup in her hands and there is also a small side table with a vase of flowers. The woman seems comfortable in this public place and waiting for the customers.

Still Life With Flowers depicts a vase of flowers in an interesting shape. It is a thin elongated vase with fresh flowers. The paint is applied quickly and thickly. In some places, Berk has applied colors straight from the paint tubes. The flower vase divides the background into two parts: light and dark.

Despite being a well-known artist of the Bay Area Movement, Berk remains an elusive artist. Most of her paintings are part of private collections, which suggest her popularity with art lovers. The Steven Stern Fine Arts Gallery started The Henrietta Berk Research Project with the aim of exhibiting the artist’s paintings and brought out a book authored by Deborah Solon entitled, In Living Color, The Art & Life of Henrietta Berk.