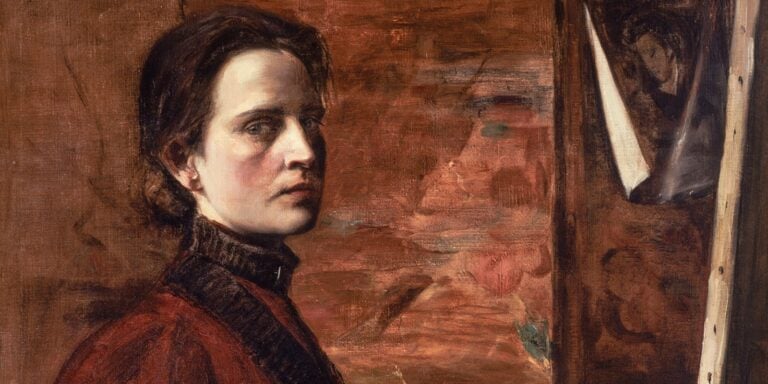 Elizabeth Nourse was an exceptional woman and artist. Born in Cincinnati, have spent her career as an expatriate in Paris, earning accolades at the French art salons. The art world was not so open to women at that time so for her whole life he had to fight for the acclamation. She made that happen – her works were highly popular in Paris and in USA, she was one of the first American women to be elected a member of Société Nationale des Beaux-Arts, and she won many awards in the international expositions of the time. She was consistently invited to enter the annual juried exhibitions that were a prominent feature of the American art scene. As a final accolade, the French government bought her painting Les volets clos for its permanent collection of contemporary art to hang in the Musée du Luxembourg with the work of such artists as James Abbott McNeill Whistler, Winslow Homer, and John Singer Sargent.

And it was local sculptor Clement Barnhorn who called Nourse “unquestionably the premier woman artiste of America.”

Elizabeth and her twin sister Adelaide were born in 1859 in Mount Healthy, the youngest of 10 children. Money was tight, so all of the family had to work. At age 14, the twins attended McMicken School of Design, then part of the University of Cincinnati (it later became the Art Academy of Cincinnati), with free tuition. Adelaide preferred carving, while Elizabeth studied it all – drawing, painting, carving, sculpture.

Nourse graduated from the School of Design in 1881 and was offered a position teaching drawing, but she wished to be a painter and continue her studies.

In 1887, 28-year-old Elizabeth, accompanied by her older sister, Louise, went to study at the Academie Julian in Paris. After three months, she was told she needed no more instruction. She began a series of trips throughout Europe, Russia, and North Africa in 1889 where she found diverse subjects to paint. She primarily painted empathetic images of peasant women engaged in ordinary activities such as tending to housework and nursing babies. Although she enjoyed painting the folk traditions of different cultures, she also accepted commissions for portraits in order to support her sister and herself.

Nourse had to prove she was a serious artist. Many women artists got married and stopped creating, or became teachers. Also impressing all-male juries of the exhibitions and Salons was a challenge. With Mary Cassatt and Cecilia Beaux, she was one of the few women painters to achieve international recognition for her work and, like them, faced certain obstacles that a male artist did not encounter.

The artist submitted her painting “La mère” (The Mother) to the Paris Salon, in 1888. The jury accepted the piece and hung it “on the line” at eye-level, a very good position for an unknown artist.

Nourse was a realist painter. Her subjects were often French peasants, rural working women and women with young children, depicted as they really were. Her work was sensitive, but not sentimental. She would include the coarse, red hands of a mother set against the creamy skin tones of a baby. Although her works were often compared to Mary Cassatt, she never stopped painting lower classes.

When it was suggested that she paint more attractive subjects that would be easier to sell, Nourse replied, “How can I paint what does not appeal to me?”

Later Nourse became just the second woman selected as a member of the Société Nationale des Beaux-Arts, the New Salon.

In 1920, Nourse underwent surgery for breast cancer. She continued painting and exhibiting internationally until she retired in 1924. During her career she maintained a more traditional style, dismissing popular movements like Impressionism as passing trends. Nourse died in Paris in 1938 and unfortunately, her work was largely forgotten. In the 20th century, the rediscovery of Nourse led to a retrospective exhibit of her work at the Smithsonian in Washington, DC, and at the Cincinnati Art Museum in 1983.