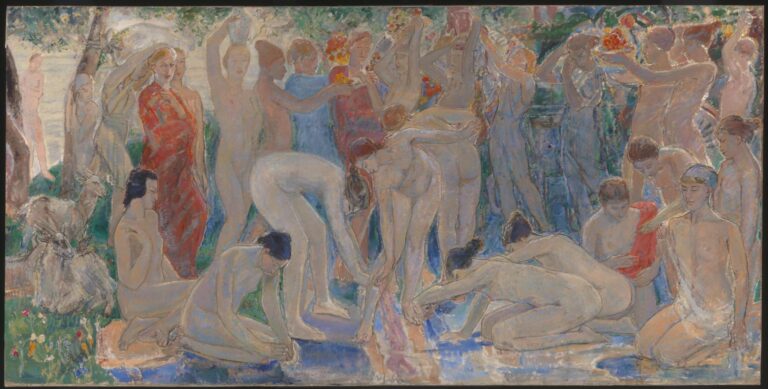 Summer is on her way out the door, signalled by darker nights and chilly mornings. But before we bid her farewell, let’s take a look at one more beach painting. The image above is Decoration: The Excursion of Nausicaa by Dame Ethel Walker.

“The biggest Sapphic beach party in Western art” is how art writer Alex Pilcher describes it! The huge 6 foot by 12 foot painting tells the story of Nausicaa, a key figure in Homer’s Odyssey. Nausicaa brings her hand maidens down to the river estuary to picnic, play and wash laundry. There they find the ship-wrecked Odysseus. In most paintings of this scene, heroic Odysseus takes centre stage, aided and worshipped by young nymphs. But here he is a background note. This is primarily a painting of women, by a woman, celebrating the female form.

The graphite, ink and watercolour image above (The Bathers) is fascinating. There are sections where the surface of the paper has been torn away to create texture (look at where the sea breaks on the shore). And on the left, two figures on a separate piece of paper have been added to the group of nude bathers.

Born in 1861 in Edinburgh, Scotland, Ethel Walker’s paintings were Impressionistic in style. Walker is best known for her studies of women – both figure studies and portraits. In these she seems to capture perfectly the mood and temperament of the sitter. She met the artist Clara Christian when she was just 19, and the two lived, studied and worked together.

Walker famously painted a portrait of the young Barbara Hepworth, who went on to become one of the most famous sculptors in the world.

She also painted Vanessa Bell, one of the Bloomsbury set.

In her recent novel Winter, Ali Smith mentions Ethel Walker. She says “she was a painter of landscapes and portraits so renowned that there’s practically no municipal collection in the United Kingdom that doesn’t have something by her in it.”

How is it that an artist of such talent, with such a wealth of paintings produced, is virtually unheard of? Well, we know, don’t we? It’s because she was a woman. And she painted women in a gentle and sensitive way. Oh, and she was a lesbian too. All clearly rattled the fine sensibilities of the male art history club.

However she did receive recognition in some ways - in 1938 she was made a CBE and in 1943 she became a Dame. Ethel Walker died in 1951 in London, but she left us a fine collection of intimate and moving portraits of women. Something I for one will continue to celebrate.