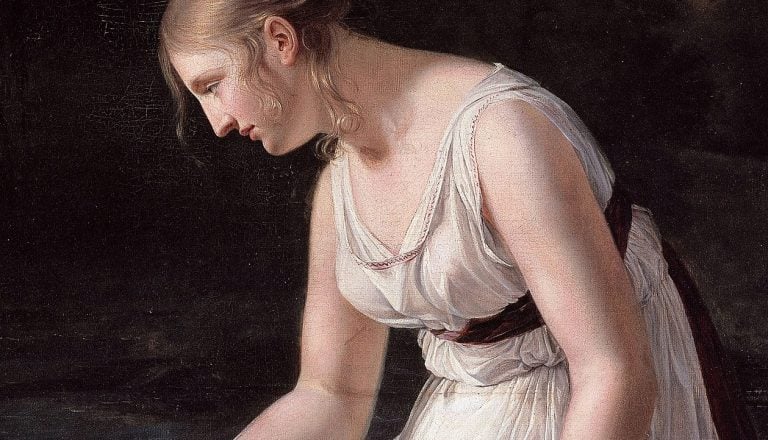 Constance Marie Charpentier (1767-1849) was a French painter. You have never heard of her? That’s nothing weird, she is one of the plenty of female artists erased in art history. Here is one of her works, stunning Melancholy.

Constance Marie Charpentier, also known as Constance Marie Blondelu (she changed her name upon marriage), was a trained painter. The details are unclear, but she is typically believed to have studied with the acclaimed French painter Jacques-Louis David, but may also have been a pupil of François Gérard, Pierre Bouillon, Louis Lafitte, and either Johann Georg Wille or his son, Pierre-Alexandre Wille.

Regarding Jacques-Louis David – it is believed that some of Charpentier’s works were incorrectly attributed to him. But it is a very typical situation for this epoch. For example, the well-known painting Young Woman Drawing (1801) was incorrectly attributed first to David, then from the 1950s to Charpentier, and is now believed to be the work of Marie-Denise Villers. Whoever painted this work of art, it is still one of the most popular and most enthralling paintings in the Metropolitan Museum of Art. And it’s proof, that great pieces created by female artists were incorrectly attributed to their famous teachers.

P.S. You can admire this beautiful work on the cover of DailyArt’s Women Artists Notebook!

Based on surviving, positively identified works by Charpentier, she is considered one of the finest portrait painters of her era. But she was also specialized in genre scenes.

In 1798, her pendant paintings Widow of a Day and Widow of a Year earned a Prix d’encouragement, a commission for a painting to be purchased by the state for 1,500 francs. From 1795 to 1819, she exhibited approximately 30 paintings at various Salons, winning a gold medal in 1814 at the Paris Salon and a silver medal in 1821 at the Salon at Douai. She was a star!

It’s very hard to find her works on the internet. Only Melancholy pops up with ease – Charpentier’s only known history painting, fulfilled this commission, and its appearance at the 1801 Salon prompted an admiring poet to declare: “this painting lets us discover / Charm in melancholy.”

Although she ceased to exhibit after 1821, she was still teaching 10 years later when a dictionary of artists announced that she “receives, three times a week, young women who wish to follow her advice on drawing and painting” at her residence on the rue du Pot de fer Saint-Sulpice (part of the modern-day rue Bonaparte, in the sixth arrondissement of Paris).

If you know in which museums we can find her works, please let us know in the comments – this article deserves many more of her works!