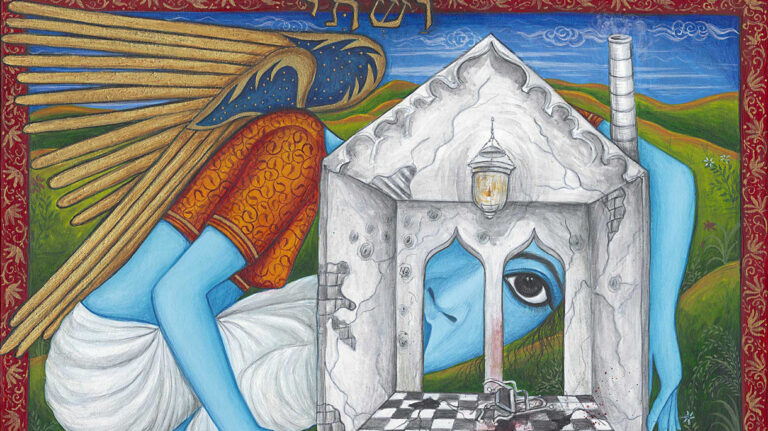 From February 25th to May 31st, 2020 the Gotthelf Art Gallery at the San Diego Center for Jewish Culture will exhibit the unique works of the Indian artist Siona Benjamin. She is now based in New Jersey (Exhibition details below). Benjamin's works reflect a combination of Indian and Sephardic iconography. They represent her unique upbringing as a member of the Bene Israel community in India, as well as imagery from her life in the United States.

Benjamin belongs to the Bene Israel community of India. She grew up in a city that was predominantly Hindu and Muslim, and to a lesser extent, Catholic and Zoroastrian. She has two Masters of Fine Arts, one in painting and one in theater set design. Furthermore, she has exhibited in the US, Canada, Europe, India, and Asia.

In 2010 she received a Fulbright Fellowship for an art project entitled ‘Faces: Weaving Indian Jewish Narratives’. She was later awarded a second Fulbright Fellowship in 2016 for a project entitled ‘Motherland to Fatherland: Indian Transcultural Jews in Israel’. The documentary “Blue Like Me” follows her journey as she conducted research for this project. Her unique perspective as a Jewish woman raised in India is a central theme to her artworks.

The Bene Israel are the largest of the three Jewish communities in India. It is believed that they were shipwrecked near Western India either in the 8th century BCE while fleeing religious persecution under the Assyrians, or 600 years later while fleeing Antiochus IV Epiphanes. Some have also theorized that they were shipwrecked near Alibaug around the 1st century CE while on a trading voyage to the Far East.

Though most aboard drowned, a few swam to safety and found refuge among the local population of the Konkan coast. They felt welcome in their new home and have since lived in harmony with the local population. The Jewish population in India has not suffered from the anti-Semitism that is rampant in many other parts of the world.

Over time the Bene Israel community assimilated in Western India. They continued to observe Jewish traditions but also adopted the culture, clothing style, food, and even wedding rituals of their new home. However, in 1948 the majority of the Bene Israeli population of about 20,000 migrated to Israel. Consequently only around 5000 chose to remain in India.

Hence Benjamin’s works are an exploration of her unique heritage. They reflect the complexity of her identity as well as her own search for a spiritual home.

Tapestry of a Multicultural Identity

Benjamin's paintings draw from classical traditions of both the East and the West. They therefore attempt to bridge the gap between these diverse artistic worlds. Her works are a blend of Mughal and Persian miniatures, Christian and Jewish illuminated manuscripts, and mythology. Along with traditional elements are hints of Bollywood films and comic books, as well as contemporary pop art. As a result her unique imagery transcends cultures, religions, and nations.

These paintings depict cryptic figures from both Jewish and Hindu mythology in idyllic and almost spiritual settings. For example, her figures are usually set in the ornate borders that are typically seen in Mughal and Persian miniatures. The human figures are very often female characters from mythology, but recast as feminist icons. She also boldly presents her female figures, which counters many of the traditions from which they originate. These artworks are shrouded in mystery and opposing dichotomies. The figures are portrayed carrying weapons while asking for peace, or swearing vengeance while begging for mercy.

Benjamin also uses blue as the skin color for the subjects of her artworks. This is interesting because blue is most frequently associated with the male Hindu Gods (Vishnu and Shiva). However, to Benjamin, the blue skin color is a symbol of being “the other”. The light blue color represents the sky, the ocean, and even the planet itself. Thus it symbolizes belonging both everywhere and nowhere at the same time.