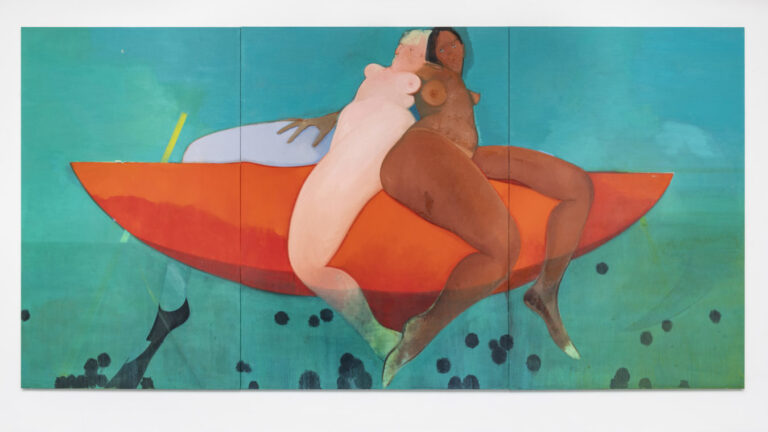 For Condo London 2020, Pilar Corrias shares its space with Matthew Brown Gallery, LA. Whilst works by Sedrick Chisom largely occupy the downstairs space, the viewer firstly enters a fictional island of desire and pleasure in Sofia Mitsola’s Darladiladada. Taking its title from a traditional Greek song sung by sponge divers as they travelled the seas, the exhibition finds its roots in Greek culture and thus Mitsola’s heritage. The fantasy setting borrows inspiration from the artist’s own experiences of the Greek islands as well as her writing, and invites the viewer to get lost in the depths of the female form.

Whilst the show is peppered with three small-scale canvases, the majority of Mitsola’s women are big. With four of the works on show considerably larger than human-scale, they dominate the white cube space in both size and presence. The works act in dialogue with the viewer through their direct eye contact and, whilst all women in the works differ in appearance, they play the same game on various levels; some confrontational, others flirtatious, all of these characters elicit a personal encounter with the viewer through their subversion of the male gaze.

Some works, such as The Urchin Cruncher and Balona, almost create the impression as if we have walked in on them. An expression of surprise and acknowledgement at once flickering in their eyes, as if to say ‘oh, it’s you again’, the viewer is well aware that we are infringing on the figure’s space, opening a door to their world and poking our heads around the corner. The Urchin Cruncher lays on her side across three different moments in movement; three of her faces are depicted as she raises her weary head to meet the viewer, with her expression progressing from idleness, to shock – the only face of the three to be marked by a small, gaping mouth - to detached observation as she mutedly stares at the intruder. A salmon-coloured body sprawled across a yellow surface, she appears to sunbathe on the island’s sand as the flat blue of the ocean encircles her. In her splayed fingers is a black sea urchin, its spines overlapping her fingers although she exhibits no discomfort of a sting. The beady-eyed woman is subtly in control, subverting a poisonous sea creature into a plaything which she holds between her languid but strong fingers.

A similar physical strength is implied in Balona as a woman swims through the depths of the ocean. Incorporating two flat blue tones to form the depths, she wades through the azure expanse and dispels teal waves around her in the process. The character is robust with muscley pink thighs, big feet which resemble flippers, and powerful arms propelling her forward. She turns her head towards us mid-breaststroke, peering at us over her shoulder as she leads the way; positioned behind this woman, we are dared to keep up with her as she continues to push onwards. Much as The Urchin Cruncher is in control, toying with the spikes of the sea urchin, the female in Balona is driving the image, although this time through the forward direction of her movement and the passive perspective that we view her from.

The viewer’s perspective is also the key feature which makes Soft so stark, as a one-shoed, red-faced woman lies on her back and looks down at us with little piercing eyes; positioned almost as though we are between her legs, she reclines with no sign of embarrassment on her face. Soft is confrontational, daring the viewer to keep looking at her whilst overpowering them in her magnitude, fixed stare and intrusive viewpoint. The woman looks down at the viewer, initiating the game; whilst we may have felt like the sure-fire winner initially, considering her submissive position and complete exposure, her impenetrable stare is a powerful weapon, puncturing our objectification of her as we are held in her gaze.

Whilst Soft’s raw directness can make the viewer feel uncomfortable, Mitsola’s largest, titular work is of a more mystic, seductive nature. Depicting multiple female figures, two women occupy the central canvas of the huge triptych as the most coercive embodiment of the show’s themes. Much as their position in the triptych, these two women are at the centre of Mitsola’s imagined world, merging the distinctly fixated gaze and naked femininity with a subversive power and possession. Similarly to the other works, both women stare at the viewer – one straddling the canoe as the other leans on her and rolls her eyes towards us; their feet dangling in the cool tones of the ocean, the solid lines of their curved bodies cut through their bold surroundings and add a heightened aura of sensuality that is ever-present in the show. With her face slightly buried in the other’s hair, the blonde figure seems to whisper to her companion. Both pairs of eyes fixed on the viewer, the female presence is strong as these siren-like women consider you as their next victim. A mutual fascination, the women marvel the viewer with as much intent as the viewer marvels them.

Walking the line between passively observing the female characters and actively being engaged by them, the viewer’s ultimate position is debatable. There is an undeniable sense of intimacy in the complicated relationships formed, as the artist exposes her women whilst arming them with subtle indicators of power; their individual actions, presence and environments intertwine to make Mitsola’s fantasy setting a place of greater female liberty than may initially be perceived. As we leave the intriguing island and its inhabitants, remembering their faces and the vivid colours that surrounded them, we are left to ponder their stories as if we were sponge divers singing Darladiladada as we travel.

Sofia Mitsola: Darladiladada is at Pilar Corrias, London, from 11 January – 8 February 2020. Take the last chance to see it this weekend!