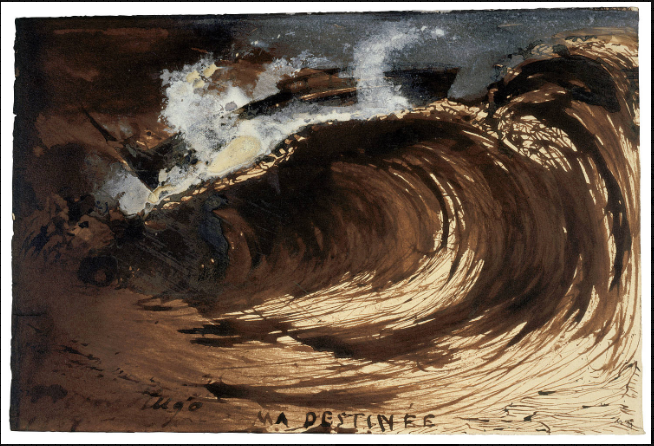 French author, poet, and dramatist Victor Hugo is known worldwide for his written work, namely novels such as Les Misérables and The Hunchback of Notre Dame. Unbeknownst to many, though, Hugo was also quite the visual artist, producing over 3,000 ink drawings in his lifetime in a style that pre-dates later modernist and abstract movements. Now, it seems the world is finally shedding light on the author’s hidden talent with an exhibition at UCLA’s Hammer Museum entitled Stones to Stains: The Drawings of Victor Hugo, showing 75 of Hugo’s “experimental and enigmatic” works. 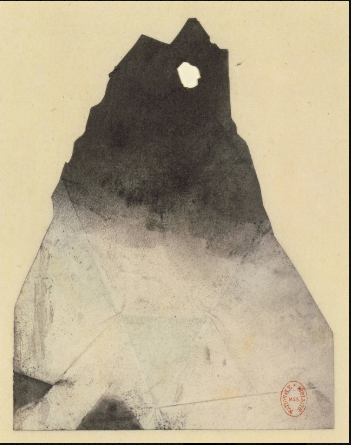 Victor Hugo, Silhouette de l'Ermitage (Silhouette of l’Ermitage), ca. 1855, Bibliothèque nationale de France[/caption] Born in 1802, Hugo was a writer from the outset, publishing his first novel at 21 and a collection of poetry even earlier. According to Art & Antiques magazine, Hugo drew and painted throughout his life, but produced particularly large amounts of visual work between 1848 and 1853, as well as during his time as a political exile on the islands of Guernsey and Jersey from 1852 to 1870. The style of these ink drawings contrasts his writing style – where his novels feature intricately woven plotlines, large casts of characters, and sociopolitical commentary, his artworks are spontaneous, fluid, and abstract, inspired by Spiritualism and the natural world, not politics. [caption id="attachment_18365" align="aligncenter" width="545"] 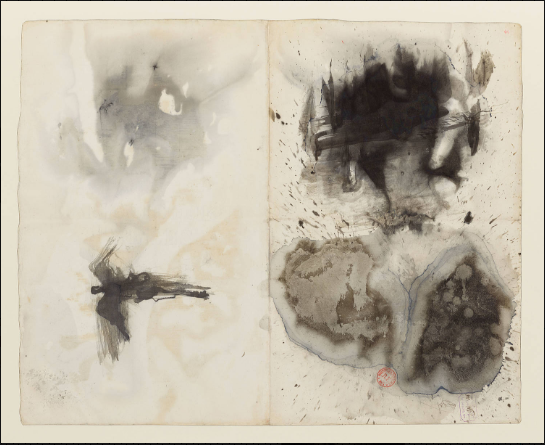 Victor Hugo,  Taches (Stains), ca. 1875, Bibliothèque nationale de France[/caption] This fluidity is a result of Hugo’s extremely experimental creative process, wherein he allowed water and ink to flow and pool naturally, and used various found materials, such as fingerprints, lace, leaves, and self-made stencils, to create texture. Through these techniques, Hugo’s works are simultaneously recognizable forms and abstract shapes. It is for this reason that the Los Angeles Times actually suggests Hugo as a possible inventor of abstract art. [caption id="attachment_18366" align="aligncenter" width="301"] 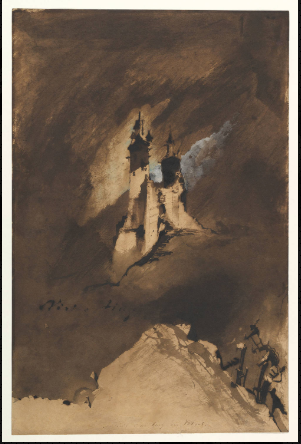 Victor Hugo, Souvenir d’un burg des Vosges (Souvenir of a castle in the Vosges), 1857, Metropolitan Museum of Art[/caption] Although the styles of his visual and written works differed, they are similar in tone – gloomy, brooding, and stormy. It’s not hard to imagine that the same man who depicted the hardships of the French Revolution and the loneliness of an outcast, also created images of dark castles, jagged cliffs, and crashing waves. The author also painted “taches” or stains, made by layering washes of black and brown ink. Although decidedly more abstract, these pieces are equally as shadowy as his other works. None of Hugo’s artworks was ever exhibited during his lifetime – he shared them only with family and friends – and this is only his second solo exhibition. These pieces, however, are just as intriguing and mysterious as the novels that made him famous.