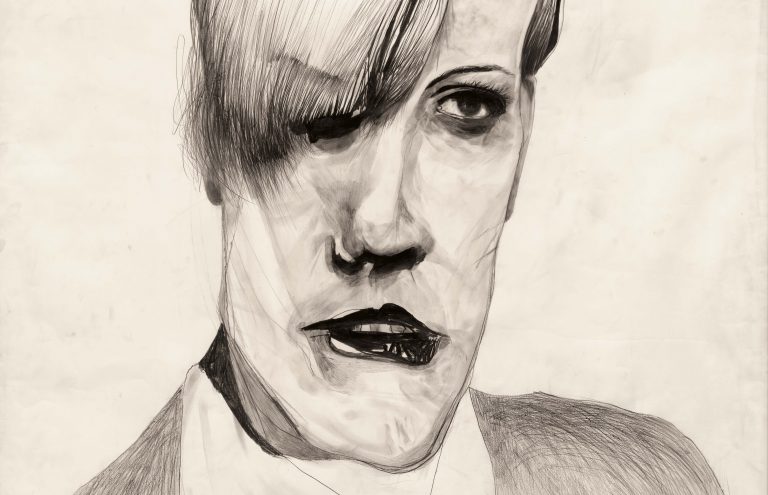 Until October 30, 2022, the Museum für Moderne Kunst in Frankfurt is hosting an exhibition dedicated to Stéphane Mandelbaum (1961–1986). During the last 10 years of his life, this Belgian painter and draughtsman produced an atypical, provocative, and violent body of work. A precocious talent, carried by his influences, he tirelessly questioned and drew on his Jewish origins, sexuality, and violence. He staged his life and his obsessions, between fantasy and reality, sincerity and mythomania.

The Iconic Power of Stéphane Mandelbaum

The exhibition begins with a huge portrait, the same one that can be found on the posters that adorn the streets of Frankfurt. In fact, it is an acquisition of the MMK. An image that imposes itself, an affirmation of the artist’s power. The look of this character, the threatening mystery in the right eye, the twisting lips, the tension in the jaw: these elements are all amplified by the large format. From the beginning, we know that this exhibition will take us out of our comfort zone but that we can expect an aesthetic adventure.

The Centre Pompidou in Paris is also aware of the strength of Mandelbaum’s work. Indeed, they acquired one of his drawings. It is a portrait of Goebbels, minister of propaganda of the Third Reich. The white cloud coming out of the Nazi minister’s mouth contributes to the threatening mystery of the image. Actually, it’s an accident. This drawing has been exhibited at the art school of Mandelbaum. As a joke, a student had written “Job j’ai soif!” (Job I’m thirsty!) on the drawing. To hide it, Mandelbaum has simply covered it with white. The accident became part of the work.

Stéphane Mandelbaum was born in 1961. He grew up in an artistic environment. His father was a painter of Jewish origin and his mother was an illustrator with Armenian roots. It is understandable why he showed an early talent for drawing. At the age of 9, his drawings were exhibited in a cultural venue. Two years later, suffering from dyslexia, he entered an alternative school. As a consequence, phonetic writing abounded in his creations.

His adolescence was a formative period. He entered an art school and took live model classes with the painter Lucien Braet. Immediately, this teacher became aware of the talent of his student. Thus, he did not hesitate to put these drawings forward during exhibitions at the school (see The Death of the Pope below). During this time, Mandelbaum also created some paintings, such as the one with the broken face (see also below).

Living in nearby Brussels, Stéphane Mandelbaum regularly visited slaughterhouses with a friend. They loved Chaïm Soutine. Did they contemplate the carcasses while thinking of his flayed beef? The Royal Museum of Fine Arts in Brussels was also one of their favorite places. It was there that they admired The Death of Marat by Jacques-Louis David. In the Netherlands, they have seen the works of Van Gogh and Rembrandt.

Mandelbaum also went to Paris (where he saw Apocalypse Now) and Italy. In Ostia, he wanted to sleep on the beach where Paolo Pasolini was murdered. Indeed, like other young people, he loved transgressive figures such as Pasolini, but also Arthur Rimbaud and Francis Bacon. He really loved the movie called In the realm of the senses. He drew them again and again. In 1979, he started engraving and produced about 20 works. In his early 20s, he was already kind of recognized. He participated in exhibitions and was represented in galleries. 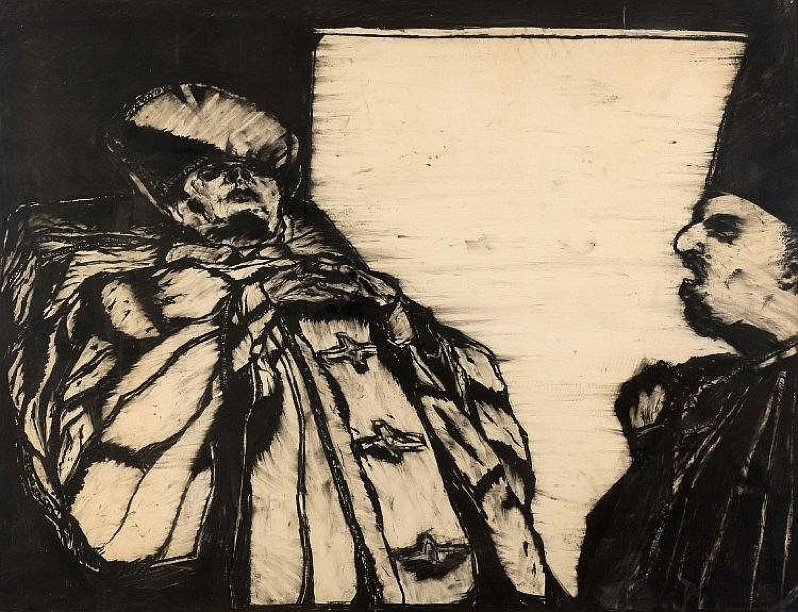 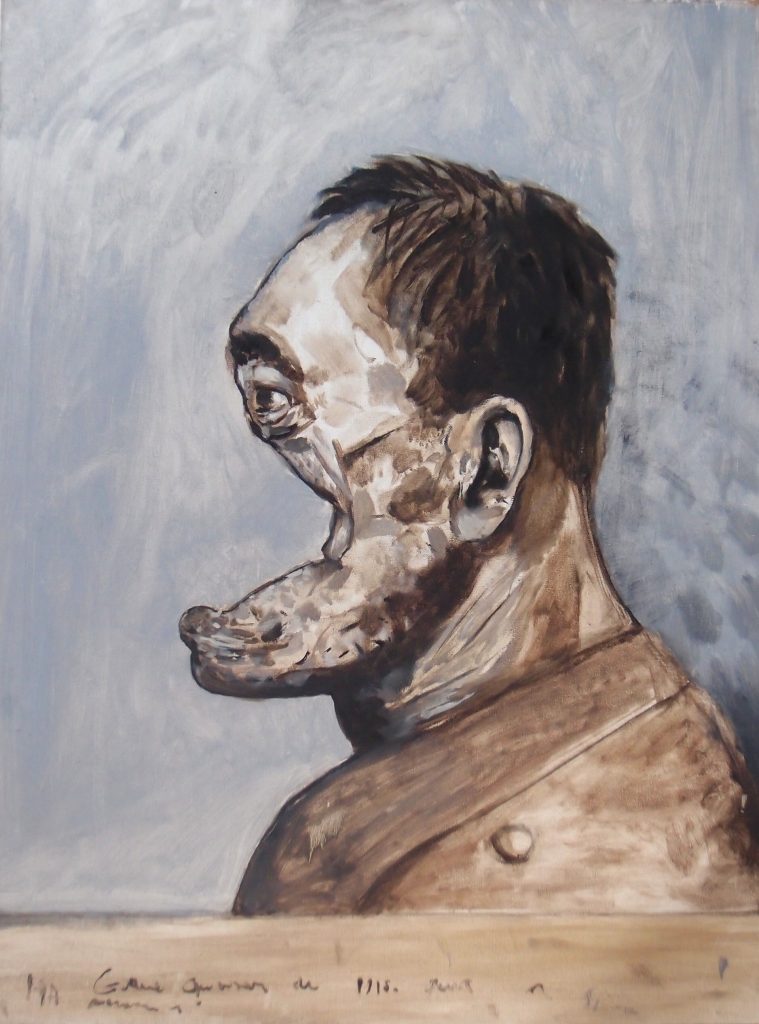 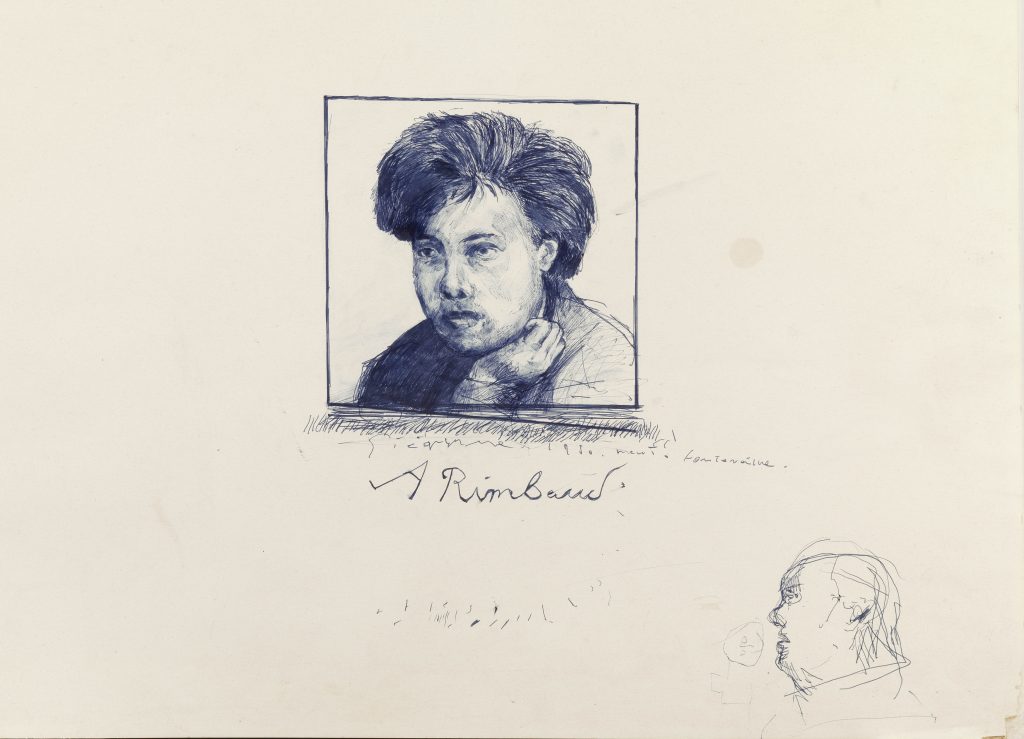 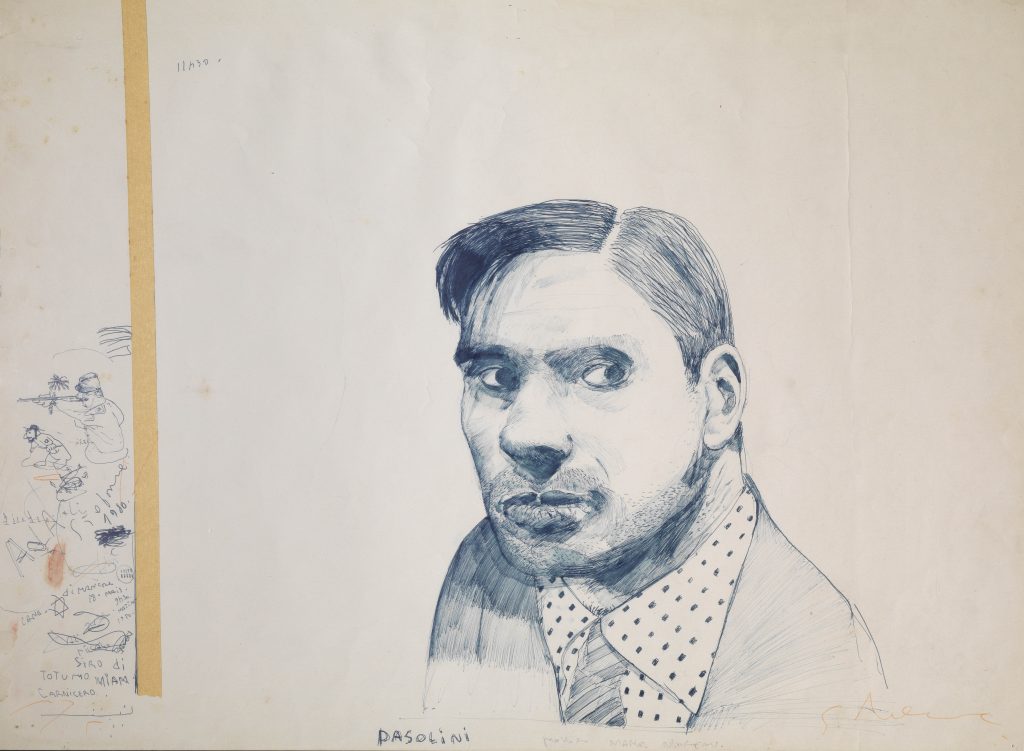 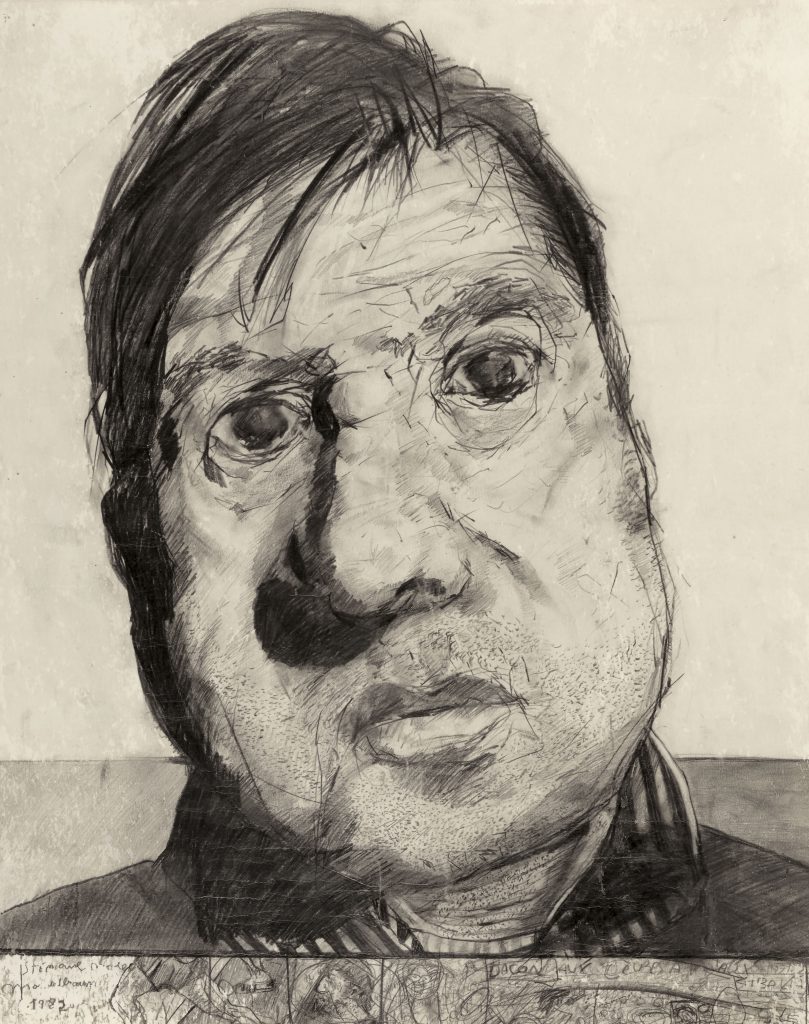 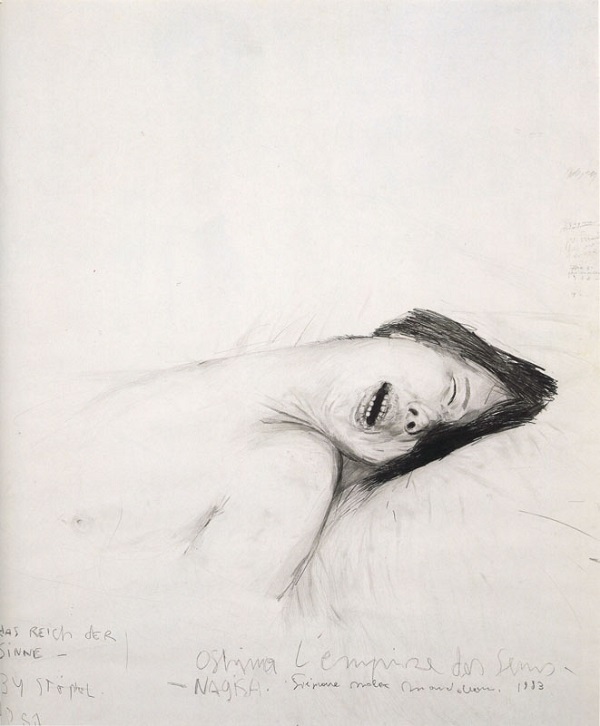 One of the Mandelbaum’s painting exhibited during his teenage time.

One of the rare oil painting of Mandelbaum.

The poet Arthur Rimbaud was part of Mandelbaum’s pantheon.

The works and personnality of Francis Bacon had a huge influence on Mandelbaum.

In the realm of the senses by Stéphane Mandelbaum

The movie “In the realm of the senses” had a strong effect on Mandelbaum.

Stéphane Mandelbaum’s style is difficult to describe. Some say that he is situated between Art Brut and Neo-Expressionism, somewhere in the shadow of Francis Bacon. He often created drawings unbalanced with erasures, stains, and scrambled writings in the margin. It was as if he refused to let his talent shine too brightly. He sabotaged the beauty that was too easily accessible.

His art reveals a deep internal tension. He was an accomplished artist, he was curious and knowledgeable about art. He was a compulsive creator. He gave the impression of being driven to draw in spite of himself. His notes and other drawings looked like they were scribbled in a hurry. He drew every day, no matter what kind of support he could find for his works. Sometimes the drawing remained simplistic, sometimes more elaborate figuration appeared. In any case, the space is always full, almost cluttered.

His neighbor, Gérard Preszow, a friend of Mandelbaum’s father, asked him to put his drawings in front of his door, and he did it every day until the death of the neighbor. Preszow was working on creating an Art Brut gallery. While immersed in the writings of Dubuffet, he realized that Mandelbaum was a raw creator in his own way. His drawings seem to emerge spontaneously, dictated by his obsessions. In the last years of his life, he worked only with a BIC pen, as if it was the only technique that matched his inner urgency. 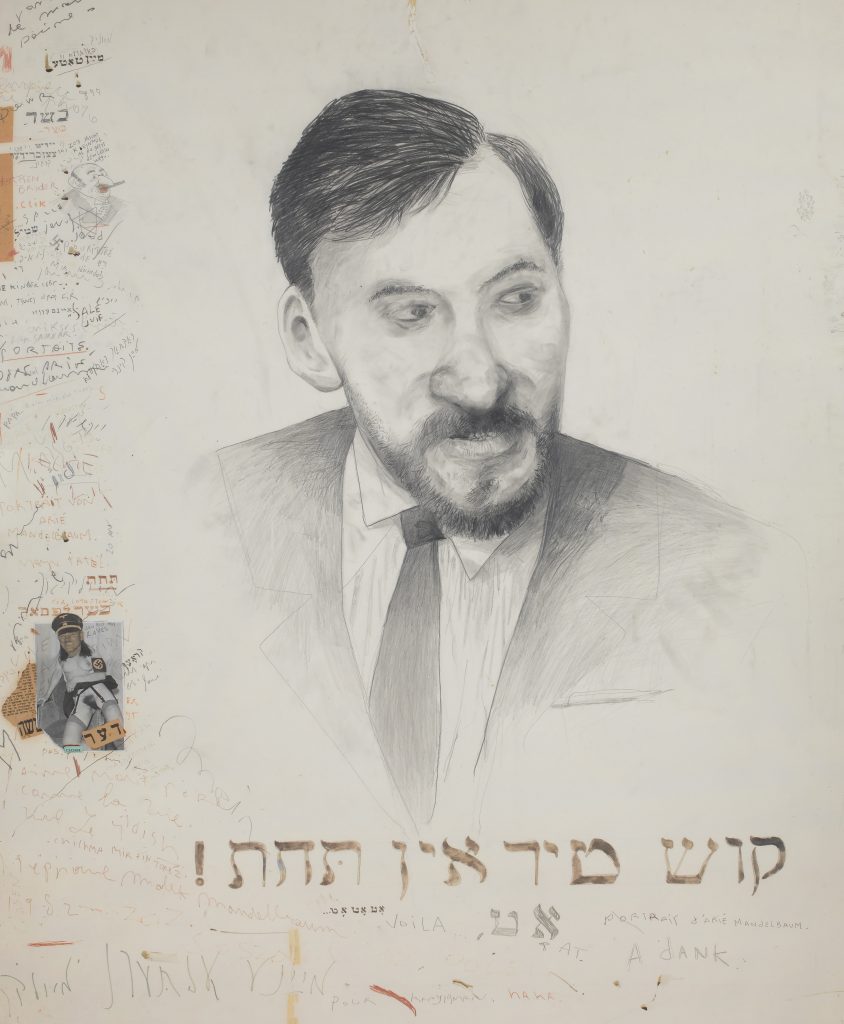 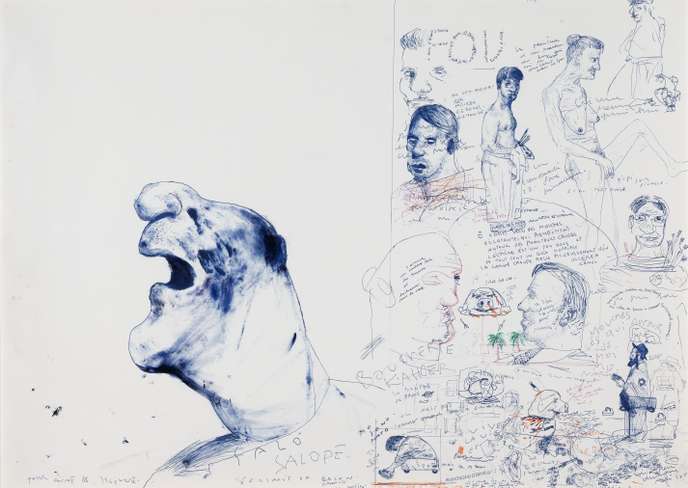 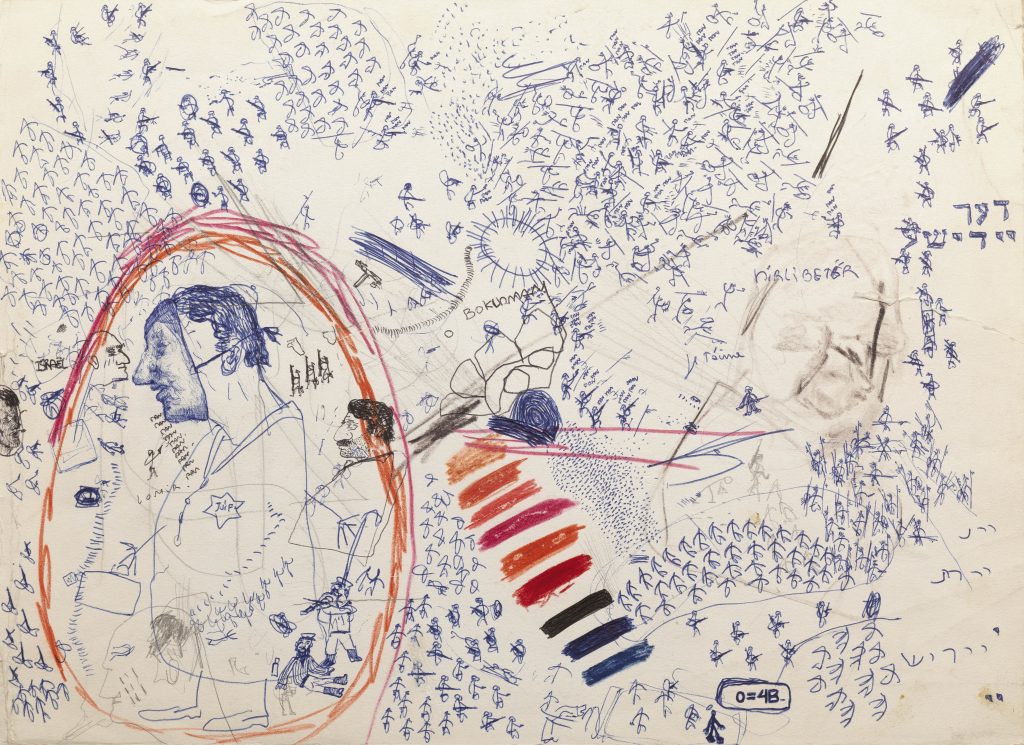 Portrait of Mandelbaum’s father (who was a painter and an art teacher).

Another work inspired by Francis Bacon, one of the main figure of Mandelbaum’s pantheon.

An improvised composition of Mandelbaum, the kind he did everyday.

One of the many large format portraits made by the artist.

A Hazardous Quest to Find Himself

Stéphane Mandelbaum was interested in his Jewish origins. He learned Yiddish and listened to traditional music while drawing. This is probably what led him to one of his other obsessions: Nazi dignitaries. He had seen Claude Lanzmann’s film Shoah several times and also owned the book of transcripts of the survivors’ testimonies. One of his friends assumed that, like others of his generation, he was torn by the guilt of not having been able to do anything to prevent the worst. Is this what drove him to stage these figures of the Third Reich? To arrogate to himself the power to do what he wants with them? To ridicule them by immortalizing them in an art form that they would have qualified as “degenerate“? Is it an attempt to appropriate an irresolvable past through a gesture of provocation?

In this context, we understand why Mandelbaum identified with Pierre Goldman. He also drew him relentlessly. Goldman was a Jewish intellectual who went from the extreme left to organized crime and who ended up being mysteriously murdered. A biography that echoes that of the young artist. His quest for identity is also coupled with a search for intensity. He had the will to make his life an eventful novel. His extreme nature pushed him to consider each moment as a potential adrenaline shot. That’s why he was fascinated by the underworld: the shady bars and their fauna of pimps and traffickers. Thus, the subjects of his drawings reflect his new interests: shady bars, prostitutes, and guns. Stéphane Mandelbaum wished to be a figure of transgression, and the new path he had chosen to reach his goal would be the last one. 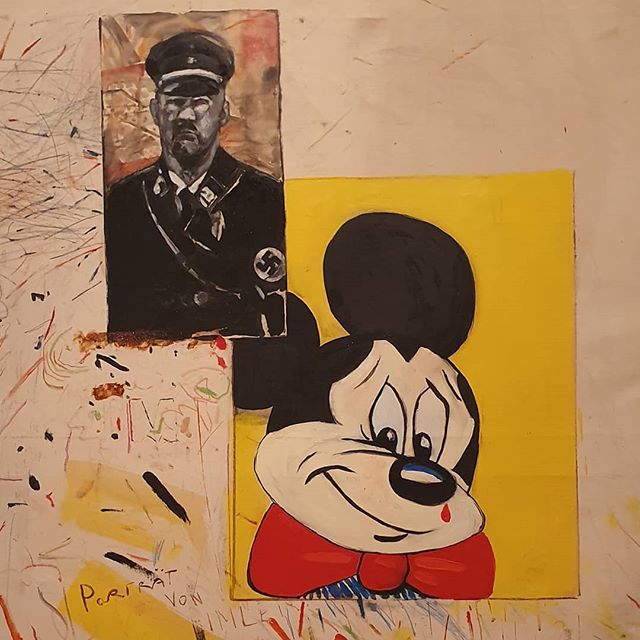 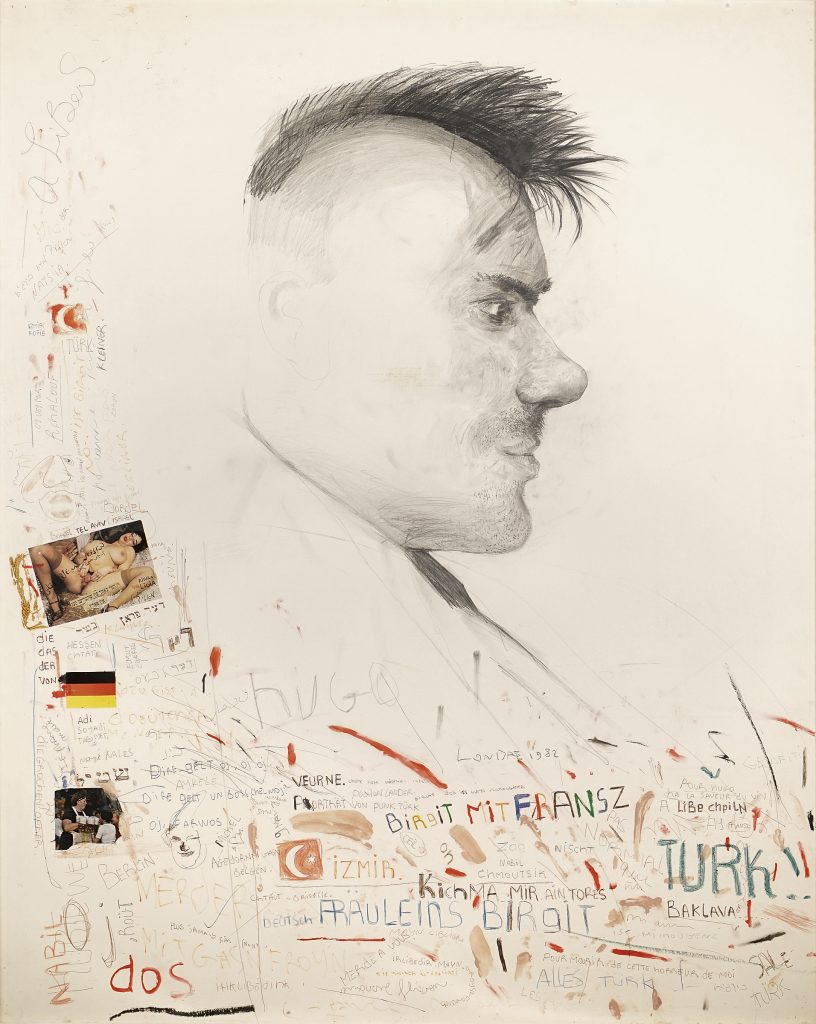 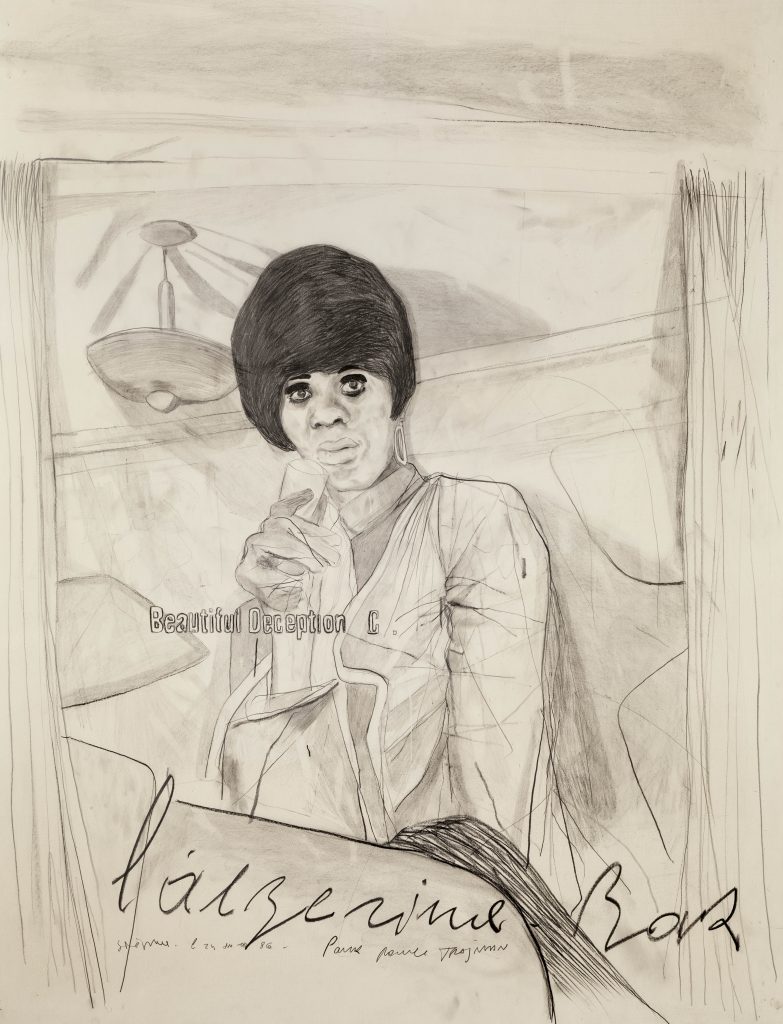 Stéphane Mandelbaum did many provocative portraits of Nazi dignitaries.

Erasures, stains, and scrambled writings like a signature in the margin.

Shady bar: an inspiration for Mandelbaum.

In his daily drawings, there were also lists of robberies. He dedicated one of his exhibitions to a trafficker-pimp. The entrance to another one imitated a front of a brothel. With Stéphane Mandelbaum, the limit between reality and mythomania is difficult to define.

He married Claudia, a young Congolese immigrant. He adopted her daughter and taught her Yiddish by drawing. In 1986, he traveled to the Congo, to his wife’s native village. There, he started trafficking in African art.

On his return, he participated in at least two robberies: a theft of African statuettes and another one of a Modigliani painting, La dame au camé. Following this robbery, the requestor refused to pay, claiming that it was a fake. Then Mandelbaum’s father received a telex from Cyprus saying that his son was imprisoned and tortured in Beirut. The reality was different, and even worse. His body was found along a river in the south of Belgium. The autopsy revealed a violent death: a blow to the skull, the body pierced by two bullets, and the face disfigured with acid.

Like all the rare exhibitions devoted to Stéphane Mandelbaum, this one at the MMK resounds like a tribute. The exhaustiveness of the works presented, the sobriety of the staging, the absence of text, all immerse us in the world of the missing Belgian artist. Between immature violence, provocation, and aesthetic vulgarity, this exhibition confirms the power of attraction of Stéphane Mandelbaum.

I know strange dead people who do not rot

And are as beautiful as adolescent flesh

These are the ones that the living speak of softly

Murdered angels of their ardent youth.

Translation of a Léo Ferré’s song, as quoted by Pili Mandelbaum, Stéphane’s mother.

The exhibition Stéphane Mandelbaum is open until October 30, 2022 at the Museum für Moderne Kunst in Frankfurt.