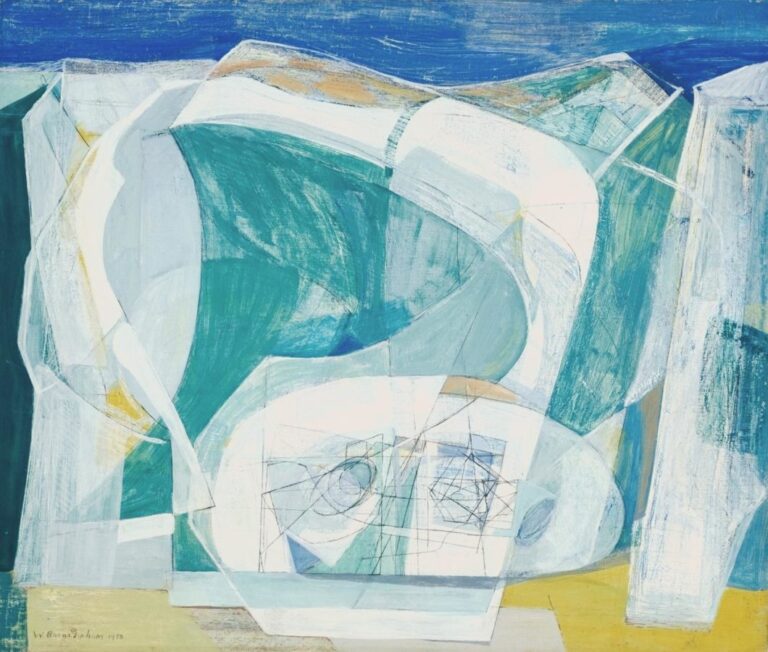 Just before the outbreak of World War II, a small town in Cornwall, UK, became a haven for British artists. Built of granite and surrounded on three sides by the ocean, it was a perfect spot for painters because the light and landscape in St Ives are unique. It already attracted people in the 19th century, especially when, in 1877, the railway reached Western Cornwall. However, the town enjoyed real popularity in the 1930s, when the painter Ben Nicholson and his wife, sculptress Barbara Hepworth, moved there in 1930. Let the abstract waves take you to Cornwall…

Having seen Pablo Picasso, Ben Nicholson started to experiment with Cubism. Yet, one day he met a fisherman Alfred Wallis who, in 1925, a year after the death of his wife, began painting. He painted seascapes and views of ships, usually in a naive style, often with a distorted perspective.

Under his influence, Nicholson started to paint in a relief manner, building shallow and abstract compositions on the surface of his canvases. Gradually, he added figurative elements suggestive of remote house roofs or boats.

After the war, another wave of painters came to St Ives. Among them was Terry Frost, an abstract painter who combined bright colors in various compositions to depict landscapes. In St Ives, he could live cheaply and make friends with other artists. Frost even worked as Hepworth’s assistant for a while.

During the war, Frost was a German prisoner of war in a camp in Bavaria. In St Ives, he met Roger Hilton, who shared the same fate during the war. Hilton, considered a pioneer of abstraction in Britain, had a characteristic style: a thick impasto on his canvas was always covered by a couple of lines made with charcoal. Although it is impossible to find a distinctive style that would unite the artists working in St Ives, they are commonly considered a St Ives School.