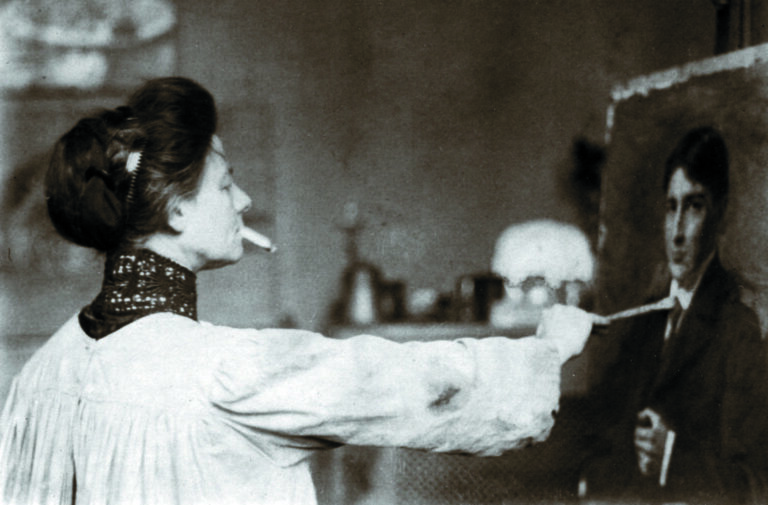 Melania Trump should not be the only Slovenian woman that the world can think of. There is also a painter, Ivana Kobilca, whose independence, artistic autonomy, open-mindedness and enormous artistic skill made her a synonym for national art of Slovenia, a key figure in the artistic and cultural development of the country.

Her fascinating personality is I think reflected in a quote in which she summed up her life:

I wanted to see everything in the world and look behind every curtain: I was always driven forward. And I am not sorry for anything, I have seen the world and life; it was beautiful and full of sunshine, I regret nothing.

Born in 1861 in Ljubljana, at the age of 16 she decided she wanted to be a painter. Yet she had to wait another 4 years to travel first to Vienna to copy the Old Masters, and then to Munich to study under the direction of a painter Alois Erdtelt who ran a private school for girls. Erdelt taught painting in the manner of Dutch painters of the 17th-century and he paid attention to every single detail, a lesson which made Ivana a great portraitist, not only of her relatives and friends, but also of national officials and bourgeois clientele whose numerous commissions let her make a living as an artist.

She held her first exhibition in 1888 in Vienna and a year later she moved back to Ljubljana to make her solo show. Yet, liberated abroad, at home she had to censor her own works. Used to paint from life and photo studies, Ivana often portrayed nudes but after the clamour that arised after her exhibition which showed a portrait of her sister Fanny with bare shoulders, she chose to crop most of her works. In 1891 she moved again, this time to Paris where she quickly gained acclaim at the Salon (she presented there three times, in 1891, 1892, and 1897). Although she mostly interacted with the juste milieu painters rather than the avant-garde Impressionists, the new trends in French art affected also her own style. She loved the work of Pierre Puvis de Chavannes and his melancholic bluish tones, while together with the artists from the school of Barbizon she learnt how to paint en plain air.

She stayed in Paris until 1894 when she went to Florence for a study sojourn. This experience opened her the world of Italian art and in 1897 she was the first Slovenian woman to present at the Venice Biennale. The same year she moved to Sarajevo where extensive commissions permitted her to have “the most agreeable time abroad” ever. She spent there seven years and she joined a group of German-speaking artists with whom she co-founded the Sarajevo Painters’ Club and a magazine Nada. In the meantime, she continued with portraiture which she made her most reliable source of income. In order to find new clients, she attended parties and dressed in the latest fashion, and in order to assume a certain image, she began experimenting with representation of her own self, which she documented in self-portraits (also photographic ones).

In 1905 she decided to return to Ljubljana but then in 1906 she moved to Berlin, where she stayed until the outbreak of the First World War. Although she received a lot of support from a wealthy patron, the competitive art scene made her life as an independent woman-painter quite difficult. Nevertheless, her boldest paintings come from this period yet her artistic experiments were forcefully stopped by the war when she decided to return to Slovenia and stay there permanently. She worked incessantly until her death in 1926, painting still lifes and portraits.