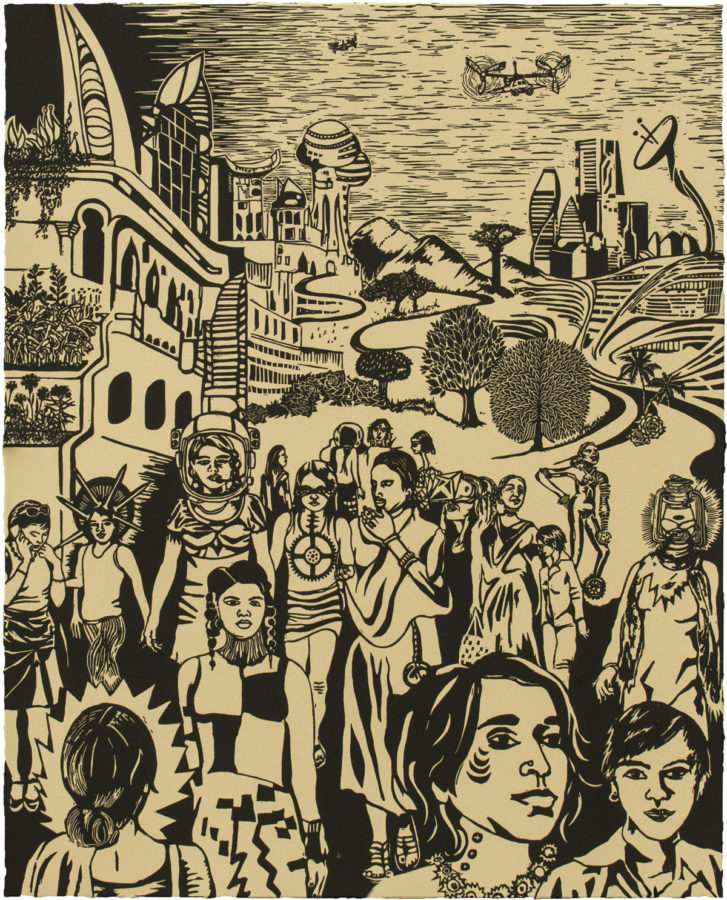 One evening I was lounging in an easy chair in my bedroom
and thinking lazily of the condition of Indian womanhood. I am not sure whether I dozed off or not. But, as far as I remember, I was wide awake.

I saw the moonlit sky sparkling with thousands of diamond-like stars, very distinctly. All on a sudden a lady stood before me; how she came in, I do not know. I took her for my friend, Sister Sara.
‘Good morning,’ said Sister Sara. I smiled inwardly as I knew it was
not morning, but starry night. However, I replied to her, saying,
‘How do you do?’

The story is embedded with an aspiring secret of women, who believe that there does float a sense of gender inequality, and it needs to be flipped, even if it is for a shorter period. Presenting a utopian and dreamy account of a world governed by women, one almost considers and agrees with the narrative so expectedly offered.

In this exhibition, Chitra Ganesh, with a history of repetitively warming up concepts on feminism, popular culture, and a stream of womanlike imageries that persistently occupy her mind, has technically probed in the real history of feminism. The mentioned context forms one of the most fundamental readings of the show. Sultana’s Dream by Begum Rokeya, as masses popularly called her, is a sci-fi tale, which Chitra has extended in her sequel show, Her Garden, a mirror exhibited at The Kitchen, New York. Moving ahead to the other three notions, the artist focuses on illustrations in Linocut, unraveling a story of Bengali Muslim women and a confused gender-biased society rampant in India.

Feminism in India and Begum Rokeya

Feminism in India was paved in the later 19th century when female leaders, like Savitribai Phule and Pandita Ramabai, strived towards the emancipation of women from rampant social practices which proliferated at the extent of death. Savitribai Phule and her husband, Mahatma Phule, eminent social reformers, heralded modernism in a dilapidated and superstitious society’s thinking. Fighting sati, childhood marriages, and other antisocial practices, the couple was monumental in shifting the perspectives of Indian men and women, which unfortunately is still under the ongoing process. In the time when liberal souls do not accept the term feminism, the ideology still clangs and reverberates to emancipate squabbling social dilemmas in India.

Begum Rokeya, serving as one of the path-breakers for Muslim women in Indian society, worked until she died, amending possible solutions and appendages for the economic rifts in female upbringing. After her husband Sakhawat Hossain’s death, she founded Shekhawat Memorial Girls’ High School in Bhagalpur at first and then in Calcutta (now Kolkata), where a generation of women learned and vocationally trained themselves, objectively supporting their future.

Rokeya was a Bengali Muslim and had married at the age of 18 to Khan Bahadur Sakhawat Hossain, who was 34. With clarified views toward women’s education, Sakhawat Hossain, magistrate of Bhagalpur (a town in West Bengal) had commendably inspired Begum Rokeya to write and express her opinions. As a social contribution towards Bengali Muslim women, she had founded the Islamic Women Association in 1916.

Because the exhibition, Sultana’s Dreams, dated February 28–June 14, 2020, has been affected by the present COVID-19 pandemic, MAG has arranged a series of virtual tours by Nancy Norwood, MAG Curator of European Art. You can check them here: Tour 1, Tour 2, Tour 3, Final Tour.