The Old Man And The Art: Ernest Hemingway’s Art Collection 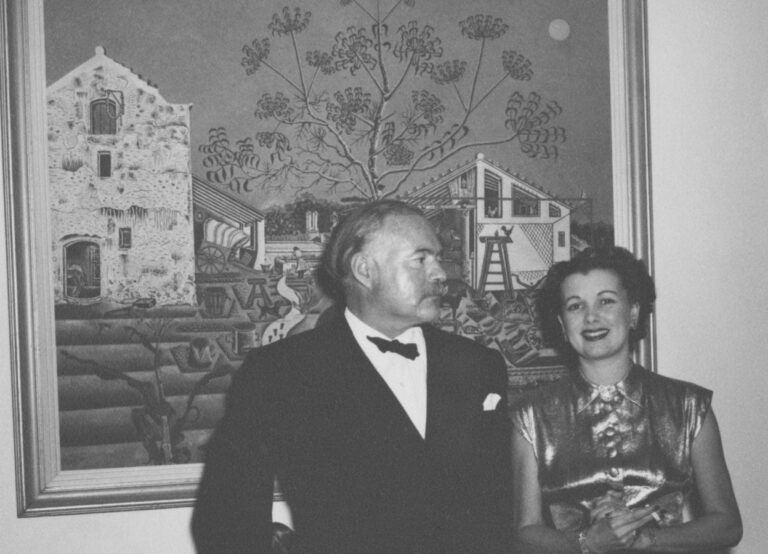 Ernest Hemingway was a famous writer, that’s a fact. But not everyone knows he was also an art collector and that he began already in his early days in Paris. Ernest and his first wife, Hadley, first came to Paris in 1921. Soon after their arrival, they became well acquainted with the other writers and many of the great masters of the twentieth-century painting, among them Miró, Masson, Gris, and Picasso. Hemingway also befriended Gertrude Stein who was a collector of contemporary art, who urged the young writer to learn more about art. This is how it all started. Here we present stories of the most famous paintings from Hemingway’s collection.

The Farm was made by Joan Miró between the summer of 1921 and winter 1922. It is a kind of inventory of the masia which is a traditional catalan farmhouse owned by his family since 1911 in the town of Mont-roig del Camp. Miró himself regarded this work as a key in his career, describing it as “a summary of my entire life in the countryside” and “the summary of one period of my work, but also the point of departure for what was to follow.” Ernest Hemingway bought Miró’s painting as a birthday present for his first wife, Hadley; after paying off the last installment of the 5,000 francs it cost, he brought The Farm home: “In the open taxi the wind caught the big canvas as though it were a sail, and we made the taxi driver crawl along.” Hemingway later said, “No one could look at it and not know it had been painted by a great painter.” Now the painting is preserved in the National Gallery of Art in Washington DC, where it was given in 1987 by Mary Hemingway.

In 1931, Hemingway and his second wife, Pauline Pfeiffer, purchased The Guitar Player (1926) and The Bullfighter (1913), both by their friend Juan Gris. The latter work would be reproduced as the frontispiece for Hemingway’s treatise on bull fighting Death in the Afternoon(1932).

André Masson, The Throw of the Dice

A Throw of the Dice is a Cubist-influenced reference to Stéphane Mallarmé’s Un Coup de dés jamais n’abolira le hazard, and/or Igitur. Throwing of the dice, is the representation of human power, and the “hazard,” which it cannot succeed in mastering. A Throw of the Dice is filled with references to events and personal experiences as well as to acquaintances who gathered in his studio on the rue Blomet. The painting was bought by Ernest Hemingway directly from the artist’s studio. The writer owned couple of Masson’s works – five of them are now in John F. Kennedy Library in Boston.

Monument Under Construction (1929) features a barely articulated colossal head with buttonlike turquoise eyes and tiny figures on ladders or scaffolding reaching for the head’s eyebrow and lip. Hemingway bought this painting in Berlin.