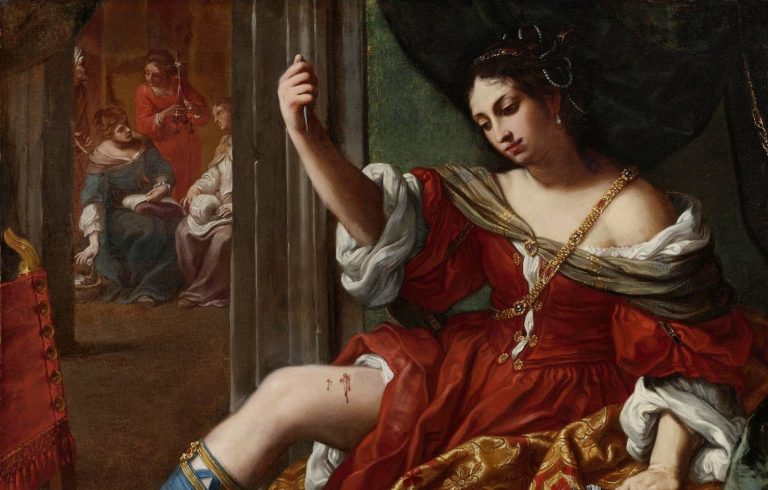 The Mirror and the Palette: 500 Years of Women’s Self Portraits

Elisabetta Sirani (1638-1665) was born in Bologna, a progressive city with a liberal attitude towards educating women. She was a pioneering female artist who established an academy for other women aspiring to become painters. Sirani was only 27 when she died at the peak of her successful career. Her talent and mentoring of other young women in her community made her an artist to look up to in Bologna and beyond.

During the 17th century, women did not have many opportunities to pursue a profession. They were either to marry or to enter a convent as a nun. A few lucky ones who had the chance to train as artists were able to do so by receiving an education at their fathers’ or brothers’ studios. Sirani started learning how to paint at the workshop of her father, Giovanni Andrea Sirani, who was a Baroque painter and printmaker.

Under her father’s wings, she quickly developed her own style of expressive brushwork, rich coloring, and deep shadows. While working hard at improving her techniques, Sirani studied historical and Biblical narratives from the books in her father’s library. Her paintings reflect on the fine education she received in classics, music, and philosophy. Her contemporaries referred to her as the best brush in Bologna.

A Defining Year in Sirani’s Career

In 1657, at the age of 19, Sirani gained her first major commission to create a large mural painting for a monastery in Bologna. Around this time, her father fell ill with arthritic gout. His condition meant he was unable to hold a brush. As a result, she took her father’s place as the master of his workshop.

Becoming her family’s breadwinner, she oversaw running her father’s workshop and providing for her four siblings and parents. While running her father’s workshop, which had 20 pupils, she founded a school for women who wanted to receive an education and become artists. Both her father’s studio and her newly founded art school thrived under her leadership. She was not only praised for opening up new avenues for women to receive education but also for growing into an erudite and talented artist. Having an exemplary work ethic and discipline, she was keeping a meticulous list of her paintings and who commissioned them.

Young Artist in the Spotlight

Sirani painted so many works in such a short period that many of her rivals doubted that she painted them all herself. In order to refute such charges, she invited the public to watch her paint a portrait in one sitting in 1664. From then on, many locals stopped by her workshop to watch her paint.

Unusual for her time, Sirani always signed her paintings. While her male rivals were not signing their works, the fact that she did so shows her wish to establish herself as an accomplished artist. Carlo Malvasia, her mentor and biographer, depicted Sirani as,

The scorn of nature, the prodigy of art, the glory of the female sex, the gem of Italy, the sun of Europe.

Elisabetta Sirani died suddenly in August 1665. Her death came as a shock to her community as she was so young. Her close circle believed her maid poisoned her. Biographer and theoretician Carlo Malvasia suggested she died of lovesickness because Sirani never married. Descriptions of her symptoms and a later medical examination concluded the cause of death as a stomach ulcer. The intense stress she was under as she had to provide for her entire household may have caused the ulcer.

Sirani produced over 200 paintings, 20 etchings, and hundreds of drawings during her 10-year artistic career. At the age of 19, she was not only running her father’s workshop and providing for her family but she was also teaching at the art academy she founded for women.

In 1994, a crater on the planet Venus was named Sirani in her honor. The same year, her painting Virgin and Child featured on the Christmas stamps in the US. It was the first time a female artist’s work was selected for such an occasion.