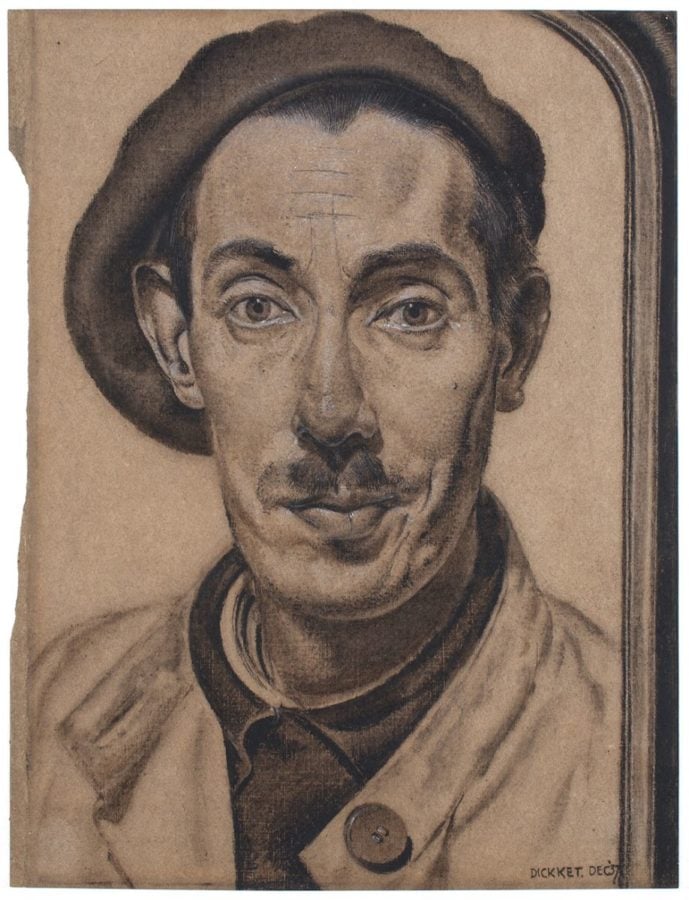 The extraordinary self-portraits by Dick Ket, many of which are unknown to the world, quietly invite their viewers into a silent life spent in a small space of a few square meters. They tell a beautiful story like a light, thin feather that flies away and suddenly disappears by the power of the wind.

Dick Ket was a Dutch magic realist painter of the first half of the twentieth century. Born in 1902 in Den Helder, a small port in the far north of the Netherlands, Ket was born with a serious heart defect. It is believed that his condition was probably the tetralogy of Fallot (also called blue baby syndrome) and was incurable at the time. This heart defect causes insufficient nourishment of tissues and organs and drumstick fingers or, as doctors say, hippocratic fingers.

His most notable works are his still lifes and self-portraits with “drumstick fingers,” a consequence of his pathology. He produced a total of 140 paintings, most of them in the last ten years of his life. Forty of these one hundred plus paintings are self-portraits. He is a cult for those who know him-especially in Holland- but unknown to most outside of the Netherlands.

As a child, he was very frail, making him susceptible to bullying at school. Ket’s situation of constantly moving around due to his father’s job as a military officer even made it all the more difficult for Ket to fit in with his peers at school. While he was in secondary school, however, he met two teachers who appreciated his talent and encouraged his artistic ambitions.

Johan C. Kerkemeijer, his drawing teacher, advised him to enhance his artistic talent and directed him towards the techniques of oil painting. His other professor, Henri Adrien Naber, teacher of chemistry and physics, convinced theosophist and author of scientific works in which he would like to demonstrate the relationship between geometry and mysticism, influence him deeply into his vision of life and things. Naber’s theories lead him to seek a parallel between the laws of physics and existence, to find a sense for his condition, but also to build something with the elements around him. And as a result of this risky technical experiments, some of his paintings, after half a century, are not yet completely dry.

After studying art at the Kunstoefening Arnhem Academy from 1922 to 1925, Dick could no longer travel. Debilitated by chronic fatigue induced by his illness and growing phobias – especially agoraphobia – he ends up living in seclusion with his parents in Bennekom, a small town right in the middle of the Netherlands, far from the sea that he grew up with throughout his childhood. From this small fortress -that to this day clashes with the traditional houses that surround it- Dick Ket did not step out of his house until after 1930. The unsettling crudeness and evolution of his face in his self-portraits that he created while hiding away from the world are the only record that exists of Ket’s life from these years spent in seclusion in his home.

Sadly, Ket met his death several days before his 38th birthday. His posthumously-published letters allowed for his presence to continue to remain on Earth. These letters revealed his sense of humor and self-irony, his passion for the arts, his love for literature, music, cinema, and for word games and mystery.

Through his self-portraits, he says to his viewers that it was never necessary to paint a sea to depict water. Instead, just spy its fall from a faucet in a bowl. To explore the theme of humanity, he used the same technique: just look for the world in yourself and in the people who are part of your world. He searched for the meaning of humanity in Schilt, his girlfriend, a common subject of his paintings, and his father, whom he considers his best friend.

While Dick Ket’s earliest paintings are impressionistic in style, his paintings also appear to be strongly influenced by Neue Sachlichkeit and Magischer Realismus- a term coined by the art critic Franz Roh in a famous essay of 1925. In this essay, Roh speaks of a “third reality” that emerges from the concrete world and the magical dimension of dreams and hallucinations.  Dick will come to know this movement through reproductions of these paintings that feel like his own.

Despite his seclusion from the outside world, he still manages to have some of his paintings exhibited. Between 1932 and 1940, his works appear in collective exhibitions in a contemporary Dutch circle that is based between Amsterdam and Eindhoven as well as in Brussels, Venice, and Paris. He gained a certain notoriety thanks to a personal exhibition, that was his first and sadly his last at the Kunstzaal van Lier in Amsterdam, from 1933 to 1934. Luckily, his paintings were appreciated (though they were not free of controversy), and several of his works were also purchased by some of the attendants of his exhibition.

His meticulous still- life paintings each feature only a few objects, such as bottles,  empty bowls, eggs, musical instruments, grapes, and newspaper clippings. Ket depicts these common objects with angular cuts in various perspectives as an analytical technique for his desire to express emotion in his compositions.

It is in his self-interpretation that Ket creates one of his most poignant masterpieces. In his self-portrait of 1932, the composition evokes the classic portraiture of the German and Italian Renaissance. Furthermore, the classic portraiture is displayed through Ket’s bizarre and suffering appearance that is distinguished by the strange pigmentation of his skin that is of a blue-grey tint. His shirt is open on his chest to allude to his heart problem. He tightly tightens the flower in the pitcher to say that life will not escape him without fighting.

Behind him, a horse stands in mid-air, perhaps to recall the childish innocence of how he views the world. In fact, this is not the only time that this horse makes an appearance in his paintings. However, the presence of the horse in several of his paintings may be his “signature,” since Ket means “little horse” or “little boy” in the lower Flemish dialect. In the lower right-hand corner, he painted the word “FIN” that may have served as a reminder of his impending death. His life filled with irony and tragedy made him not only a fascinating painter but also a respected figure of the twentieth century.