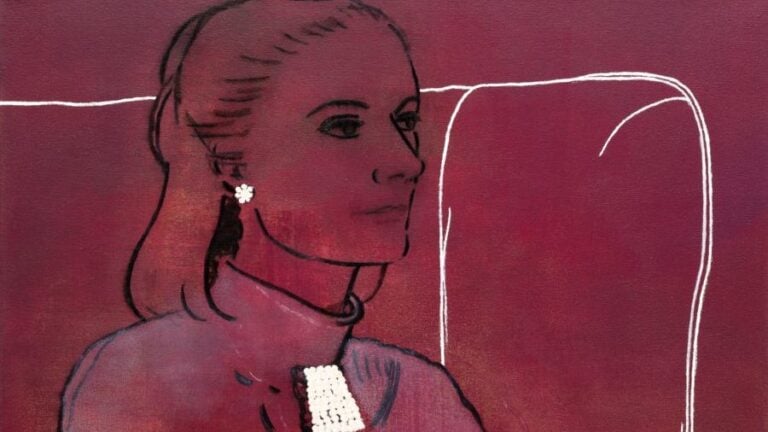 Naomi Frears is a visual artist and filmmaker based in the Porthmeor Studios in St Ives, UK. I was lucky enough to touch base with this incredible artist as her new exhibition begins at Beaux Arts, London. The exhibition consists of over 25 new works using oil on canvas, acrylic on wood, dry point on linen and mono printing.

The figure, and the space around it, seem to be an obsession for Frears. A film-maker as well as a painter, I asked if visual art and film complemented each other or competed for her head space. She answered that they are both great ways to think about things visually. In fact, in her paintings, Frears might be said to use an editing process similar to that of film: framing, moving, removing and introducing new elements with paint. As a result, the paintings often have shadows or ghosts of previous ideas, figures, and structures visible within the painting.

In this new series of work Frears depicts a variety of enigmatic human forms, that simultaneously confront the viewer and appear lost in their own worlds. The vast space gives no indication of any concrete context, but possesses a certain depth that pulls the viewer in. Frears sometimes describes her works as love letters, though she is not always sure to whom they are addressed. She describes the process of painting as ‘choosing every day to be completely lost – often happy lost.’ I asked Frears to describe this further:

‘The really exciting bit is the beginning. I am confident and everything is in front of me. The middle involves me changing my mind many times about what the painting could or should be. When I finish a painting I am happy and relieved - it doesn't need me anymore.’

As an artist with a wide range of skills and interests, I asked Frears if she had a favourite medium or tool, and she replied that she loves printmaking. Having seen the front covers she produced for the London Review of Books, I must agree. In past years, Frears has run supportive printmaking sessions for young people, allowing them to dive into the experience even if they have no background in art or printing.

Born in 1963 in a Leicestershire village, Frears studied art at Sunderland and Loughborough, but has lived and worked in Cornwall for many years. Frears’ workspace in St Ives is one of the famous Porthmeor Studios, previously occupied by Francis Bacon, who described it as ‘the best room in St Ives’. Artists have worked in these old fishing industry buildings since the 1880s.

Sitting directly above the beach with huge windows looking out to sea, Porthmeor Studio has been home to some of the great names of British art including Barbara Hepworth, Ben Nicholson, Wilhelmina Barns-Graham, and Roger Hilton. I ask if this is this inspiring or intimidating? Frears says inspiring. She calls the space magical, the perfect studio, and enthuses that it's great to be in such an extraordinary space with such a history.

Frears says that having a dedicated studio space is vital to her as an artist. And she spends a lot of time there – she works hard – usually five days a week, and every single day during the run-up to an exhibition.

Her works are incredibly personal and intimate. Frears spends years building up layers of paint, removing it, changing things around. She may live alongside a canvas for years before she feels it is ready to leave the studio. These are objects with a psychic presence, almost like friends, or children.

Gallery education has always been a part of Frears’ life. She lives and breathes art, giving back to the wider community. Inspired both by her contemporaries and by more senior artists she says she is excited to see the Danh Vo show at South London Gallery. To young artists she says just keep going and make sure you have a few people around you with whom you can have good conversations.

Painter, printer, film-maker, curator and educator – I urge you to take the time to have a conversation with the work of the multi-talented Naomi Frears.