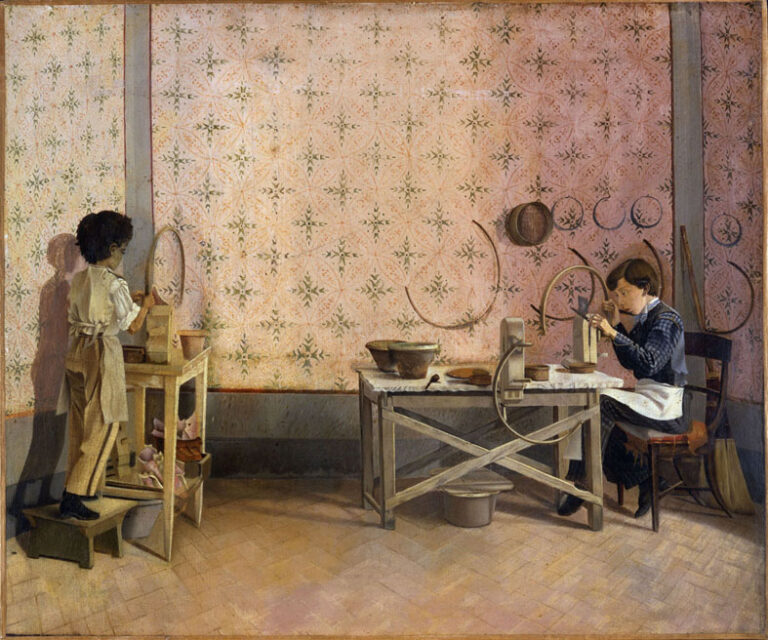 Inside the walls of Lucca, a small medieval town in the heart of Tuscany, childhood awakens memory and inspires creation in an exhibition inspired by the fascination of Italian art during the 1900s with the art of children. L’artista bambino (the child artist), a perspective far from academic perfection, because the sense of beauty is less developed in children but is more pure, is a poetic declaration and a simplified vision of the world without prejudices or paradigms.

The center was inaugurated in 1981 with the primary purpose of offering a tool for the study of the past and the present of art. With its many different spaces, it is a true laboratory of study and a center of cultural experiences.

A bibliographic catalog of the library is available to the public online, whilst the video library and book collections specializing in the history of art and architecture consist of about eighty thousand volumes and three hundred thousand art catalogs.

Childhood and primitivism in Italian art

The exhibition starts with the interest during the late nineteenth century towards the phenomenon of children’s art, where paintings and sculptures such as “First Steps”, by Adriano Cecioni, and “The Failure”, by Giacomo Balla, are witness to the energy and instinct of childhood translated in an early, simplified style.

In addition to the smaller paintings, there are important pictorial cycles by Spartaco Carlini which act as a period register. During World War One, the image of the child was one of the most used and exploited in propaganda. Newspapers like “Corriere dei Piccoli”, which narrated the Great War through illustrations, sometimes softened the topic to explain to the kids through comic strips what was going on in the battlefield and what their parents were going through.

Works lent to war propaganda by artists such as Carlo Carrà, Giorgio de Chirigo and Ardengo Soffici remained as a trace of childish figurations and, like a sort of cultural osmosis, the art of that time was affected by this peaceful invasion. The end of the First World War marks an important cultural change towards a new metaphysical classicism; forms of resistance are showed in art in a childlike and “primitive” sense with a vision centred in an unreal atmosphere.

The exhibition charts an interesting journey, starting at the end of the nineteenth century and carrying on into the first decades of the twentieth century. It showcases the works of artists fascinated by the world of children, the essence of which they convey in various forms and styles: simplicity, poetry, softness of colors and the subjects represented.