Almada Negreiros: The Man Who Loved All the Arts 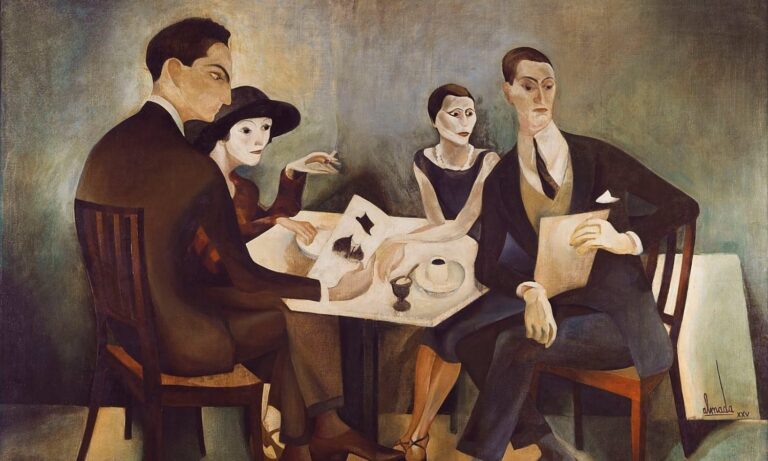 Have you heard about the writer Almada Negreiros? He is the author of beautiful verses, like the Canção da Saudade, in which he says “if I were blind, I loved everybody…“ Maybe you know him better as a writer and poet, but the artist also produced various illustrations and paintings during his intense life, and today – which is his birthday – is a good day to remember his artistic trajectory.

Born in 1893 in Sao Tome, Almada Negreiros began to write and illustrate handwritten newspapers at the age of 12. In the following years, he continued collaborating with mainly humorous periodicals of the time. At the age of just 20, he held his first solo exhibition with about ninety drawings, and the following year became artistic director of a weekly magazine.

Negreiros created illustrations for posters, magazines and books, while also writing his novels, plays, essays and novels. By the 1930s, he became increasingly sought after, especially for official works, including the creation of commemorative editions of stamps, or studies for the stained glass windows of a church in Lisbon.

The artist also created frescoes, tapestry cards, and even panels for official buildings. Varying techniques, and always writing, he was a dedicated supporter of modern art in Portugal. Negreiros worked until a year before his death in 1970 and his last works were made for the Calouste Gulbenkian Foundation and the University of Coimbra. Almada Negreiros had a profoundly positive view of life, and a serenity that made him say there is no misunderstanding between me and life.

It is also necessary to emphasize the artist’s role in the promotion of modernist movements in Portugal. He produced manifestos in which he discussed the current literary production and as a writer, he was ironic, sarcastic, and intelligent.

In addition to writing, he also became involved in the current affairs. In 1917, he held a conference dressed as a worker. In the same year, he wrote a manifesto entitled Ultimatum Futurist to the Portuguese Generations of the 20th Century, in which he said: I do not belong to any of the revolutionary generations. I belong to a constructive generation. He also pointed out national decadence in the arts and culture. According to the artist, indifference was absorbing the patriotism of the Portuguese nation.

Believing in art and literature as basic elements for building a better humanity, Almada wrote: When I was born, the phrases that would save humanity were already written, all that was left was to save humanity.

Almada Negreiros was a man who wanted to unite all the arts. This artistic trajectory earned him numerous awards, like the Columbano award for the painting “Woman”. He also received prizes, such as the Domingos Sequeira Prize, for his panel paintings. In addition to the awards, he was often invited to participate in exhibitions, including international exhibitions such as the Portuguese Artists Exhibition in Brazil in 1942.

The production of Negreiros, in all the areas in which he worked, is intense and dynamic. He helped define the modernist movement in Portugal and was one of the most productive artists of his generation. Known affectionately as “master Almada”, he was a champion of novelty and aesthetic provocation. The works he created, both in literature and in the visual arts, the exhibitions in which he participated, the prizes he received are proof that he significantly contributed to the artistic production of Portugal.