Two Unknown Paintings by Raphael Discovered on the Vatican’s Walls

Two previously unattributed paintings from the wall of The Vatican Museums has been attributed this month to Raphael. “The wall” is not the best description of the place. The frescos we are writing about are placed in Raphael’s Rooms which served as Pope Julius II’s apartments. It was that Pope, who commissioned The Sistine Chapel and many other pieces of art, that are now considered as classic Renaissance pieces. The Pope commissioned Raphael and his pupils to paint the rooms, and they adorned each one with a different theme. 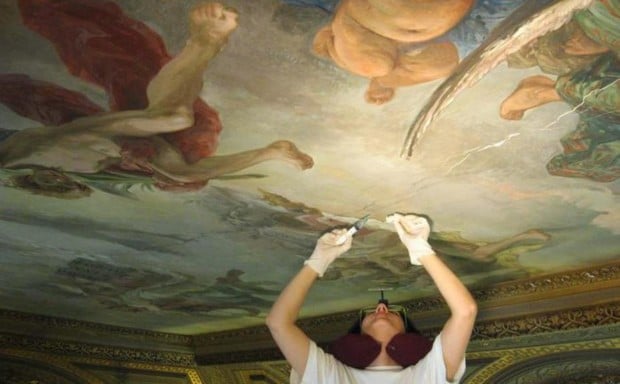 Three of the rooms – as you would expect from the name of the rooms – contain paintings by Raphael himself. But experts didn’t think that the fourth—and largest—chamber, called the Room of Constantine, was also painted by the master.

The Room of Constantine depicts four significant moments in the life of Emperor Constantine I, who’s credited with converting the Roman Empire to Christianity. Experts had always believed that Raphael had sketched plans for the frescoes, and his pupils finished them after Raphael’s sudden death on April 6, 1520. But new restoration efforts prompted experts to take a closer look, and they noticed that two allegorical figures in the frescoes appear to have been painted by Raphael.

One of the frescos depicts the Vision of the Cross, the moment Emperor Constantine claimed to have seen an image of a holy cross in the sky before a decisive battle. At the edge of the large-scale painting floats a woman who represents Friendship. A second scene, which depicts the battle between Constantine and his pagan brother-in-law Maxentius, shows the figure of Justice. Experts now say that Raphael painted both images.