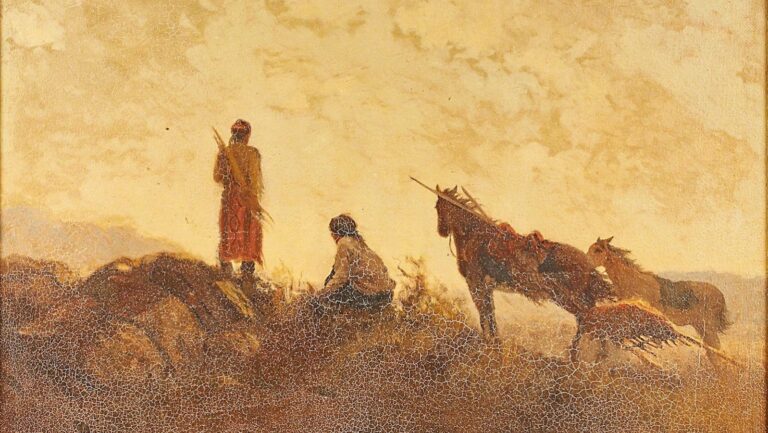 The landscape of Long Island, New York drew a host of American Impressionists and their associates from the late nineteenth century and into the early twentieth. The Shinnecock School, the first en plein air art school in the United States, was founded in part by William Merritt Chase at the behest of Mrs. William Hoyt. By the 1930s, the school had ended and Long Island awaited the arrival of the abstract expressionists, such as Jackson Pollock, Mark Rothko, and Willem de Kooning. In the meantime, William Langson Lathrop, a tonalist painter and founder of the art colony in New Hope, Pennsylvania, enjoyed summers painting the Montauk landscape from aboard his sailboat, The Widge.

This essay is the author’s account of a fateful day Lathrop spent painting in September 1938. It won the 2017 Emerging Young Writers Prize for Nonfiction from the “Dan’s Papers,” a Long Island-based magazine.

The deck of The Widge rocked gently in the September swells, sending tubes of paint rolling in their box. A worn yet steady hand reached down and grabbed the green, squeezing it into a blob of white to produce a pale, sage color. On a rolling landscape of dune and scrub, a ripple of beach grass appeared, streaming across the foreground in the rising wind.

William Langson Lathrop sat back on his stool and pursed his lips, gazing over the canvas at the coast of Montauk not far off the prow. It lacked the fir and farmhouses of his home in New Hope, Pennsylvania – precisely why he had come so far. At 79, and with an illustrious career behind him, it was time for a change of scene.

For seven summers prior he had taken the boat built by his own two hands out onto the open water as his floating painting studio. He captured the moods of the shores he passed, each trapped in time by a veil of fog and obscured on the horizon by the smear of an index finger.

Most painters in his day were intrigued primarily by the light of the sun – how it fell on cobblestones and wide-brimmed hats, the way it filtered through glasses of sherry and storefront windows. They stippled and speckled in bright colors across their canvases, calling themselves “impressionists.”

William erased the pencil outline of a cloud on a blank spot of canvas and removed an unmarred patch from the blob of white with the tip of his brush. Right before it touched the fabric, he pulled his hand back and stuck the end in his mouth, pensive.

For him, the atmosphere – the elements that hung in the air between the light and the surfaces it touched – was a far worthier subject than the light itself. There was a mysticism in the forces of nature that created such looming, ominous forms as clouds, and he intended to illuminate it.

Painting en plein air never left enough time to do it justice; the atmosphere is a fickle thing, as unpredictable as a dog in front of a camera. If you don’t move quick enough, it’ll get bored and go on its way.

Gazing directly up, a swatch of blue sky disappeared behind a blanket of grey. The air, already damp with days of spotty rain, felt cold against his face. If he were to finish the painting in the studio later, it would need a proper start on the deck of The Widge.

Working at a faster pace than usual, William swathed tan and grey over a field of light blue, leaving hints of the sky above in the beach below. Pink and ruddy burgundy cut faintly across the sand as he neared the horizon.

Peering around the canvas, he saw that space where the sky met the land had grown considerably darker than he had painted it. No matter – such changes occur quickly in nature, and he was no stranger to the whims of the wind. It was his pleasure to witness the faculties of nature firsthand.

But there was little time to make the adjustment: the first drop of rain plunked onto the palette, blending the blue and green together into a swampy sort of yellow. William took to the canvas, and it became a blur of hues and shades showered in soft, muted color until the coastline appeared. Above the dunes rose a plume of grey vapor like that of a steam engine – or perhaps a whole herd of them – approaching from the distance.

A raindrop landed right on the canvas. It was time to turn in.

Shuffling his paints and brushes into the box, William hurried the canvas and easel into the ship’s cabin. He placed the painting down on a bench and noticed the bottom left corner was empty. He almost laughed, grabbing a brush and dipping it into a puddle of black on his drying palette. In a hurried scrawl, he signed and dated the bottom: September 21st, 1938.

Topside again, William took a hold of the jib line and brought it in, the wind strong enough that it fought him till it folded. Though he was an older man than the one who had braved the Naval Academy in youth, he took to the rigging like any able seaman. Salt spray over the starboard side landed on his back, sending a chill up his spine.

William descended and grabbed the receiver, listening closely to the ticking message. It was a small craft advisory; a gale was arriving from the south.

This excited the painter; the opportunity to ride out a storm was a rare one. Unfortunately, Atlantic coastal waters were no place to do it – so he made for the shelter of Fort Pond Bay.

Coming about, he listened to the wind howling in the spar. It was hollow and empty, bringing with it a pang of loneliness. He missed his wife, Annie, and the warmth of their house when they held tea for family and friends. As much as he valued his solitude on the sea, William longed for his companions. Engaging in truly good conversation was a dying art.

The rain fell heavier against the deck. Annie would have scolded him for being out in foul weather. He chuckled at the thought, pulling the tiller toward him to angle into Fort Pond Bay.

Over the dunes, he could see a mast or two, other travelers in the storm seeking refuge. As he rounded the spit of sand, two fishing boats came into full view.

William tried to wave, but the wind gusted, sending the boom flying towards him. Nimble yet, he ducked underneath, pushing against the tiller. The Widge glided along the shore of the bay, rocking as whitecaps slapped her hull. The storm was kicking up fast.

Unsure of how much water there was left to draw, he brought in the mainsail and dropped anchor, mooring within sight of the two fishing boats. They rocked in the gale as well, weathering the beating as best they could.

Seeking some relief from the rain, the painter ducked into the cabin. The radio continued to beep, but it brought the same warning. He struck a match, leaving a wisp of smoke as he lit a lantern hanging above the folding table.

Through the cabin portholes he watched the bay rise and fall, framed whimsically in the brass circles. Outside, lightning snapped to the southwest by the lighthouse. The great tower’s beam swung around, blurred in the rain that pounded the glass. Thunder overhead shook The Widge.

A swell jolted the cabin, sending a nautical chart rolling on top of the painting of the shoreline. William snatched it up, relieved to find the paint hadn’t smeared.

As he gazed at his work, the sounds of the storm writhing outside, something in the threatening clouds spoke to him. He saw the very winds that whipped around The Widge barreling down on the viewer, climbing over the horizon with an unstoppable ferocity. He could hear it throbbing in his ears, rumbling against the hull to the point where it shivered as if alive.

The cabin still open to the elements, William walked to the steps and rose, coming halfway out and resting his arms on the top deck. His wisps of hair whirled around his head, spectacles beaded with rainwater and salt. He was awash in the glory of the storm, invited to cross the bridge between man and nature that fascinated him so deeply.

A low roar, barely heard above the din, rose from the north side of the bay. The beam from the lighthouse cut over the water, trailing across a great, grey wall that surged towards The Widge. It was the biggest wave the artist had ever seen, roiling with the sheer force of the hurricane.

A faint smile flickered across William’s face. He had spent a life dedicated to the earth, its colors, tones, and temperaments, and the hardworking people who tend and keep it. He counted himself among them – a farmer in youth, a sailor at hand, and a poet at heart.

The wave rising, moving ever closer, he took a final breath of damp, salt air.

When The Widge washed ashore several days later, William Langson Lathrop was not on board. Instead, they found his final work: a landscape of Montauk dated September 21st, 1938. Forever captivated by nature’s power and spirit, the artist’s last painting was of the very storm that took his life.