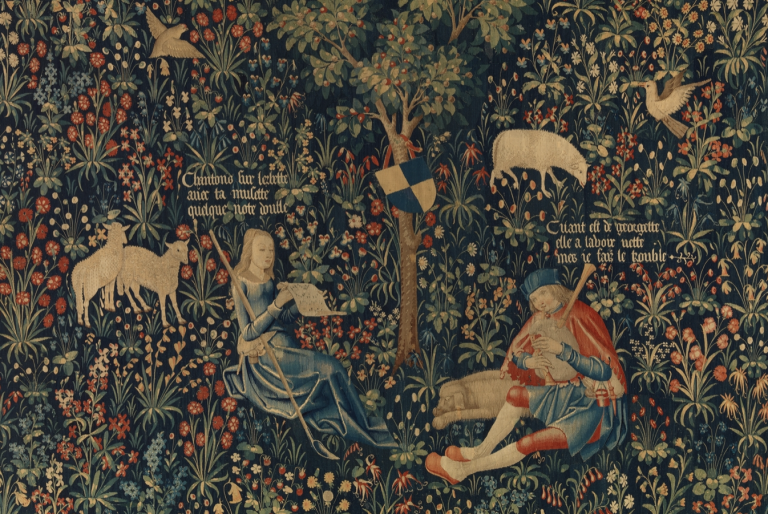 In Charles Perrault’s 17th-century literary world, knights, dragons, and spellbound princesses still existed centuries after the topic diminished. As the author of Sleeping Beauty and the predecessor of fairytales, Perrault’s body of work is a literary triumph. Yet, it was Walt Disney and Eyvind Earle who transformed the fairytale into what we know today. Inspired by Shepard and Shepherdess Making Music at The Metropolitan Museum of Art, the medieval tapestry helped invent the wonder that is Sleeping Beauty.

Everyone knows the tale of Sleeping Beauty thanks to Walt Disney. But the 1959 film was based on Charles Perrault’s collection of fairytales published in 1697 and dedicated to King Louis XIV’s niece. The 1695 original manuscript, Contes da ma mere l’Oye (Tales of Mother Goose) is now at the Morgan Library & Museum in New York City.

Within the book of fairytales is La belle au bois dormant (The Sleeping Beauty). The tale follows the story of a young princess cursed to sleep for one hundred years after pricking her finger on the spindle of a spinning wheel. Perrault’s account seems to have been a fiction of his imagination since, by the 17th century, stories of medieval knights, damsels, and dragons were far behind their time. However, it was the perfect theme for art director Eyvind Earle to transform into a Disney movie. While Disney’s Sleeping Beauty is similar to the original, Earle captured medieval representations of courtship, music, and nature by referencing medieval art and tapestries.

It all started with the Unicorn Tapestries at the Met Cloisters. According to art historian Wolf Burchard, John Hench (a Disney employee close to Walt Disney) visited the Met Cloisters in the 1950s, where he witnessed the tapestry set. Captivated by the Unicorn Tapestries’ design and enchanting theme, Hench proposed it to become the visual template for Sleeping Beauty. Even though the Unicorn Tapestries served as a fanciful historical reference, it lacked the medieval representation of courtship. Therefore, another medieval tapestry in The Met’s collection became a visual source of inspiration, Shepard and Shepherdess Making Music.

But why were tapestries chosen instead of paintings?

Unlike paintings, European tapestries could consume the viewer within a story on a cinematic scale. They also symbolized the patron’s wealth while simultaneously serving a practical purpose. Due to their materiality, tapestries were easily portable and provided insulation to medieval castles.

Disney and his team then realized the only way to make Sleeping Beauty feel medieval was to capture the essence of a medieval tapestry, which is exactly what Eyvind Earle did. He created marvelous stylistic woods mimicking medieval millefleurs designs seen in tapestries from the Middle Ages such as The Lady and the Unicorn Tapestries, the Unicorn Tapestries, and most importantly, the Shepard and Shepherdess Making Music tapestry.

The tapestry, Shepard and Shepherdess Making Music, was brought to life by Earle in the above scene of Aurora and the Prince dancing in the woods. While the soundtrack of Tchaikovsky’s tune plays aloud, the viewer is absorbed in the background, illuminated with millefleurs and medieval foliage. It’s not a coincidence that the Shepard and Shepherdess Making Music tapestry depicts medieval courtship through music similar to the Sleeping Beauty scene.

Woven into the tapestry are two quotes. Above the Shepherdess, it says, “Let’s sing / on the grass / with your bagpipe / a tune for two.” While the Shepard’s response is, “When she sings / her voice is fair / but I do the work.” In the correlative Sleeping Beauty scene, the Prince stumbles upon Aurora singing in the woods…

With a soundtrack based on Tchaikovsky’s 1890 ballet and pictorial roots in the works of Albrecht Dürer, Pieter Bruegel the Elder, Jan van Eyck, and the Limbourg Brothers, Disney’s Sleeping Beauty is considered by many one of the Studios’ most sophisticated productions.

Furthermore, the original film’s opening scene features an actual replica of The Lady and the Unicorn Tapestries in the background. The Met Museum certainly considered the opening scene when planning the gallery layout for the Inspiring Walt Disney exhibition, which ended in March 2022. Because as you walked into the Sleeping Beauty exhibition room, you were placed directly in front of the opening book while the Shepard and Shepherdess Making Music tapestry hung behind it. As a visitor myself, it felt as if I had traveled back in time to medieval Europe with enchanting forests and illuminating scenes.

Overall, the parallelism between Disney’s Sleeping Beauty and the Shepard and Shepherdess Making Music tapestry is truly remarkable. Hopefully, more people will begin to recognize the significance that tapestries from the Middle Ages have over cinema, modern art, and popular culture.