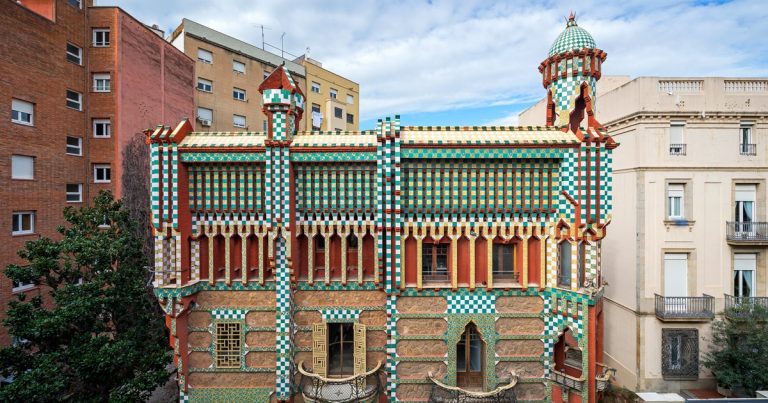 When in Barcelona, don’t miss visiting Casa Vicens, the first house designed by Antoni Gaudí, the famous Catalan architect and author of the great Sagrada Família and Casa Milà. The building is seen as one of the first projects in the Art Nouveau style and houses a museum focused on this outstanding architect’s story.

The museum is attempting to preserve the essence of Gaudí as much as possible, even deciding not to furnish the rooms for an important reason. It is now a living work and we have made every effort to bring back the essence of Gaudí. There are no photos of how the house was furnished in 1885 and therefore it has been decided that it will not be furnished.

Casa Vicens was built as a summer residence between 1883 and 1885; it was designed by the 31-year-old Gaudí for Manuel Vicens i Montaner, a broker-dealer and factory owner in the outskirts of Barcelona. It was the first significant commission of the architect. The house is composed of different forms than those we are used to seeing in other buildings designed by Gaudí. The specialists are considering this building as a part of Gaudí’s Orientalist period which lasted from 1883 to 1888. Hispano-Arabic or Moorish tradition then inspired Gaudí.

After the death of the initial owner, the building was in possession of different individuals. Finally, Casa Vicens was bought by a private capital investment firm in 2014 in order to establish a museum focused on the story of the great architect. The house was opened in November 2017 to the public. Thanks to this initiative, we can today admire the extraordinary architecture of this building and learn about the life of Antoni Gaudí.