The 7 Exhibition. Seven Painters and Friends 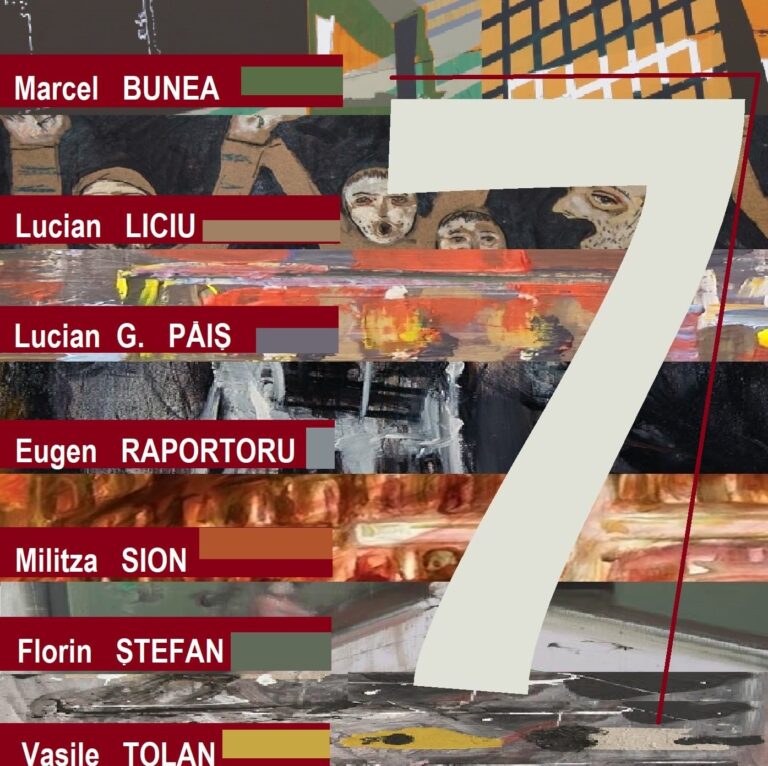 Ecaterina Vrana – Painting as a Diary and a Language

On the 27th of November, a contemporary art exhibition, 7, opened in Bucharest at the National Architecture University Ion Mincu, lasting until January 22nd. The title was chosen because it reunited the works of seven painters, who were also friends, whose works, though different, form an interesting and harmonious whole.

As we happened to be passing the building just a day before where the exhibition was going to be held, my friend suggested we visit it. The organizer, and one of the exhibiting painters, Lucian Păiș, warmly welcomed us to look at the paintings while he took care of the last details of the arrangement. He had the idea of gathering the works of six of his friends – Marcel Bunea, Lucian Liciu, Eugen Raportoru, Militza Sion, Florin Ștefan and Vasile Tolan, for a single exhibition.

Lucian Păiș, originally an architect, organized his debut painting exhibition in 2017. The mixture between the two art forms can be seen in some of the paintings in the 7 exhibition where, apart from the rendering of architectural forms and the interest in light and shadow, the geometrical tendency of Cubism is combined with the more subdued forms of Expressionism; two artistic directions to which the painter feels particularly attached. The effect is one of harmony overriding the initial tension, maybe because of the use of vibrant colors in both parts of paintings are internally divided.

The grouping of the paintings in the 7 exhibition was carefully curated by Lucian Păiș, and the result is an order which shows affinities of vision and form among the seven friends to the viewer.

Militza Sion’s works include many landscapes, in this exhibition and in general, which somehow echo the tendency in Păiș’s works to rediscover consecrated architectural forms. Buildings and entropic landscapes are blurred to the point of becoming liquefied nature landscapes, as in Red City, where movements of light, and the spontaneous work of the brushstroke, create a screen between the human settlement and the viewer.

Eugen Raportoru’s paintings are placed next to the previous two artists’ as he is also interested in architectural (de)composition. While they tend toward the exploring of consecrated forms or dissolution into nature, Raportoru’s works in the exhibition concern a specific space and its architecture, alternating between Bucharest and the eternal painter’s city, Venice. The viewer who knows these cities as a resident, finds the view of crumbling walls, obtained by swift horizontal brushstrokes, strangely concordant at an emotional level with his own ambivalence towards it and its oscillation between times past and everything new.

Apart from these three painters with definite affinities, another who could be considered linked to their view is Florin Ștefan, whose artworks in the 7 exhibition are the least numerous, because they are located in other galleries and exhibitions. His artistic view is defining the discovery of mystery in simple everyday gestures and activities. He moves from the others’ landscapes with no people, to a close-up of the human face and body, depicting places modeled by their existence. These spaces look realistic, but at the same time they are far from the viewer, even though the sincerity is striking. You cannot help but become stuck in a process of getting near and distancing, just you are taken from shadow to light in dimly lit interiors, which remind you somewhat of some genre paintings.

Lucian Liciu’s works are linked to Florin Ștefan; they concentrate both on the human body and facial expression, although Liciu’s paintings are more incisive and critical of contemporary aspects of society, which are presented in a humorous way. For example, the artistic manner of the paintings included in the 7 exhibition is like that of cartoons or caricatures. Masks are also included as a direct reference to today’s world perceived in its chaotic character.

The other two painters whose works are part of the exhibition, Vasile Tolan and Marcel Bunea, are united by their interest in abstract art, although its form is very different in the two cases. The first uses mixed media, such as sand, roots and hay, to create works that strike the viewer through the immediate emotional connection that is formed because of their indefiniteness. Everyone is free to form their own interpretations, but the natural elements are a constant that forms a web of understanding between them.

Unlike Vasile Tolan, Marcel Bunea creates abstract spaces using lines and colors. What results is a highly geometric world in which the disposition of lines of different lengths and nuances is the subject, together with a possible nostalgia of order.

It is an exhibition that leaves the viewer with a sense of homogeneity in diversity. From modernism to abstract painting, everything denotes a common view across the artworks that could be influenced to a certain extent by the close association between the painters.