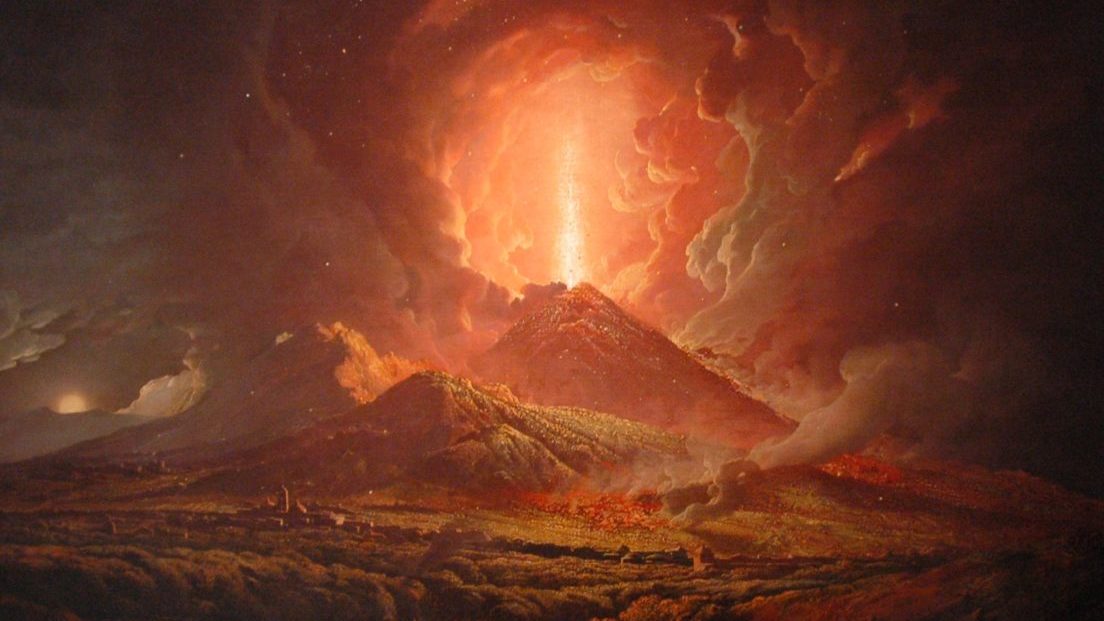 Active volcanoes are great places to visit, but the danger of a potential eruption is always there. When some of them erupted with artists as viewers, it led to spectacular paintings. Those demonstrations of the power of nature are important sources of inspiration for Romantic artists.

Romanticism emerged in the late 18th century in Europe. It rose in response to the cult of reason of its time. The Lumières, Classicism and Neoclassicism imposed their ideas of a world of science, geometry, and accuracy. However, Romanticism expressed itself through feelings and the movements of the soul, often reflected in nature. With Romanticism, artists are free from reason; they are creative geniuses whose inspiration comes from dreams, nightmares, and their own consciousness. They depict fantastic characters or tormented landscapes with bright colors and marked touches.

One of the aesthetic concepts of Romanticism is the sublime. This concept is directly related to nature and the way that humans feel in it. Romantic artists painted nature through what it made them feel. They didn’t paint a landscape, they painted the way they felt this landscape. The vision of nature changed with Romanticism, it was no longer calm and edenic. Sublime nature is wild, it dominates us, but we feel connected to it.

Therefore, beauty and danger can define the sublime aesthetic of nature. “The marriage of attraction and repulsion we feel when we face the furies of nature” (Edmund Burke) is what artists felt when they saw and painted volcanic eruptions.

In paintings of eruptions, the work on the light is central. It is where the sublime fully expresses itself.

Joseph Wright of Derby was a neoclassical artist, but there are pre-romantic influences in his work. On this view of the eruption of Vesuvius, the pre-romantic influence is clear in the sublime character of the painting. The orange bright light that spurts from the volcano catches the eye, it’s almost dazzling. This light is very powerful, it splits the thick cloud mass around the volcano and makes the darkness of the night disappear. The use of chiaroscuro enhances this effect.

In this light stand the two aspects of the sublime: beauty and danger. The brightness of the light is mesmerizing, it attracts each soul sensitive to beauty. However, this light is synonymous with destruction and death. It pierces the sky and burns the earth. The smoking lava at the bottom of the volcano threatens the tiny villages.

Turner stresses this feeling of danger and fear in his painting The Eruption of Vesuvius. His touch accentuates the chaos coming from the explosive light. Traditionally, one opposes chaos and light, darkness and brightness, but here they converge and produce an apocalyptic scene. The orange shades of the lava inflame the landscape and seem to burn it. The rumbling volcano overwhelms the population. Fear makes them run away but, as the light shows them this surreal scene, some of them stay still, fascinated as they are in front of the wonder of nature.

Sublime nature asserts its domination on humanity through the light of the eruption, it is scary but what a wonderful scene!

The Aesthetic of Contrast

We can divide Dahl’s painting in two parts: the volcanic eruption and the peaceful coast. It might seem strange to depict two scenes completely different in the same painting. However, each one gives more power to the other. The vast smoke coming out of the incandescent lava immediately attracts the viewer’s eyes, but the background of the volcano intensifies the effect of destruction carried by the eruption. Dahl makes us see the landscape that the volcano will destroy: The lava flows in its direction. We are therefore confronted with the imminent destruction of idyllic nature.

The Italian painter Antoniani carries this aesthetic of contrast in a different perspective. This view by night draws an opposition between the eruption and the presence of the Moon. These two manifestations of nature are the origin of the light that illuminates the scene, but their radiance is very different: They are opposed in color and effect. The flamboyant orange light of the volcano is synonymous with fire and danger, it is hot and thunders. The Moon, with its greyish light, inspires calm, silence, and peace. This contrast gives the eruption a more powerful presence.

The Torment of Nature

This second painting by Dahl brings the volcano to a whole new level. Here the volcano is not one against all, it is connected with the nature around it. The eruption leads to an outburst of the elements: they take back the earth. The symbiosis of nature shows its power and dangerousness in a scene where no humans belong. Despite their absence, the strong effects of the noises capture our senses. We can hear the rumbles of the explosion and the water crashing against the rocks; we can feel the wind blowing on the smoke and shaking the waves. The painting thus seems to be linked with the viewers.

Pierre Wat (a theoretician of Romanticism) states that nature has meaning only as a symbol of man. The aim of nature and landscape painting would then be the expression of humanity. Dahl doesn’t represent people in the flesh, but we can interpret his raging landscape as a symbol of human torment and complexity.

You might wonder why all of these paintings of volcanoes represent Vesuvius: The practice of the Grand Tour (a formative journey across Europe) was highly developed in the 18th century and Italy was one of the most popular destinations. As for Vesuvius, it had a great activity in the same century, and thus a lot of artists attended to its many eruptions. The iconography of Vesuvius is significant.

French student in history of art, she wants her life to be filled with art, writting is a great way to share this world with all of you.