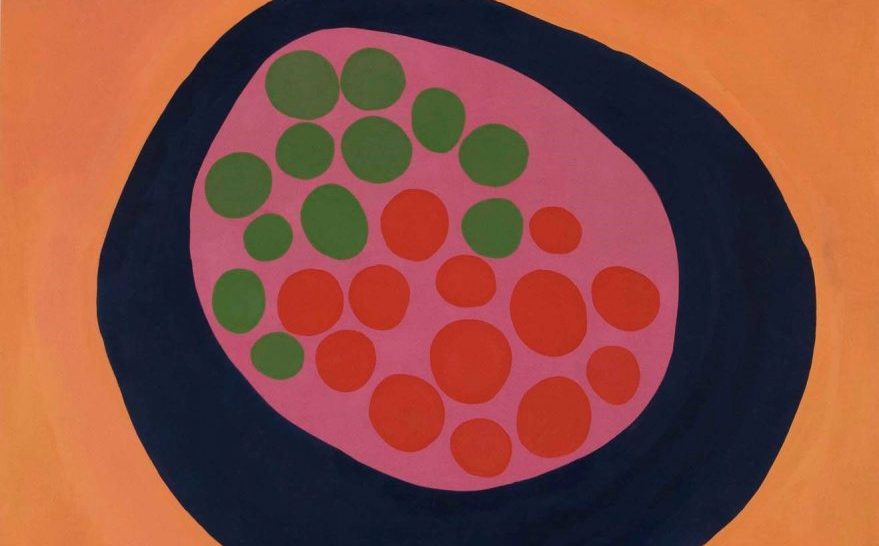 Ready for a rollercoaster ride through the world of color field painting? Strap yourself in, it’s going to be a long and wild ride! This article will explore all you need to know about this art movement, its development throughout history, and its most prominent artists.

Imagine a collision of monumental proportions: popular culture, history, technology, politics and art coming together to form the mother of all movements! This involves fast-moving political and cultural change in America in the 1950s and 1960s, where the horrible carnage of World War II was still reverberating; it involves Abstract Expressionists handling paint in new ways; it involves the discovery of acrylic paint which doesn’t bleed or pool the way oil paint does. Mix all that up, and what do we get? An art movement called color field painting: huge, abstract blocks of mind-blowing color that can make you weep or laugh out loud—paintings with direct access to your sub-conscious mind and emotions.

Color field painting is ideal for the art beginner. You don’t have to worry about “getting it.” You don’t need an art degree under your belt. All you need are your eyes and your emotions – it is purely about the sheer beauty of the canvas and the impact of the color on your senses.

This is pure abstraction: no myth, no religion, no symbols, no subject matter, no figures. Utterly modern and minimalist. With a color field painting, you are directly plugged in to the transcendental. When you stand before such a work you are enveloped, consumed, overwhelmed. The painting isn’t a window into a world, it is a world in itself.

It really all began in the late 1940s. New York artists set out on an exploration to find a painting style that allowed them to express a sense of the sublime in a purely abstract sense. So these art pioneers came up with monolithic canvases of saturated color. It may appear simple or effortless, but it is far from that! There is nowhere to hide in the color field—no people, no flowers, no mountains, just pure pigment.

Color field painting as a term was coined in the mid-1950s by the American art critic Clement Greenberg. Later, in 1964, he mounted a major exhibition for the Los Angeles County Museum of Art called post-painterly abstraction. The exhibition was dominated by large-scale canvases with a minimum of surface details and saturated with vast expanses of flat colour. Greenberg claimed that this work represented the next inevitable step in the evolution of modern art.

“We are creating images whose reality is self-evident and which are devoid of the props and crutches that evoke associations with outmoded images, both sublime and beautiful… The image we produce is the self-evident one of revelation, real and concrete, that can be understood by anyone who will look at it without the nostalgic glasses of history.”

Where did color field painting come from? Perhaps Claude Monet’s huge Water Lilies canvases come to mind. But think also of artists like Henri Matisse and Joan Miró, who were creating huge canvases of expressive color, containing loose figurative drawings or outlines. Richard Diebenkorn was blown away by Matisse’s paintings from 1914, which he first saw in America in 1966. Diebenkorn’s Ocean Park series of paintings are believed to have been hugely influenced by Matisse’s French Window at Collioure, and View of Notre-Dame.

Now we know a little about color field art, let’s get on and take a look at some of its foremost artists. We’ll start with Clyfford Still. He is believed by many to be the first artist to arrive at the abstract style of color field painting, exhibiting first in 1947. His powerful compositions juxtapose jagged flashed of colour contrasting with a thick textured surface. Of his paintings, he said:

“They are life and death merging in fearful union.”

Clyfford Still quoted in a catalogue entry. The Metropolitan Museum of Art.

Perhaps the most well-known of all the artists discussed here, Mark Rothko is famous for his giant rectangular canvases featuring huge blocks of pure hues, hovering over coloured backgrounds. Born in Russia as Markus Yakovlevich Rothkowitz, he emigrated to America at age 10. Rothko did not officially align himself with the term color field painting, but, like his contemporaries, he believed color could tap into our innermost emotions, our biggest emotions. He recommended viewers to position themselves just 18 inches (ca. 46 cm) away from the canvas, so that they might experience a true sense of intimacy with it!

In 1958, in an address to a private university, he gave students his “art formula.” He said all great art must contain the following ingredients: a preoccupation with death, an acknowledgement of human sensuality, tension, a healthy dose of irony, wit and playfulness, the element of chance, and a tiny bit of hope, to make the tragedy of life bearable. Rothko killed himself in his studio in 1970.

Barnett Newman was a lesser-known painter who called himself a choreographer of space. His purely coloured works were banded with vertical or horizontal stripes, which he called “the zip.” He thought of the zip as a flash of cosmic light. Newman’s paintings were on a grand scale and with them he attempted to completely envelop the viewer in vibrant hues.

From the 1960s we see color field painting moving on. One of the brightest later stars was Helen Frankenthaler. Frankenthaler’s paintings made surface and color inseparable. Called “soak stain paintings,” her method was deceptively simple – she would soak an unprimed canvas with thin washes of color pigment, diluted with turpentine. As it dried, it created misty, cloudy fields of color. She continued to experiment with color and printing techniques throughout a career that lasted six decades.

Kenneth Noland was known for his simplified abstract forms, including circles, chevrons, and stripes. These shapes were not intended to depict an object however – they were solely a means of exploring pure color. The colors may complement each other, or contrast sharply with each other, creating an image that seems to vibrate on the canvas.

Alma Thomas, an African American painter, only began to paint seriously after her retirement from teaching, when she was in her 60s. Despite her late start, her luminous, exuberant canvases soon placed her as a key figure in the color field painting pantheon. This success was achieved in spite of the prejudice faced by a black woman in 1960s America. It is thought that she was the first black woman to achieve a bachelor’s degree in art.

Morris Louis Bernstein (he later dropped the surname), would pour viscous lines of multi-coloured paint directly onto canvases to create rainbow effects. Like Noland, he sometimes used a target shape to examine different hues and values of flat color. He pioneered the use of Magna paint, a new oil-based acrylic, and later moved on to the soak-stain painting style, first seen in the studio of Helen Frankenthaler.

Like Rothko, Jules Olitski was born in Russia. His father was executed by the Soviet government and his remaining family moved to America when he was just a baby. In his art studies, he painted wearing a blindfold, to rid himself of bad habits and free up his painting style. Olitski would lay down vast blankets of paint on his canvases with an industrial spray gun. He said he wanted to create color that would hang in the air.

Barack Obama chose to hang a Diebenkorn in the White House, and this artist is considered one of the greatest American artists of the 20th century. He began as an Abstract Expressionist, but he turned to figurative work mid-career. However, with his famous Ocean Park series, he returned to pure abstraction, working on his own unique color language which secured him worldwide acclaim.

Vivid color blocks are the essence of Ellsworth Kelly‘s work. His start in the art world was unusual; he worked on a specialist camouflage unit in the US Army, creating huge sculptural “fake” tanks and jeeps to fool enemy soldiers. After living in France for a while after the war, he moved back to the US and, for more than 30 years, he lived on the outskirts of New York with his partner, the photographer Jack Shear.

Sam Gilliam was an innovator who transformed the world of color field painting. He abandoned the traditional canvas stretcher, instead draping his work across the gallery wall. The swirling, vibrant drapes seem to bleed colors onto the wall. The African American artist was influenced by the Jazz greats to produce free-flowing, improvisatory 3D canvases. These became known as “drape paintings.”

The Future of Color Field Painting

The 1950s and 1960s were a golden era for the color field movement, but the experiment reverberated across the globe, and its influence continues. In the UK, artists like Robyn Denny, John Hoyland, and Richard Smith continued the pure abstraction movement with their own color-saturated, large-scale canvases. Now, international artists from across the globe continue to explore abstract color today.

As stated at the beginning, color field painting is for everyone. But seeing them in a book or on a postcard is not the same as being in the same space as one of these immense works. Now that galleries are re-opening, get yourself in front of a color field painting and immerse yourself. We promise you, it will be a truly mind-blowing experience!

Candy’s remote, rain soaked farmhouse clings to a steep-sided valley in rural Wales. She raises cats, chickens and children with varying degrees of success. Art, literature and Lakrids licorice save her sanity on a daily basis.