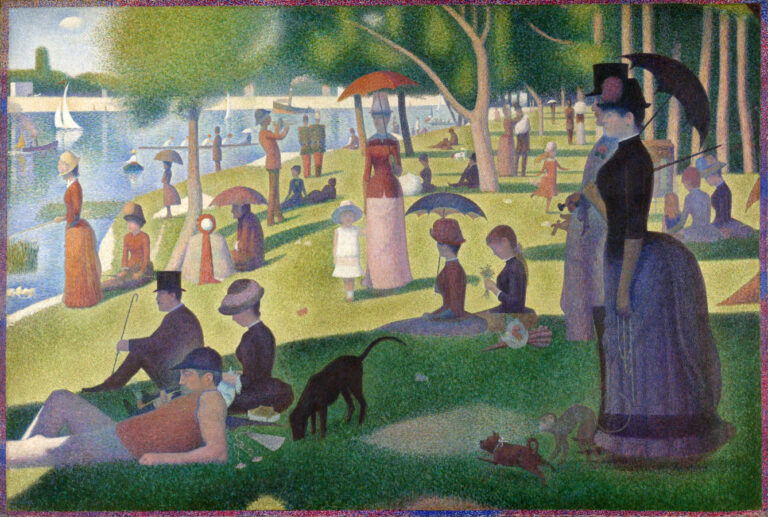 Georges Seurat, The Lighthouse at Honfleur

Spring is shyly approaching in the Northern Hemisphere. Longer and warmer days, more light, and the first signs of nature rebirth encourage us to spend more time outside. There is a famous painting which is the quintessence of outdoor leisure time in a city: A Sunday Afternoon on the Island of La Grande Jatte by the French post-Impressionist painter and draftsman Georges Seurat. Here’s everything you must know about this iconic canvas.

In this large painting, Georges Seurat depicted people relaxing in a suburban park on an island in the Seine River called La Grande Jatte. It may be just an ordinary day with ordinary people. The cast comprised three dogs, eight boats, and 48 people as they congregated for a Sunday afternoon in the sunny park. But, the titular locale was a favorite of prowling prostitutes, so some historians suspect that fish are not what the fishing-pole-toting woman on the left is hoping to hook. The same speculation has emerged around the lady on the right, with a monkey on a leash and a man on her arm.

What is this style?

It is the most famous example of the use of highly systematic and “scientific” technique, subsequently called Pointillism. It relies on the ability of the eye and mind of the viewer to blend the color spots into a fuller range of tones. Seurat himself preferred to call his technique “chromo-luminarism,” a term he felt better stressed its focus on color and light.

What inspired the master?

Seurat embraced the subject matter of modern life so typical to Impressionist artists, but he went beyond their interest of capturing the moment. Seurat sought to evoke permanence by recalling the art of the past, especially Egyptian and Greek sculpture and even Italian Renaissance frescoes. As he explained to the French poet Gustave Kahn:

“The Panathenaeans of Phidias formed a procession. I want to make modern people, in their essential traits, move about as they do on those friezes, and place them on canvases organized by harmonies of color.”

How long it took to create it?

It took more than two years for Seurat to complete the painting. When completed, the artist was only 26 years old! Seurat worked on it in several campaigns and started with almost 60 sketches. Then, he started painting. This sketch, one of the earliest, would have been painted in the open air at La Grande Jatte:

Known as croquetons—literally ‘sketchettes’—Seurat’s studies were all made on small wooden panels. Extraordinarily proud of them, he hung many in his studio. He also exhibited them regularly, demonstrating the significance he felt they had in his oeuvre. Seurat called the panels his ‘constant joy.’

Where it was shown for the first time?

Seurat’s painting, firstly presented at the 1886 Impressionist exhibition was a major turnoff for some critics. Some observers didn’t like rigid profiles of Seurat’s subjects, whose poses were negatively compared to tin soldiers.

Why it has changed over time?

In 1899 Seurat re-stretched its canvas to allow for room to paint a border made up of red, orange, and blue dots. It was supposed to make the whole concept of Pointillism more visible, as well as putting the painting into a white frame. Unfortunately, Seurat employed a then-new pigment, a zinc chromate yellow that he hoped would properly capture the highlights of the park’s green grass. But for years this pigment has been undergoing a chemical reaction that began turning it brown even in Seurat’s lifetime.

Where I can see it?

Seurat died in 1891 and this magnificent work was largely unseen for the next 30 years. The opportunity to view the historic painting returned in 1924 when art lover Frederic Clay Bartlett purchased A Sunday on the Island of La Grande Jatte —1884 and loaned it indefinitely to the Art Institute of Chicago, where it remains until this day.

Henri Toulouse-Lautrec is famous for his portrayals of Paris nightlife: cabarets, theaters, and brothels. He showed us a world of decadence and...

In July 1890, Vincent van Gogh painted one of his best-known artworks, Wheatfield with Crows. The painting is on display in The Van Gogh Museum,...

In a Cabaret with de Toulouse-Lautrec’s Posters

On the outskirts of Paris, a working-class district with cabarets and dance halls called Montmartre became the bohemian center of the city.